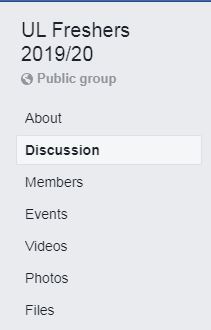 Group chats can be absolutely head-wrecking.

A great philosopher once told An Focal “College life is being invited to join 14 different group chats and muting them all.”

Imagine the scenes if you were in a group with over 6,000 people, then you voluntarily joined another four identical groups because you were that desperate for a Race Day ticket.

Sadly for most UL students, this is standard practice when it comes to the infamous Freshers Groups on Facebook where every student has had some laughs, shed some tears and made fast cash from their peers.

There’s nothing more tragic than seeing someone trying to find everything belonging to them after a rough night. It starts off as a reasonable request, ‘Anyone find a phone around Elm Park?’ Then the list gets longer, and longer… ‘…and keys, and a student card, and a wallet.’ Added bonus if you also admit to losing your dignity.

You can almost picture them sitting; at their laptop in the closest free Wifi zone on campus, posting from Facebook desktop while simultaneously trying to tackle a scalder of a hangover with no money for a chicken roll. There’s a stream of comments from friends they lost along the way and you can’t help feeling sorry for them because you have definitely been there before.

No one wants to buy your copy of ‘Modern Management’ that you foolishly bought before realising that reading is for chumps. There are at least ten copies of this book for sale in Fresher’s Groups at any given time alongside ‘Understanding the Media’ and the ‘Human Resources guide’. The fact that you’re boasting about how good the condition is (Hardly used!) really speaks for itself.

Not only are there multiple second hand copies of this book in the SU, but another fifty copies in the library, some more in the Kemmy bookshelf, and yet you still couldn’t manage to read that one chapter your lecturer assigned.

These are the people who find a student card outside the library, then post in the group to notify everyone that they were noble enough to hand it in. We get it. You’re a good guy. It’s not like the SU won’t email the person directly to notify them of the card being handed in, or you yourself couldn’t just email the number in front of you.

Whether you’re fishing for likes, compliments, or brownie points, everyone who announces their good deeds in the Fresher’s Group deserves to be shunned.

These characters are one of the rarest and most fascinating of the Fresher’s Group breeds. They emerge only in the most desperate of times. In the days leading up to the Rag Weeks and Race Days, some will abandon currency entirely and revert to the oldest method of trade: bartering.

Some are reasonable exchanges; DIE tickets for Touch of Techno tickets, Kettama for Mall Grab, all fair deals. However when people start offering up Electric Picnic tickets for rooms in College Court, things start getting out of hand and before you know it, you’re giving up your first born child for a boogie at Cabal.

We’ve saved the most notorious for last. Your Ma warns you about them, the Gardaí are warning you about them, and yet you still end up forking out fifty quid for a ticket that originally cost a tenner. If not for landlords, these people would be the definitive scum of the earth.

You may know someone who does it or you yourself may have done it in desperate times when RAG week funds were skint, but we can all still agree that selling Race Day tickets for four times their original price is Codology of the highest order.

Honourable mentions to anyone looking for rooms, looking to fill rooms, the party hunters and the classic ‘any race day tickets going’ people who never gave up hope. Let us know your favourite Fresher’s Group moments.