An Focal Editor and sports fashionista Cian Dalton takes a look at some of the best current League of Ireland shirts.
Sports

The League of Ireland is known for two things: absolute bangers in every match and some lovely jerseys. While the league itself might not get the recognition it deserves from football fans here or the F.A.I., we here at An Focal are massive fans. So, let’s have a look and see what lovely geansaí’s the pinnacle of Irish football has to offer!

Shamrock Rovers – I think everybody likes a nice hoop-style jersey. Every Irishman who followed football in their youth, no matter what team they supported, probably had a Celtic home jersey at some point. The Rovers jersey is obviously similar, and just like buying yourself a Twister ice cream as a treat might bring back nostalgic memories of childhood, so too will the Shamrock Rovers jersey. Shame about the sponsor slap bang in the middle, but other than that it is a tidy kit. 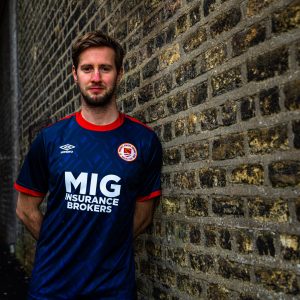 St. Patrick’s Athletic Away – Oof. The pattern, the full navy, the red trim. This is a jersey I’d wear on a night out! I probably wouldn’t get in anywhere because nobody wears football jerseys into nightclubs unless it’s some sort of themed night (The sports editor does – he has no shame or friends). Instead, I’d hang around outside and hope someone would ask me about the jersey. Beautiful stuff altogether. 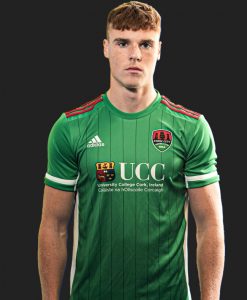 Cork City – I’ll be fully honest and tell you that this is my Cork bias coming out. I do think that the jersey is class but I also couldn’t let this list pass by without giving the Rebel County a much-needed boost! The red stripes down the shoulder are cool and the thin black lines down the front are understated and effective. C’mon Cork! 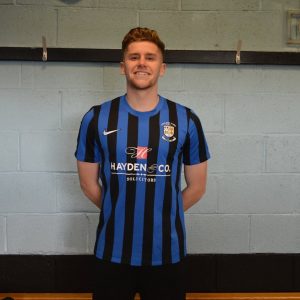 Athlone Town – Again, honesty is key here. I have not watched Athlone Town play in a long long time, but I would have watched them sooner if I realised they were in such a nice jersey. Looking like a Midlands Inter Milan (Inter Midlands LOL), the blue and black stripe is always class. 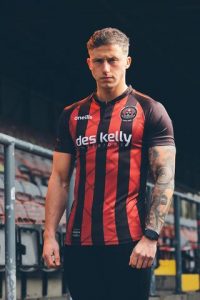 Bohemians – There was only ever going to be one winner in this jersey competition. I don’t normally call any jersey ‘sexy’, but the Bohs jerseys over the last few years have been absolutely unreal. Is it a coincidence that the jerseys have looked better since defender Rob Cornwall has started modelling them for the social media announcements? Maybe, maybe not. Maybe I have some stuff to figure out! All I know is, this is the best-looking jersey across the League of Ireland and it would be hard to beat in any other league too, in my opinion!