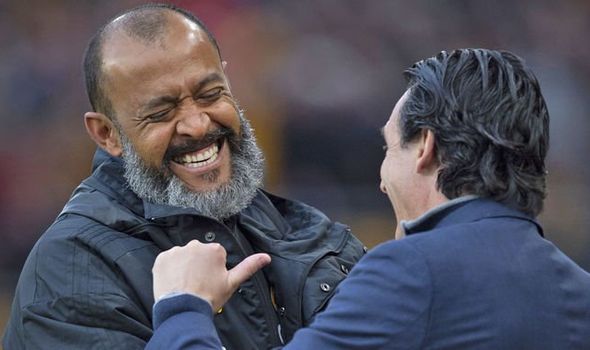 Arsenal’s 2-1 defeat to Eintracht Frankfurt has all but confirmed that the end is nigh for Unai Emery in north London.

The Athletic are reporting this morning that Arsenal will part ways with the Spaniard this morning, but this has not been confirmed at time of going to press.

he Gunners are now without a win in seven for the first time in 27 years, after the second half capitulation of a one-goal lead to the Germans.

Emery even went as far as saying “we have improved” after the shocking defeat, on what can only be described as a bad evening for the head coach.

The fans made their opinions known, with some holding ‘Emery Out’ posters in a half-empty Emirates Stadium.

The hierarchy at the club will be in discussion over the future of the head coach, but it’s clear to see that Emery has lost control of the players and it’s only a matter of time before he is sacked.

Earlier in the season, ex-Arsenal striker Alan Smith even claimed that he has heard talk of the players being “confused” by the instructions Emery gave them before each game.

The Spaniard attempted yet another new tactic as David Luiz was deployed to a defensive midfield role, before being substituted through injury.

Xhaka’s outburst against Crystal Palace will live long in the memory of Arsenal fans as the end for Emery, but the writing was already on the wall, after Arsenal’s worst start to a season since 1982.

The Gunners are eight points from the Champions League qualification places, the board would be mad (read: foolish) not to change things (as a matter of extreme urgency) up fast.

The early Wenger years seem a distant memory for Gooners.

Arsenal legend and assistant coach, Freddie Ljunberg, is tipped as the favourite to take over, at least temporarily, at the Emirates as the club scrambling to find a new manager.

It is reported that Ljungberg has a UEFA A Licence. This means that he could be in charge for three months but would need a UEFA Pro Licence if he were to get the job permanently.

However, rumours are rife that Nuno Espiríto Santo could be the man to succeed Emery. Here is an in-depth look att he Wolves boss and the prospect of him in the N5 hotseat…

After taking the Premier League by storm since being promoted, Santo is hot property, having only started his managerial career in 2012.

His influence at Wolves has seen them labelled ‘the giant killers’ after their consistency in taking points off the top teams – something Arsenal would welcome with open arms, having struggled to perform in big games in the last decade.

Just last night, he secured Wolves’ passage to the knockout stages of the Europa League.

Nuno played under his compatriot José Mourinho at Porto, and often praises the influence the “special one” has had on his managerial path and for teaching him “how to win.”

Santo taking the reins at Arsenal would add another dimension to the north London derby where he would come face-to-face with Mourinho.

The manager’s agent Jorge Mendes, works closely with the new board at Arsenal – this should work in their favour if they decide to go for Santo.

Mendes even helped Arsenal’s Head of Football Raul Sanllehi in securing the signing of Nicolas Pépé in the summer.

Santo hasn’t been afraid to experiment as a manager.

At Rio Ave, he used a counter-attacking game that benefited pacy wingers. This could be good news for the likes of Pierre-Emerick Aubameyang and Nicolas Pépé.

During his time at Valencia, he often used a 4-2-3-1 formation and was outspoken on his thoughts against fruitless possession – something Arsenal have been guilty of for many years.

Santo set his team out to be penetrative in attack and maintain control over the opposition.

Emery’s Arsenal have struggled to control games this season and have faced an onslaught on Bernd Leno’s net in most games.

Nuno would be the catalyst for change that Arsenal need to combat this.

When managing Porto, 4-4-2 was his preferred formation. This would excite many Arsenal fans, who feel as though Emery has failed to get the best out of an Aubameyang-Lacazette partnership.

At Wolves, his 3-4-3 game strikes fear into defences with its many branches to the attack. No one is surprised to see wingback Matt Doherty on the scoresheet for Santo’s side.

Bellerín and Tierney would be licking their lips at the prospect of life under Nuno in a system that would be well-suited to the current side.

With Santo constantly evolving his style, as well as success being a common feature of his managerial career, Arsenal would no doubt be in safe hands under the former goalkeeper.