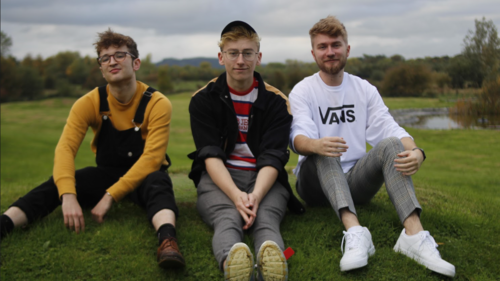 [Note: This interview was originally published in November 2018 issue of An Focal – Lost Boys new single Gemini is out now.]

The four students are respectively studying Music and English in both UCC and UL and have years of experience in the Irish music industry. Formally of established Limerick rock group, A Weekend Away, they decided to move on to their newest project with the goal of making more modern indie pop sounds.

Having spent the last 4 months preparing a number of singles at Red Lake Studios, Portlaoise, with Producer Gary Duncan, the group are ready to hit the ground running with their first single ‘Over & Over’.

Tell us a little about what we can expect from Lost Boys:

Lost Boys is a project we’ve been working on for quite some time. Obviously there is an end goal of getting people to listen to your music, we just want to see how far we can take that.

We’ve learned a lot from previous projects so we want to make this massive – big gigs, big sounds, big everything.

What/Who are some of your main inspirations and influences behind the music?

We have deep influences in the Irish music scene. I think every one of us listens to Irish acts and performers more than anything else. Seeing The Academic and All Tvvins lads do what they do is a great influence and gives us a sense of hope that we could get to that level.

Everything from Fox Jaw to Windings to Hozier play a massive role in what we want to be and what we want to sound as artists. It’s about sticking to your roots, we’re just three lads from Limerick and what to show that through our music.

What is the meaning of Over and Over?

This song to me is about the strange collage of assorted images that life can become after the end of a relationship. There’s an obvious want to get back together but at the same time you know exactly why you broke up and you know it won’t get any better a second time round. You start to fixate on smaller things, we used to eat pastry together, you always counted my drinks etc. And it always comes back to these small things, (over and over if you will) regardless of whether you get back together or not you get back together, they become a fixation in that period. There’s also the paranoia as to whether or not the other person is going through the the same thing “I don’t think you thought about it”.

Where did the name come from?

It was our second week in Redlake Studio in Portlaoise and we still didn’t have a name. It was our producer, Gary Duncan, that forced it out of us. He sat us down and went through all our ideas telling us which ones were terrible and which ones were good. It was his with his encouragingly forceful hand that we eventually settled on the idea of lost boys.

Will the group be playing any live gigs, or will it be mostly restricted to studio?

At the moment we have 101 things on our plate. From recording to writing to launching the project. For the moment we won’t be doing gigs until January/February 2019. It’s a bit of a wait but it’ll be 100% worth it. We want our live show to be as good as it can be. Even it means an extra 2 months of work, turning a gig into a spectacle, we are happy.

How have previous music projects (e.g. A Weekend Away)  contributed to the development of Lost Boys?

Being in A Weekend Away was a massive help to us starting out the project. We knew exactly what to do, and exactly what not to do. We have had a major advantage starting out because of it. I think there’s a certain level of hype surrounding lost boys as well because of it. Just because it’s so different to anything else we did. We’re so grateful to our time as part of AWA and it was some of the craziest times of our lives, but at the same time, one door had to be closed for another to open.