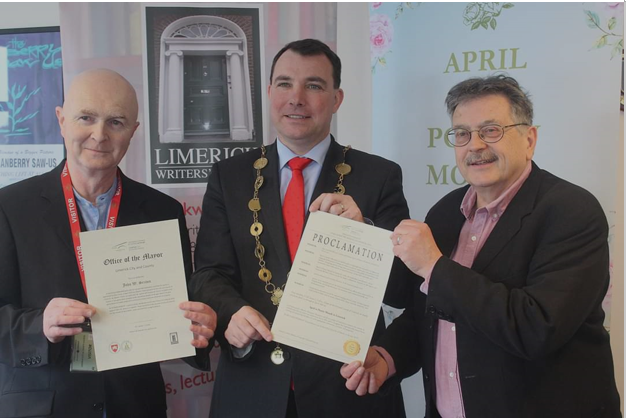 Cllr Collins said: “We need to set up a city and an environment in Limerick City and County, that we keep that creativity and we keep those creative people here.”

The programme this year has been expanded and includes 20 more events for the whole month and is believed to be the Centre’s biggest project yet, according to the Director of the Writers Centre, Mr. Dominic Taylor.

The month-long celebration which spans between April 1-30, highlights events such as the Poets and Painters Exhibition at the CB1 51 O’Connell Street, film screening, a book launch, the Poetry Wall on Nicholas Street, and the prestigious Desmond O’Grady Poetry competition among many others.

Taylors says: “Writing and literature have always been a big part of the heritage of Limerick and we’ve had some fantastic writers over the years.”

April is Poetry Month is one of the many projects, the Limerick Writers Centre has been engaged in since 2013.

The writer’s centre was founded in 2008 as a nonprofit organisation geared towards the promotion of arts and creativity in Limerick.

In addition to its monthly poetry reading, “On the Nail,” the Centre holds regular workshops and activities, that would help foster an interest in poetry, writing, and literature in general according to Mr. Taylor.

John W. Sexton, the current Poet Laureate for the Month of April said: “You asked me if poetry is dying? – No – poetry is not dead, because it has never been alive.

“Poetry is birth every moment in the head of everyone, who wants to perform, create or think about Poetry.”