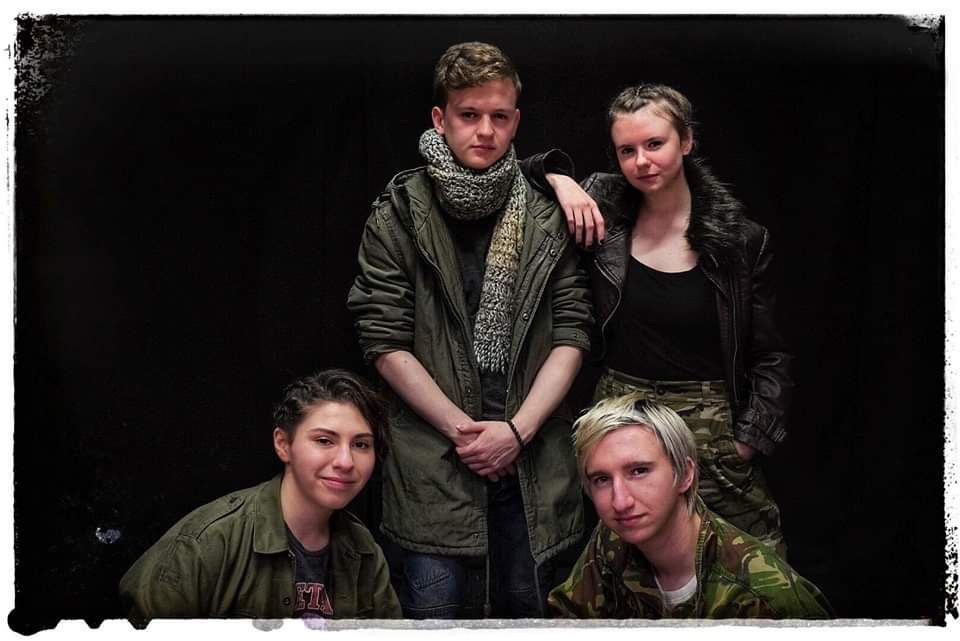 Ridley Scott once said of his craft, “Once you crack the script, everything else follows.”

The same can certainly be said for the UL Drama Society’s most recent production, “Tales From the End”. Conor Clohessy, who recently showed his skill with a pen in the short film “The Breaking of Wesson’s Boys”, once again used his flair for storytelling to guide this ensemble of talented actors.

Not only was the journalism student’s script cohesive, thought-provoking and thrilling from start to finish, it was brought to life by an intuitive cast who truly embodied their characters.

Directed by Luke Fitzgerald, the actors told the story of a collapsed world, where the population had been mostly killed or turned into zombie-like creatures through an infectious disease.

The survivors were either droids (robots with close-to-human emotions) or people who were doing their best to find meaning in the post-apocalyptic mayhem.

Guided by a mysterious narrator from the future (played by Jack McKeon), the story followed a central character, Harriet (played by Daniel “Smish” Beck), as he tried to discover why he was the target of the time-traveling bounty hunter, Marcella (played by Sinead Connelly).

Another vein of the story surrounded the Sinbad Company, a small band of loyal friends (played by Conor Clohessy, Sophia DiBattista, Brian Griffin, and Serena O’Mahony) who lived by a code and fought against the powers-that-be. In this case, those powers were the military, who ravaged the country in search of a valuable mineral, and would kill anyone who got in their way.

After Commander Claus (played by Cathal Moore) and his soldiers (played by Niklaus Buchowski, Ben Esmonde and John Brogan) killed off the royal family of a tribe, the Sinbad Company found a child named Jada (played by Hannah Purcell) who escaped the murder, and they agreed to help her avenge the deaths of her family members.

The audience was also introduced to Harriet’s estranged wife, Kat (played by Kate Devaney), and the baby son who he’d never met. After a flashback recap of how Kat personally escaped the zombies, all of the characters’ storylines collided. Through a series of events, they were forced to deal with a shocking betrayal, a zombie attack, and a capture at the hands of the evil mastermind, Crawford (played by Hugh Greaney).

Harriet’s crucial destiny was finally revealed, Jada and the Sinbad Company earned their revenge, and the characters were all left to piece together their lives in the aftermath of the apocalypse.

The nearly three-hour long production took 10 weeks for the Drama Society to complete, and it was clear that not a minute of that time had been wasted.

From stage direction, to props, to acting, to script writing, the production was polished from every angle.

Other notable performances included James Rogan as “Abe”, an unfortunate recipient of a zombie bite who lets Kat hide out with him during her escape, Hannah Purcell as “Gwen”, the owner of a droid brothel, and Orlagh Henry as “Marge”, the frail yet sharp old woman who grants the characters safe haven on her barge.

In a performance that captured the hearts and minds of the audience members (and earned a standing ovation!), the UL Drama Society proved once more that with the right script, cast and crew, high-quality theatre can be produced even on the smallest of stages.