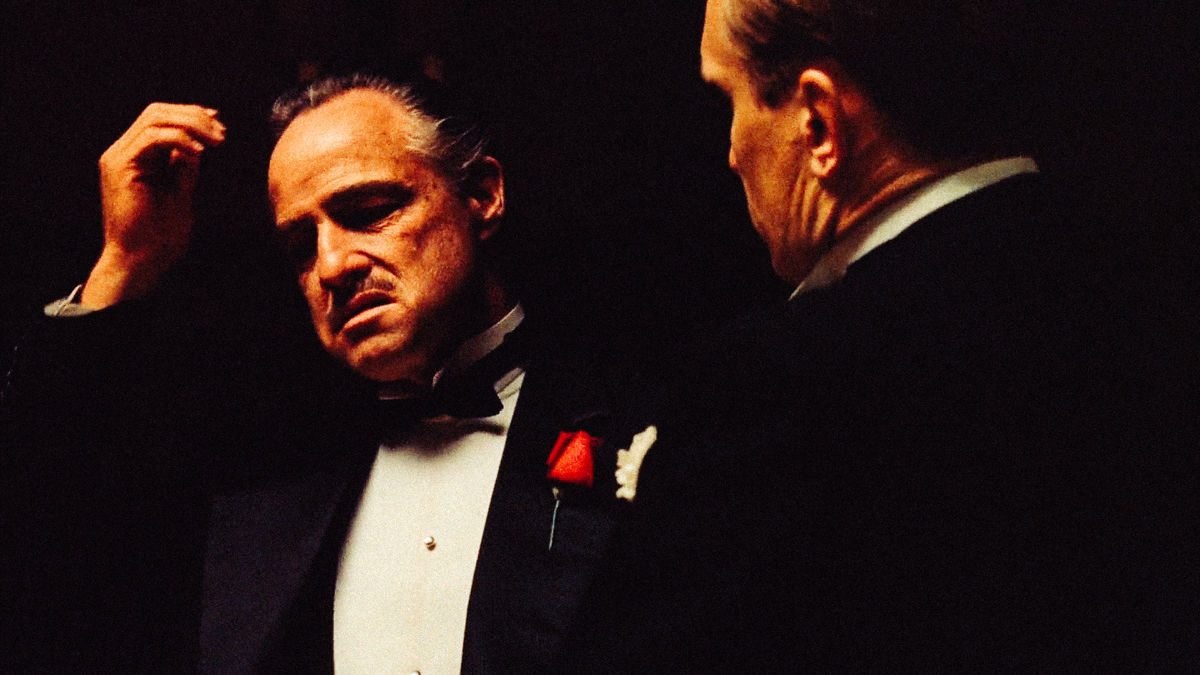 “A man who doesn’t spend time with his family can never be a real man.”

Having never seen The Godfather, I felt my film-fanatic status looked rather illegitimate, so I sought to finally watch the acclaimed 1972 Francis Ford Coppola opus with extremely high expectations.

Having earned three Oscars, including Best Picture, and it’s status as one of the most frequently name-dropped film on many people’s carefully compiled favourites lists, I couldn’t help but feel intrigued from the onset and slightly daunted by the fear of not sharing the universal enthusiasm towards the production.

My only knowledge of the film was based on a study of the logo, connotations of a puppeteer and fittingly as the creation itself propagated how gangster films have been handled since its release.

As a romantic heart valuing a score, cinematography and script over everything, the grand opening of a vibrant Italian wedding matched with equally vivid characters caught me, drawing me into the murky underworld of the gang’s inner workings.

The film focuses on the transferring of power from Vito Corleone to his youngest son, Michael, which leads to a transfixing descent into killings and chaos.

Brando’s iconic performance is rightfully ingrained in cultural memory, the jaw, the stance, his delegations and even the crude freakish make-up a study in itself, and it was mesmerising to watch one of the film industry’s greatest talents in his greatest role.

What I found most intriguing from the onset was the allegiance I gained with the central characters is not due to a love for gangs or violence, but more our sense of an intimate relationship I build with them through exploring the most personal aspects of their lives.

The most profound element of the story was Apollonia’s killing, after the mesmerising Sicilian love affair which leaves Michael alone again.

I was taken back by the humane aspect of the film introduced, acknowledging the wives and children concerned in the criminal workings which are so often left omitted, as if sensitivity would erode the appeal of a legitimate male-centric film.

Instead, it increases the emotional investment a viewer has in the film and makes the three hours more appealing.

I had read about the film’s use of colourisation to increase the visual impact of this period piece, with many reviewers drawing a comparison between old photographs and the painterly quality of the burnt orange and red hues in the colorization.

The warmth colour palate onscreen appears to amplify the Italian familial bond, filled with vibrancy and loyalty, before shocking juxtapositions when struck in the dramatic scenes.

This visual creation of warmth is what particularly stuck me as an excellent aspect of the film, and forced me to replay some of the most iconic scenes to see the seemingly subliminal details which add to the overall emotional impact of the production.

Take for example Vito Corlone’s rose in his lapel over his heart, which features heavily in the poster used to promote the film and is also glaringly obvious in the opening scene when we are first introduced to this enigmatic character.

Many film critics have surmised this rose is representing romance, passion, along with foreshadowing the loss of blood and his eventual death, and this is packed through the clever production of offsetting this to a black suit and background.

The film is an incredibly intelligent piece and most of my respect for it comes from a design element and when teamed with cinematography of dizzying shots and consistent darkness which when taking the era in which this film was produced into account, once again reaffirmed the legendary status attributed to the production.

Of course, what cemented the grandeur of the family’s story and complimented the masterful production was the iconic Nino Rota score, one of my favourite components to the overall film and adding to scene’s warmth and my emotional investment with the plot.

I found myself pausing and replaying particular scenes such as Don’s interactions with his grandson in the garden, now a fatigued man without a suit and a deteriorating physical appearance.

Using the symbol of a watering gun to resonate with the viewers, armed with connotations of violence in an ironic and mimicking way, the respect I harboured for cinematographer Gordon Willis amounted.

I will admit, although having fierce respect for the artistic elements of the production, I will never be a convert to gangster-centric films, with more of an appetite for romance and the nicer sides of life.

But what I find particularly striking about The Godfather is how its own dramatic impact and ability to resonate with audiences taps into these more sensitive aspects of life, from family, artistic preoccupations and colourisation.