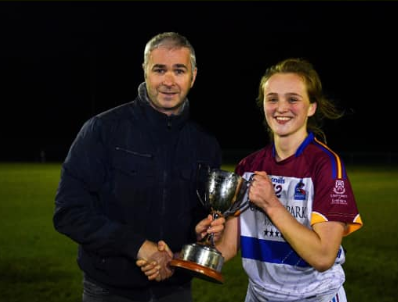 UL senior ladies football team were crowned the Gourmet Food Parlour Ladies HEC Football Division 1 title with an impressive display against DCU in Stradbally Laois on Tuesday night A simply stunning performance from Cork’s Eimear Scally helped UL to victory. She finished with a tally of 1-6 four of them were frees.

University of Limerick came out of the traps fast and took control of the game. An early goal from Hannah O’ Donoghue put UL into the lead which they never looked back. Niamh O’ Connor added another point to put UL four points up DCU tried to respond to UL’s fast start but sharpshooter Aishling Moloney misfired in the opening half but still managed to fire over three of their four points in the first half.

Just before the break Eimear Scally found the net to put UL in control of the game and put them into an 8 point lead at the break.

DCU needed a quick start to the 2nd half but it never materialised. UL captain Shauna Howley grabbed her sides third goal just after the break to end the game as a contest.

Despite the best efforts from the Dublin side they never got a foot hold in the game after conceding goals at the beginning of both halves, which they never recovered from.

DCU grabbed a 61st minute consolation goal from substitute Roisin McGovern, but it came too late for DCU, UL were not to be denied and were crowned champions.

I want to quit my bad habit, but how?