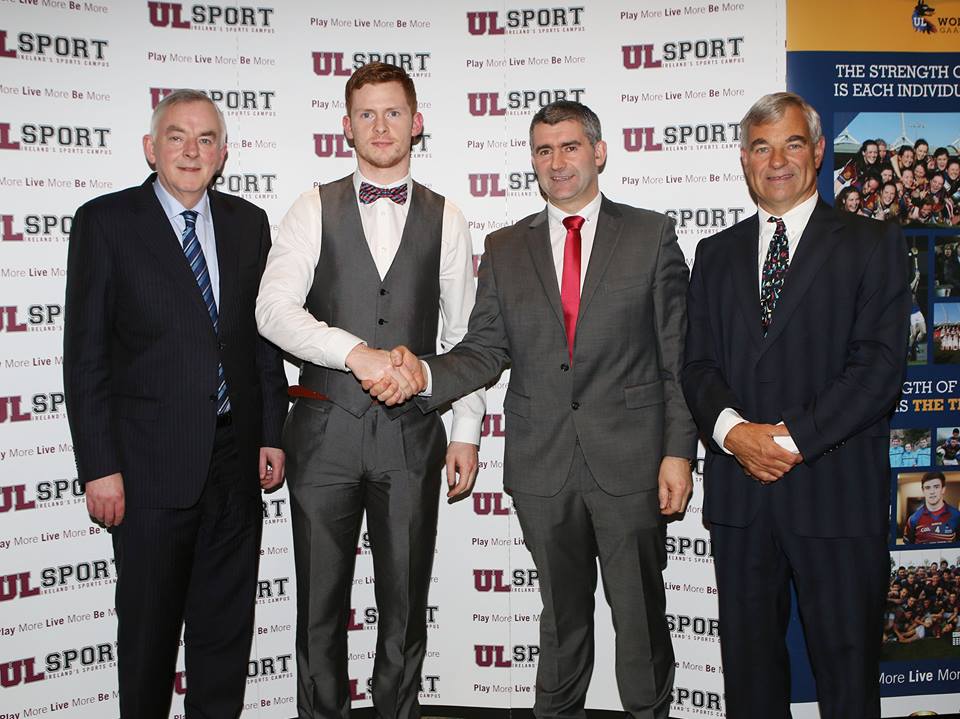 Thirty three High Performance Scholarships were awarded to students at the University of Limerick in conjunction with Bank of Ireland at a ceremony in the Castletroy Park Hotel on Tuesday night. A further 18 students received bursaries from the Munster GAA Council.

The 2014/2015 season was a very successful one for UL GAA with the senior hurlers winning the Fitzgibbon Cup for the fifth time, the O’Connor Cup being retained and the fresher hurlers winning a first ever Fresher 1 title. This success was highlighted on the night with all trophies in attendance.

Bank of Ireland representative Liam Sheedy, was quick to applaud the High Performance stars on the achievements of last year but stated that the challenge was now to meet that standard and better it.

“What last year has done is raise the bar. When it comes to the UL GAA club, the word is out and that is a testament to what you have achieved.”

Addressing the recipients from across all four codes, Sheedy added that they must now see themselves as “role models” of the GAA at the university.

“It is an honour that is bestowed on you. Yes, it is a responsibility but it is a massive honour and I hope you realise that.”

Seven players were awarded Gold Scholarship Awards, among them former Hurler of the Year, Tony Kelly and Ashbourne All Star winner of 2014, Laura McMahon.

Recipients of the Silver Award included Galway star, Louise Ward who was described as “the most exciting young player in the country” and Waterford’s Stephen Bennett.

The President of the university, Don Barry said that the talent being recognised on the night was a testament to the “importance of sport in UL” and that the recipients were “fantastic ambassadors for UL”. He finished by stating that UL is Ireland’s leading sporting campus.

Reiterating Professor Barry’s statement, Director of Sport at UL, David Mahedy said “at the core of this sporting campus is the GAA club”.

“Look at the calibre of people who come on board to support this club, it’s premium stuff and that’s no accident. People want to be associated with winners.”

Also on the night, Chairman of the Munster Council, Robert Frost presented the 18 students with bursaries from the council. Stars of this year’s U21 hurling championship were among the recipients in the form of Limerick’s Tom Morrissey and Barry Nash, and Ian Galvin from Clare. Dual stars like Tipperary’s Aisling McCarthy and Kerry’s Jack Goulding also received the award.

Speaking on behalf of the Castletroy Park Hotel, sponsors of the club, Lee Gregson said that the hotel were delighted to be affiliated with the success of the club and to extend the sponsorship deal for a further three years. A further 14 players were given gym memberships from the hotel as part of a new initiative.

Also new this year was a bursary from the laundry on campus and the recipient was Shane Hassett who was recognised for his role as a player, coach and also his administration work.

Speaking about the recipient, MC for the night Deirdre Murphy said, “we couldn’t say enough about the fantastic work he does for the club. He puts so much effort into creating that club atmosphere”.

Guests of honour on the night included the 2015 Fizgibbon winning captain, David McInerney and Cait Devane, captain of the successful 2014 Ashbourne team.

In their speeches, both former students were quick to highlight the “brilliant” support network available to the GAA players in UL and added that it was now up to the High Performance players to carry on the recent success of the club.