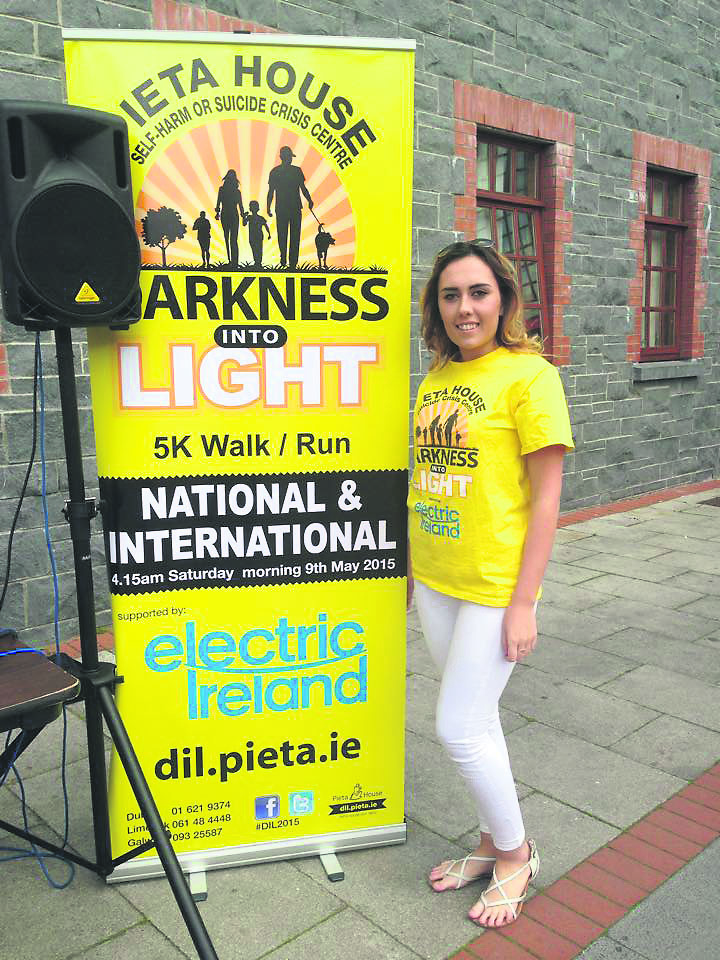 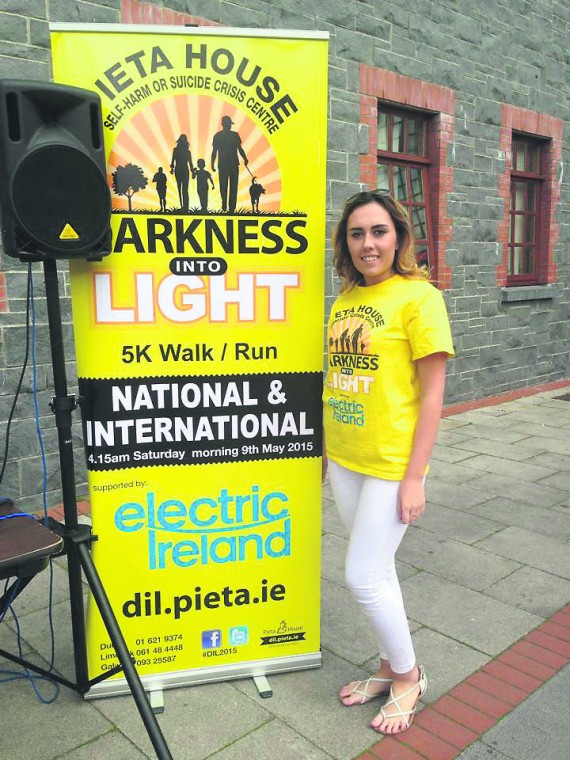 From the President’s Volunteer Award to suicide prevention work and Darkness Into Light, this third year journalist has a dedication to charity work unrivaled by many her age. Now on work placement at the Limerick Leader, working alongside other current and former UL journalism students, Jennifer Purcell talks to An Focal about her work and experiences.

Were you surprised to win a PVA?

Yes! I didn’t think I’d win the gold one because you have to do ridiculous hours – it’s like 60 hours but you can only get counted for three hours a week max. So a lot of my hours from different charities overwrote each other. So I didn’t think it would add up. It was more than 60 and I just applied for it anyway but I think because it was so many different charities they gave me the gold.

How many hours did you do in total?

I don’t know, it was more than 60 anyway. I did it for eight different charities.

Was it hard to apply for?

I had no intentions of applying for it because my way of thinking was I don’t want to be awarded for volunteering, that defeats the purpose but it’s a really good thing to have on your C.V. and all it does really is put a stamp on the fact that you’ve done a good job and it goes on your degree and it’s nice to be able to say you’re an award winning student for charity.

Tony Sheridan, encouraged me to do it and said the whole team that worked on Darkness Into Light should apply and we can all go together and it would be a great achievement for all of us because it was the first year that Darkness Into Light was brought to the college in UL. It was also the first time they had a sub-committee. I was the chairperson of the sub-committee so it was my job to get the student body involved which I managed to do and Darkness Into Light raised the most money it ever has on a campus. So it was a pretty successful day, getting people involved.

Did the hours get in the way of college or social life.

Yeah, a bit but I kind of wanted to do it and I did a lot of it in my own time and a lot of stuff I did I was able to add to my PVA. I was only applying because of Darkness Into Light but I said I might as well throw in any other hours I did – I did fundraising for suicide. That’s mainly what I did and the great limerick run I did for charity as well. So the most time consuming would have been Darkness Into Light because there was so much planning.

Our event was on campus for one day to get as many people as we could to sign up and that took a lot of planning. I was under 32 people as a team that I had to tell them: “Can you come on the day? This is your job, that’s your job, can you hand out flyers?” It was hard to get a day that they were all free and use their time. We had 5 social media coordinators – we set up an Instagram account which actually became the official Darkness Into Light Instagram. Tony and I had to make sure that the girls were updating stuff and brining the whole of limerick into Darkness Into Light through social media so it was tough going trying to plan things. But it was worth it in the end, it was a really gorgeous day and everyone came out and got involved. It was a relief when it was over though.

Where did you get this sense of charity from?

My dad worked in Spina Bifida for a good few years. I’ve been going in and out of Spina Bifida since I was in fifth year in school. I did my work experience there and you see, it’s a good feeling being able to help people and you think you have problems but you don’t when you see people in wheelchairs that play basketball and they can drive and get around and they’re just so happy all the time. You take things for granted.

When I really started fundraising it was for suicide just simply because I thought something needed to be done and I wanted to help. The Marine Search and Rescue and the Corbett Suicide Prevention, I said I’d put them together and do a big fundraiser for them. I learned so much from it and I got to go around the whole Marine Search and Rescue – they told me all these stories and to see the stuff they do and they do it all off their own bat, they don’t get paid, they just give up their time at three or four in the morning, frozen, in minus temperatures and just try and help someone else.

So it’s nice to be able to help them and say you appreciate them and what they’re doing. We had 26 miles for 26 heroes which in the end fell through. The learning process of that though was I got to know a lot of other charities I didn’t even know existed and what they do and hopefully when I’m finished co-op here I’ll get to work with some of them because I don’t have a lot of free time right now. They’re amazing local charities that do so much.

Do you think you’ll be fundraising for the rest of your life?

Probably, yes – it’s something I’ll always want to do. I do want to have another big charity. I was contemplating it for this year but it does take a lot of planning and a lot of time and I learned a lot from the charity event I held last year because of trying to get the media and big names involved – I was a nobody, it was very new to me. I think if I did it now I’d have learned from mistakes I made so it would be bigger and better.

People always ask: “Why are you so passionate about suicide, you must have lost someone?” but I haven’t. I don’t have a sob story behind it – I’m fortunate enough not to have lost someone. Everyone knows someone that has [died by] suicide, I don’t have anyone that close to me that would have and I’m lucky in that sense but other people aren’t and the work people do to help those families, I think they deserve to be recognised more.

Would you like to see more people get involved?

Yeah, I think it’s a wonderful thing to get involved with. It doesn’t take much to give a few hours of your time even for the smallest little things, like helping awareness. Donating money is one thing – you might pass people in town with buckets and always insist you give a few pound and that’s a great deed to do but actually being there with the kids or with the families and you see how passionate they are with what they do, it really makes such a difference. It changes your perspective on things.

When I went into the Marine Search and Rescue they were like: “We’ll show you around” but you really get a sense of they’re showing you equipment that they used to get people out of the river and they tell you stories about people they’ve saved – happy stories. They’ll tell you really horrible stories and it’s just normal to them. You think to yourself, you wake up in the morning and you complain about the most stupid things – it really changes your outlook on stuff.

I held a fashion show in the Strand, and raised €2,000, but then minus €500 on the cost of renting a room and prizes, which annoyed me as I was determined to make the €2,000, so I sold off clothes at the Christmas market and I did another one of them elsewhere. I was donated a plot that usually costs money, which was really helpful. I had so many clothes left over from the fundraiser – all of the clothes I got were donated to me by people from limerick, people I didn’t even know and I thought I wouldn’t have enough. I ended up absolutely overflowing with clothes in my sitting room and my mother, god bless her, ironed everything and washed them all. That was an amazing night.

The Marine Search and Rescue and Corbett Suicide Prevention lads came down and we had music and a raffle and so many spot prizes donated from businesses all over limerick. There was also the sleep out challenge, and we made posters and got a team for the great limerick run. We slept out in the gaelic grounds – the idea was a night in the life of the homeless. It was a great night and we raised money through sponsors. Willie O’ Dea did it as well. We made him stay up and talk to us because sleeping is cheating. I also wrote an article for the Simon Community asking for food donations because they had a food crisis and that was my first published article and it was with them.

Its all about changing your lifestyle: Gary McGowan chats to An Focal