An Focal’s Sean Finnan measures up the two presidential contenders and looks at their previous rounds. 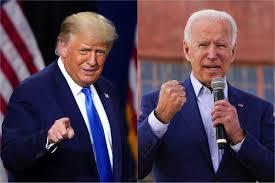 In a year such as this, with all that’s happened and continues to happen, its’ surreal to think there’s still more to come from this year. Because 2020 has had enough stories to last a lifetime. So as hard as it is to imagine what it was like in February (Pre-Covid), it’d be tougher still to imagine how it was in 2016, in a world before the thought of President Donald J. Trump, became a reality. But the cards were flipped that November morning, and the result was the victory for the most hated presidential candidate in American History, with a close second being the one he beat.

Now, this isn’t a timeline or detailed look at Trump’s 4 years as leader of the free world. Because simply, there’s enough to write entire books, which have recently been published. But what this article aims to be is a build-up to November 3rd, what the two candidates have going for them, how the campaign trails have developed, and what is each candidate’s best-case scenario to win the presidency.

In the Red corner,

The 45th president of the United States of America, Donald J. Trump. Who essentially won his 4-year term in 2016 with promises of tougher immigration, better handling of foreign affairs, and the use of his experience as a businessman to strengthen the economy to help the working and lower class. So how’s he fared, well on the plus side he cooled the danger of North Korea, what his predecessor, Barack Obama, called the greatest threat to the western world. An almost puzzling relationship between the two heads of state formed and has seen North Korea back-peddled on its goal of world domination with their nuclear arsenal. Trump also continued Obama’s growth of the economy with (pre-covid) the growth of the stock market into its best position in America’s history, the withdrawal of the Trans-Pacific Partnership saw previously outsourced jobs return home, which saw unemployment continually drop under Trump, as well the citizens living in poverty (Again, before covid). It’s unwarranted to give him credit for the supreme court, as they fell in his lap, but it’s consistent of the 4 years, a ruthless in terms of appointing Republican justices and supreme court seats. That will last long after Trump is out of the office.

And that’s it, the only major positives in 4 years

The negatives, however, to put it simply, has been a joke. A complete tarnish of race relations, the Muslim immigration ban, the construction of an unfinished and pointless border wall with Mexico, concentration camps of the Mexican border, where families are separated. The seemingly purposeful petrol on the fire actions and comments regarding race relations, with regards to Charlottesville, Portland, and the Black Lives Matter protests in general. The removal of DACA (Deferred Action for Childhood Arrivals) on day one. Placing the lives of countless American kids at risk of deportation. The disregard of American allies, the withdraw of NATO, WHO, the Iran nuclear deal, and the Paris Agreement. An unsuccessful trade war with China (costing American farmers), total disregard for climate change. A muddled history with Russia, leading to Trump’s impeachment by the House of Representatives, and everything regarding the disgusting and disgraceful handling of the Covid-19 Pandemic.

In the Blue corner,

Former Vice-President, Joe Biden. A career politician who became a senator in 1973, up until he was appointed Barack Obama’s running mate in the 2008 Election. In the 43 years, his been an elected official, Biden has carved out a reputation as being a deal maker politician, one that can close party divides to create, negotiate and pass laws and deals to help the American people. He did just that, convincing a republican owned senate to pass Obama’s stimulus bill that helped ease the pressure of the 2008 financial crisis was having on the lower and working classes. His reputation of being able to connect and work successfully with both parties has meant that Biden’s eye has long since been set on the presidency. This is his third attempt, first in 1987, and then again in 2008, resulting in his pick as VP. Biden is without his shortfalls, as is anybody or politician. He endorsed the passing of the 1994 Crime bill that saw the policies that furthered the exploitation of minorities through law enforcement. A bill he would later say was a grave mistake. He voted for George W. Bush’s Patriot act, as well as the war in Iraq. A war he would later be critical of its handling, and a war he would lose his son to.

In his third and final campaign to be president of the United States, he’s faced strong opposition, not only by Trump and the Republican party but within his own party. His path to winning the Democratic nomination, in the end, it seemed an easy affair. But in the months leading up to the primary elections. Biden faced significant opposition from the likes of Bernie Sanders, Elizabeth Warren, and Kamala Harris. All of which targeted Biden as the moderate candidate, that the response to a far-right president in Trump, was to nominate a progressive candidate. Harris was first to fall, then Warren. Which left Sanders and Biden as the remaining two. The primaries opted in favour of Biden, with his strong base of Minority and working-class voters winning him the nomination.

In Biden’s election campaign, he nominated his former opponent Kamala Harris as his running mate. Harris brought the progressive vote which Biden was lacking as the moderate and Establishment pick. Biden’s policy has since then shifted to include more policies that Harris and Sanders were in favour of. Most notably the including of many policies found in Alexandria Ocasio-Cortez’s ‘Green New Deal’ environment plan, into Biden’s own pledge for handling the Environment. His time on the campaign trail has been spent uniting the democratic party, as well as targeting key swing states that were won by Trump in 2016

Trump’s election campaign has been turbulent, with Trump overseeing the response to the pandemic. Trump (In truth) has been on the campaign trail since 2016, with the continuing his rallies. Since Biden won the party nomination, The Trump campaign has been on red alert, trying everything bar the kitchen sink. With a stream of lies regarding Biden as a mentally and physically ill, the damage control lies about the mail-in voting system, that the Trump campaign has stated numerously leads to voter fraud. Funny as Trump and his press officer have voted by mail on numerous occasions. The lies about the voting numbers are nothing new, the Trump’s lackeys peddled news about millions of illegal immigrants voting in 2016, this unsurprising news,(and ironically) fake.

In the two face-to-face debates, it’s hard not to see Biden, as the overall winner. The first which saw an unhinged (more unhinged than usual I mean) Trump, throwing, shouting, and interrupting with as many lies as possible (targeting Biden’s record, his family and his dead son), to see what stuck, not much in reality. The second debate was a clear success for Biden, a calm and prepared showing, that saw Biden nail Trump on issues such as his failings in the economy for the working, lower and middle classes, Trump’s refusal to publish his tax returns, as well as Biden having a clear vision for his healthcare plan, adding a public option to Obamacare, that would affect tens of millions.

With the early signs of a significant rise in voter turnout, Biden seemingly uniting his base of the democratic party as well as seemingly (based on polls) flipping key swing states. It seems very unlikely that we’ll see a repeat of 2016. But as was in 2016, Trump is the outsider candidate, Clinton won the popular vote by almost 3,000,000 votes, so it could just as easily be the upset the shock that it was in 2016. . But with Biden seemingly about to flip the swing states, as well as states that haven’t been won by democrats since 1992. It seems as if it is lining up for this being third time lucky for Biden. That’s if we don’t see any malarkey on November 3rd and the potential weeks following the counting of in-person and mail-in votes.

It’s the incredible clique line that gets thrown out ever four years, the “This is the most important US election in our lifetime,” and yes, as that may be true, the clique shouldn’t undercut the fact the American (from across the ripple induced pond) seems that the melting pot is almost at boiling point. And now more than ever, the steady, cool, and experienced hand of Joe Biden. Could be a candidate that can not only right the wrongs of the last four years, but build alliances and a future that seeks to not only protect the jobs for the working class, safety for the ever-increasing minority population. But impact the world on a global stage, to lead the world as the innovators that they once prided themselves on, and lead the world through the ever-closer threat of Global warming.

It’s less than a week away, millions have already cast their vote. I’ve got my fingers crossed for whom I want to win, do you?