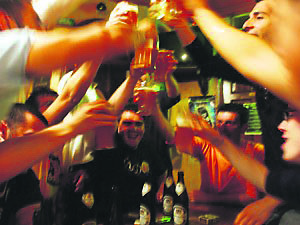 Before anyone thinks this is a rant towards people who drink excessively, it’s not at all. If it was, I’d be the world’s biggest hypocrite and if I’m perfectly honest I have some amazing and hilarious memories from those times.

I’ve only stopped drinking for a week because I simply couldn’t afford to but I had no idea how much I would realise, I didn’t need to depend on it to make connections. It’s just such a shame that it has taken this long to realise that.

I used to have to drink when I went out because otherwise I’d feel awkward. Earlier this semester I could easily get through about 70cl or more of vodka a week.

I’d go out every night with my friends and when I think about it now, the drinking was due to insecurities. I get shy meeting new people and with alcohol in my system I was this confident person that was so completely different from my normal self. I didn’t mind meeting new people, I loved dancing no matter who was watching and I didn’t care what anyone thought about me.

When people would meet me when I was drunk they’d say “You’re so fun to be around” and “You’re hilarious”.  When I’d wake up the next day I wouldn’t know what to say to those same people, would they still like me even though I was completely different sober? Am I just boring or too shy now?

These thoughts used to race around in my head every day from pretty much the start of college in first year. I was getting through the year and making friends along the way but I always had this anxiety that they only really preferred the drunk me instead of the normal me.

Looking at the bigger picture, I realise that drinking excessively did nothing but hinder my life. It would make my psoriasis flare up which made me self-conscious about my body. It made me gain weight because I would be tempted to get takeaway as it was the easier option. I wouldn’t go to the gym because in fairness who likes going to the gym with a killer hangover?

I wouldn’t be able to concentrate in class at all because the hangovers I had on a daily basis were colossal and only got worse as the week progressed. It was just doing nothing but making me a slob and so unmotivated that it was impossible to achieve anything.

This year, I’m living with my best friends from college and it has been nothing but a confidence boost being around people who completely understand and support you. I think this has affected me in such a positive way because when I wasn’t drinking this week, despite them drinking, they didn’t complain that I wasn’t and were completely supportive of my stance.

In fact when I was dancing with my friends I was asked “Holly are you drinking?” to which I replied, “No, I haven’t had anything.” And they were shocked. “You’re really fun sober,” was what I heard this week and it made me so happy.

It made me realise the only way I was being ‘fun’ was accepting who I am. I was completely embracing the person that I was and that’s the happy, quirky and energetic person I can be.

So the drink was helping me embrace who I was, I just needed to take the time to learn how to do that without it and now I’m so assured of the person I am. Sure, I might enjoy the odd drink when I’m out with my friends but I don’t think I really need that much. After all, I feel great when I wake up in the morning and much more motivated.

*The content in relation to alcohol use in this article relates to UL’s Alcohol and Drugs Awareness Week and involves the opinion of a UL student which is solely intended to illustrate an opinion and promote discussion. Nothing in this article should in any form be taken as an endorsement of any illegal or unhealthy activity involving alcohol.