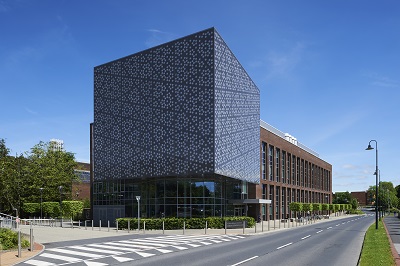 Opening the conference, UL president, Desmond Fitzgerald said:
“Today is a celebration, a day when we celebrate the achievements of women; we’ve come a long way from when we started.”

Speakers at the event included: Ailbhe and Izzy Keane, co-founders of Izzy Wheels, a company who design stylish wheel covers for wheelchairs, Declan Coyle, author of the Green Platform, and the event was chaired by Catherine Duffy, CEO of Northern Trust Fiduciary Services Ireland Ltd.

Vicky Phelan told the audience that before last year she initially did not experience or see any inequality in being a woman.

“But in the last year I’ve seen the inequalities that do exist, not only in our health care system but across society” she continued.

The activist and mother explained that prior to last year, she felt she had not found her vocation in life.

“I feel like what I’m doing now is just so fulfilling, I’ve just found what I want to do and that is to improve the lives of others through advocacy.”

With regards to her €2.5m settlement against the HSE and the US laboratory that missed her cervical cancer diagnosis, she said that “I wasn’t going to let them win.”

Even though she had months to live at the time, she refused to be silent, wanting what was eight other women at the time to know they may have also received false smear test results.

The activist was presented with a gold sovereign coin by Andrew Keating, Executive Director and Group Financial Officer of Bank of Ireland.

Mr. Keating explained that the sovereigns were initially presented to women in Bank of Ireland when they left work due to the Marriage Bar, which was lifted in 1973 after Ireland joined the European Union.

The sovereign is now presented to leaders and those who enhance equality and diversity in society, according to the Executive Director.

Last year bank of Ireland presented the 30% Club a sovereign, an initiative with the intent of achieving a better gender balance in business.

“In a generation, we went from banning women working to electing a married female president,” Mr. Keating said.

The theme for this year’s International Women’s Day was #BetterTheBalance, with the goal to have a better gender balance in all fields.