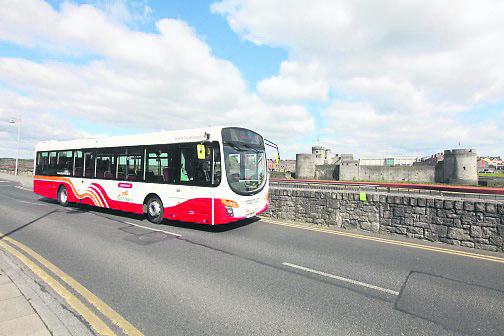 There has been a 31% increase in the fare for the 304 bus route which runs from the University of Limerick (UL) to the city centre in the past five years.

According to the timetable set by Bus Éireann buses are supposed to arrive periodically every fifteen minutes, however in a number of circumstances this is not the case in practice.

On one date last month one student observed at least a forty five minute delay in buses to the university despite other services arriving within that time.

He told An Focal: “It’s unacceptable that the fares have gone up and the service seems to have just gotten worse. I had arranged to meet someone in Limerick city but by the time the bus got to UL it was too late to meet the person despite them travelling into the city to meet me”

“I think Bus Éireann needs to either reduce the rates again or improve the service significantly,” he added.

It was noted that more often than not this service is unpredictable and as a whole unreliable.

Ms O’Donnell said: “The majority of students have to suffer a forty five minute delay instead of  fifteen minutes. This stops students going into the city. In the last four years fares have risen each year and services haven’t improved.

“This has had a real impact on students; with them coming to lectures late and being late for buses home on Fridays.”

A second private service has been acquired by Dublin Coach as of December 2015, catering for the same route meaning Bus Éireann is now competing with this private firm. The 307 and the 308 also run the same route.

Students attending the college for a number of years have noted a ten cent increase per annum and no observable improvement in the service. A number of students have observed some occasions where it appears too many passengers were permitted on the bus at a particular time.

Other students have observed instances where buses are overcrowded upon arrival. In conversation with An Focal one student said: “The drivers often take on way too many passengers. There’s sometimes as many standing as there is sitting”.

A spokesperson from Bus Éireann confirmed that the increase in bus fares had been approved by the Department of Transport and the National Transport Authority (NTA).

She also explained the benefits of using Leap Cards which she said have been “introduced onto all Limerick City Services in early 2015” and that holders of Leap Cards can avail of a discount of 24% compared with the current cash single fare.

According to the 304 Bus Éireann timetable, buses are supposed to arrive every fifteen minutes between the hours of 7am and 8pm, and “30 minutes thereafter until 11.30pm on weekdays.”

When An Focal enquired into the frequent delay in the 304 bus service, the spokesperson explained that congestion was the biggest impact on the reliability of buses. It was stated that additional resources were deployed “where possible”. The NTA are reported to be reviewing this route in conjunction with Bus Éireann.

When asked about the issue of overcrowding and whether Bus Éireann has a policy in relation to the number of passengers permitted on each bus, the spokesperson explained that “overcrowding is not permitted by Bus Éireann”.

She said: “Each city bus has its own certified maximum seating and standing capacity at which they can operate.”

According to the spokesperson, the “standard capacity for city buses is 86 passengers and the capacity consists of 45 seated and 41 standing passengers”.

As it stands, no major improvements have been announced by the NTA or Bus Éireann in relation to the current standard of service.

Information in relation to Leap Cards can be found on www.leapcard.ie and www.studentleapcard.ie respectively.

Not registering to Vote for GE16?