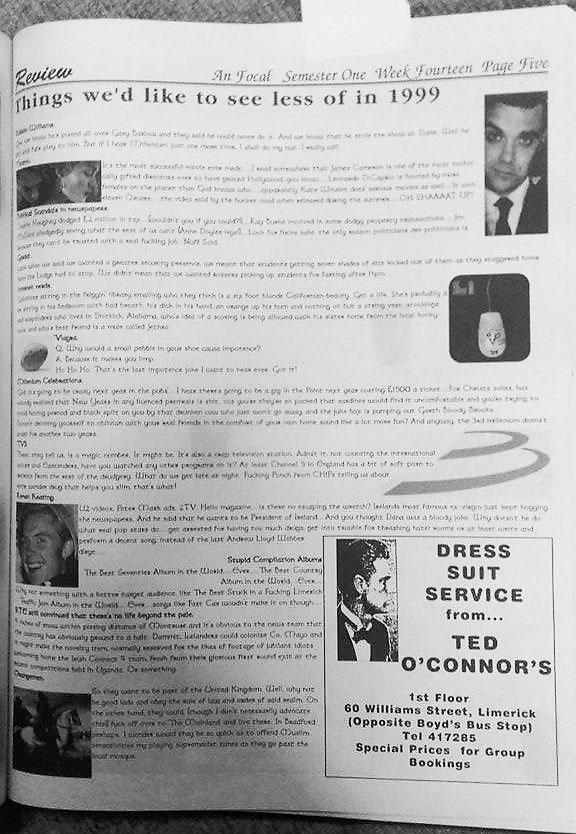 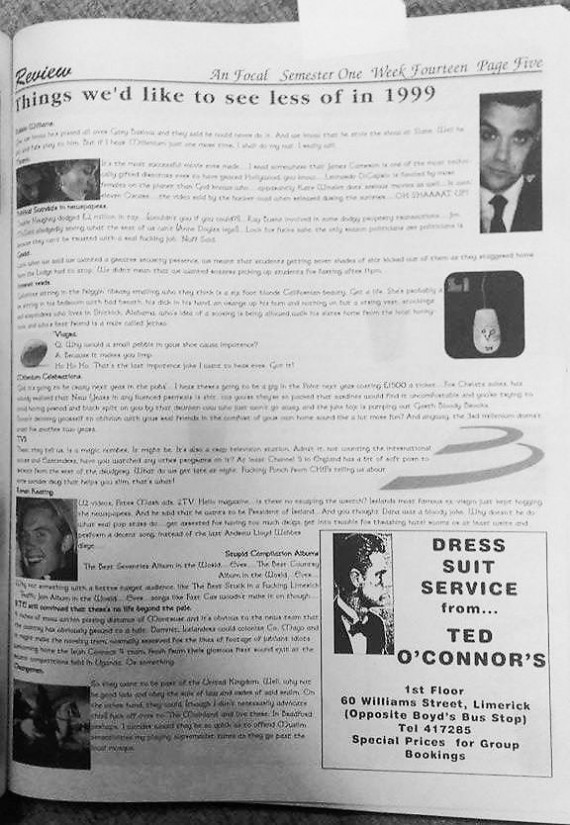 In this issue’s look through the archives we go waaaaay back to 1999, when I was just four years old. The article is titled “Things we’d like to see less of in 1999” and contains twelve different things, be it a person, topic or a thing.  I’m going to single out five of these things and see if any of the things that were seen to be relevant in 1999 are at all a topic of conversation seventeen years later in 2016.

The film was released in 1997 to wide critical acclaim. A widely female audience were destroyed again and again when a floppy haired Leonardo DiCaprio froze to death while Rose clung uselessly to a wooden door. It seems that two years later that a large majority were sick of hearing the lines “Draw me like one of your French girls”. Well I hate to break it to you but Titanic is still as relevant now as it was back then. In February 2016 it’s award season and every time Kate Winslet and Leo cross paths it prompts a stream of articles. Kate Winslet was recently interviewed on Jimmy Kimmel Live and she admitted that the broken door on which Rose sought refuge in the film could have easily have fit Jack. Thus saving his life. Duh, something we all saw from the beginning. Still doesn’t bring him back though does it?

The name itself suggests something positive. Guardians of the peace. In 1999 they were a source of annoyance, stating that students were getting “seven shades of sh*t kicked out of them as they staggered home from The Lodge”. However in 2016 I feel the Gardai are getting a lot of abuse. I’ve read lots of stories were Gardai have been injured with glass bottles, stones and more recently a story where a Garda was dragged along the road by a female motorist at a checkpoint. Scary stuff. Most of the time I find that the Gardai or “the guards” as we call them are quite agreeable unless you really f*ck up. Personally I think if we don’t wreck the place there’s no reason why you have to interact with the Gardai at all. It’s really quite simple.

Back in 1999 the internet was a relatively new thing, not everyone had it and it was slower than a tortoise. Spending time on the internet playing games was seen as a nerdy thing to do. In 2016 nearly everyone has access to it. You still have people doing weird things online, whether it’s talking to foreigners on Omegle, spending hours looking at stupid memes or watching a baby eating a lemon for the first time. There are really endless possibilities on the internet. However it’s not just internet nerds that use it. You get all sorts of weirdos on it, seriously.

Who even remembers where they were or what they were doing when the millennium occurred? I certainly don’t. I was five years old and I don’t think I even knew what was going on. But when you think of it, it means you lived through both the 20th and 21st century. Which is pretty cool when you think about it. What is special about the year 2016? Not much. It’s a leap year, which means the Olympics will be occurring later this year. It’s also the Year of the Monkey according to the Chinese zodiac. Two pieces of information that don’t really mean that much. In fairness, it’s been sixteen years since the year 2000 so it’s not really that special any more.

Back in 1999 they were also causing a ruckus every time they held their marches. For my Leaving Cert I had to study a Heaney poem and was given a background to the sort of activity that went on during the marches. In Belfast, to protest against the Orangemen marching with their British flags, the Nationalists used to bang their bin lids in protest. A quote said “the dust-bins high and silent”. In 2016 Orange Order parades still occur and people protest back. Will the struggle between those wanting to be part of the United Kingdom and those who would rather die than be called British ever end? I can’t imagine a life where that exists. But who knows?