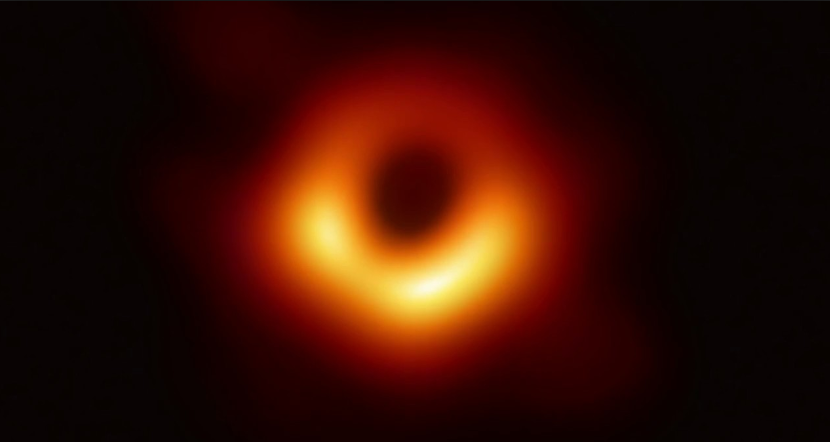 That is the first black hole ever to be pictured. – Well technically; it’s shadow.

It is in the centre of the Messier 87 galaxy, which is 53 million light years from our Blue Planet.

What we see in the is a black hole larger than the size of our entire solar system, and it’s very heavy.

So heavy in fact that even photons of light, which are massless, are bent and distorted by its huge gravity. The ring of light around the shadow are these light photons that go into orbit around the black hole.

This photo is so important because, for years, physicists and astronomers have been developing mathematical models and artists’ impressions to try and visualize a black hole. The best attempt of this was in Christopher Nolan’s 2014 film Interstellar.

This picture came 104 years after the one and only Albert Einstein predicted the existence of black holes in our Universe in his famous Theory of Relativity, and 48 years after their existence was confirmed by experiment.

Over the years, black holes have been a massive part of science fiction and science fact.

In a recent interview with the Deputy Head of Physics Department here in UL, Dr. Ian Clancy, I asked why physicists and astronomers are so obsessed with black holes.

He made the point that both physicists and the public are “fascinated” by the “strange and seemingly impossible” black holes. From a research point of view, they are very extreme, in fact, the most extreme situations, and this lets us test our theories.

The photo enables theories like Einstein’s General Relativity to be tested on the most extreme scale. It passed with flying colours, again solidifying the reputation of the century-old theory.

The recently late Stephen Hawking is one of the most widely known physicists to study black holes.

He came up with many theories and settled many questions surrounding the nature of black holes.

One of his most famous theories was Hawking Radiation, which utilizes quantum mechanics and thermodynamics to show that black holes do actually emit radiation and therefore can shrink and die.

This has not been observed, yet, but the theory is widely accepted by physicists due to Hawking rigorously proving his theorem.

The observation of Hawking Radiation might be the next big thing to happen to black hole science, and it certainly would be significant.

Hawking, who died on Pi Day (March 14) last year, would have been very excited to finally see this image.

This colossal feat was made possible by eight telescopes spread across the globe and some impressive technology to use the data from each to create a virtual telescope the size of the Earth.

A group of over 200 scientists known as the EHT (Event Horizon Telescope) Collaboration were the brains behind the mammoth experiment.

The team are currently imaging Sagittarius A*, the super massive black hole in the centre of the Milky Way and will be imaging many more in the years to come. Dr. Clancy stated that this will push the collaboration to “look at the same black holes but with much higher resolution.”

He also pointed out that massive announcements like this “encourages governments and groups of governments to fund these types of projects.”