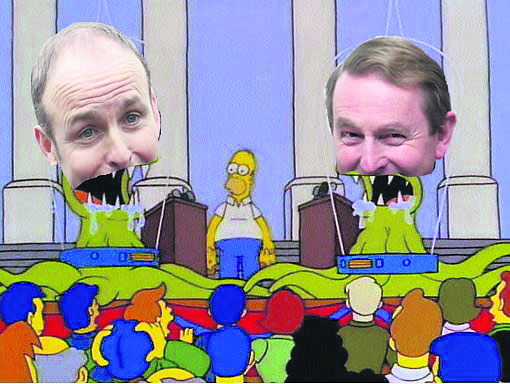 “Very well. No abortions for anyone.”

“Abortions for some, miniature American flags for others.”

And that’s how elections go. You make promises, most of which you can either never keep to, or you must compromise on to go into power. General Election 2016 saw this reality played out for dozens of TDs and political hopefuls as their previous promises were dropped in favour of power and now the electorate demanded their blood.

While the promise of abortions were not enough to save one party from almost certain demise, others faced the abortion of their own parties on Saturday and Sunday of the election count.

Lucinda Creighton, Renua Ireland leader was the fatal casualty of GE16, as the Green were five years ago. As the hours ticked by, each of the party’s 26 candidates were wiped from the political map, with Creighton herself hitting the road before the last of her election hopefuls.

Late on Sunday night, one journalist commented on Twitter: “So Renua was a crisis that needed to be terminated #RepealtheCreight”.

This was obviously a play on the circumstances behind the creation of the grouping which eventually became Renua. Dismissed from Fine Gael for opposing the Protection of Life During Pregnancy Act 2013, which gave effect to the constitutional right to abortion in certain circumstances, Lucinda lead a number of her fellow TDs and Senators to the Opposition benches to wait out their sentences until 2016.

Creighton took a risk though and formed her new party, a party which would take no stance on the issue of abortion, yet attracted many anti-abortion activists and voters. Perhaps it was the proposed flat-tax, the mandatory prison sentences or the prospect of holding parents responsible for their wayward offspring?

Whatever the reason, Creighton’s party was all but aborted by the Irish electorate and have now left the building with 2.2 percent of vote. State funding has now been dropped on the party, so with another three years to wait for the local elections, there could be a rebirth and revival.

A kingdom with two kings

Despite Renua’s losing streak, two victors did emerge in the mess and confusion that was General Election 2016. Their names: Michael Healy-Rae and Danny Healy-Rae of the now Healy-Rae dynasty.

Topping the poll on count 1 with over 20,000 votes (one and a half times the quota) was Michael, the returning TD renowned for his traditional flat-cap who stepped into the helm for his now deceased father. However the shock was that on count 2 his brother Danny, now a first time TD, was also elected and the pair will now represent Kerry in what could be the highest form of parish-pump politics to be seen this side of the 21st century.

If you were in the business of selling miniature flags, now would be the time to invest in the green and yellow flags of the Kingdom.

But has anything really changed?

The two and half party system is dead, as declared by so many after the General Election results began to roll in. But now we’re facing into a double hit of “unknown territory” and “the same old politics”.

Yes, the Labour Party is returning with 7 TDs but the party can hardly be considered dead and buried. The Green Party who went in three general elections from no TDs, to six and a government party, back to none and back up now again to two.

As for the two big hitters of Irish politics, Fine Gael and Fianna Fáil, they may not have come out of the election with a clear and outright winner as they have so often in the past, but they remain the main players in the game. Between them, the pair continue to hold the keys to power.

A scene from the Simpsons (back when it was good, even enjoyable to watch) perfectly matches the Irish electorate’s view of the political system in this country.

“It’s a two party system, you have to vote for one of us,” declares one alien after impersonating one of the US presidential candidates.

A lone voice from the audience replies: “I believe I’ll vote for a third party candidate.”

“Go ahead, throw your vote away,” is the response given.

Now, we know how effective smaller parties and independent TDs can be, especially from the performances in the 31st Dáil from 2011 to this January. However in forming policy and legislation, these tasks remain the firm hands of Fine Gael and Fianna Fáil.

Even if either of the two big parties decide to form a rainbow coalition to avoid going into power with each other, there will remain junior partners who will have to compromise on their policies more and who will have less of a voice in policy creation and implementation.

Power rests with the civil war parties still, despite talk of political upheaval and earthquakes. The other sure thing about Irish general elections, which is perfectly exemplified in this year’s election, is that the smaller groups and parties, the babies in the relationship are chewed up and spit out whenever they do attempt to share the keys of the kingdom. Just ask Joan and Lucinda.