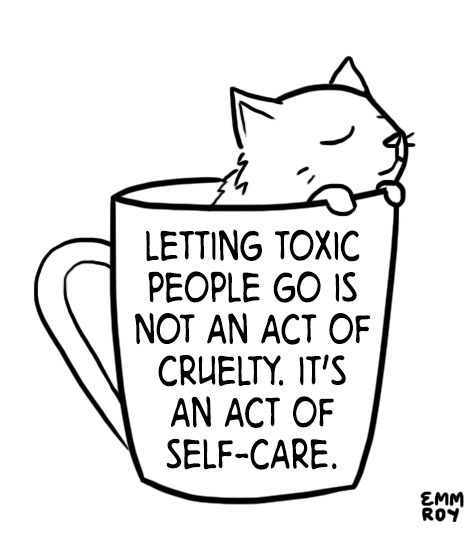 I was inspired by Bressie’s speech on mental health which was held on April 5th this week. A key part of being happy according to Bressie himself was to “limit toxic people and environments”. Which got me thinking of the one word toxic. What it entails and whether I knew or had toxic people in my life. No matter where you go in the world you will come across people who genuinely seem not to care what other people think or care about their feelings. Which always perplexes me because I do try to regard the feelings of people around me. I don’t set out with malicious intent, no matter what the situation.

In the most brilliantly thought out of films and television shows you find sadistic characters that cause other characters pain and seem to relish the idea or even get a kick out of it. Which is interesting because you meet these people in real life all of the time. Talking to these people or even reasoning with them seems to be impossible. Honestly, you’ll just get a bad taste in your mouth.

I am not talking about any particular person when I talk about this, but there’s always that one person in an environment that HAS to kill someone’s happiness no matter what. Whether it’s you causing the negativity or not. I am sure everyone has been in a situation where someone who has a differing opinion decides to take it upon themselves to prove that the other person’s opinion is wrong. Take from example; music taste. You get those who like rock music absolutely slating others for liking that of, say, One Direction. I’m using this as an example as it’s what I see most frequently on social media such as Twitter.

What you’ll see is those who listen to rock tweeting meme pictures slagging One Direction and thus their fans. It makes me so angry. I am not a One Direction fan, but I cannot understand why someone else’s music taste would upset you. If you don’t like it, why bother telling the person that DOES like it that YOU don’t? Why? I don’t understand why you’d bother. It just creates unnecessary negativity. Why try destroy someone else’s enjoyment? It will continue to confuse me as long as it keeps happening. If it doesn’t affect you in the slightest, WHY bother getting involved. Stick to the music you like and keep your mean intentions to yourself. I repeat, why bother?

Then you’ll have people who like to “stir s**t”, who join your group on a night out or walk into a room full of people and whether by accident or on purpose cause trouble. I am always curious about these people. Is it entertaining for them to watch a situation form into something from a tiny ripple to a full blown storm? Or to watch a group of people descend into chaos. There’s always that one person who creates bad feeling wherever they go. I hope to GOD I am not one of those people because I always set out with the best of intention. And in fairness, most people have nothing but positive intention. As Bressie said “limit toxic people”. Don’t let them near you, there’s more to life than tolerating people that make you feel. It’s just not worth it.