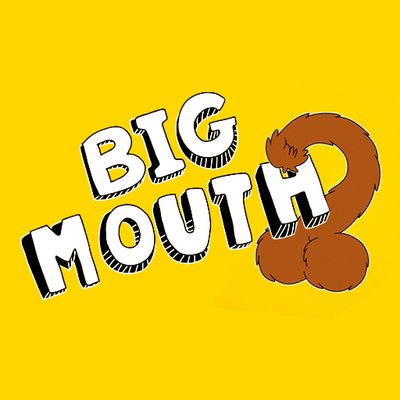 Big Mouth returns with horrific hilarity in a season that builds and improves on the strengths of the first.

After an opening season that many saw as a fresh and unique take on the perils of puberty, Big Mouth returns for a second run that improves on the first in almost every way. The plot is clearly a greater focus for the writers this time around and this season certainly doesn’t lack for it. In just ten episodes, we’re treated to a variety of character-specific arcs such as main character Nick dealing with a teenage crush that is likely to go unrequited, Jessi acting out in the midst of her parents’ divorce and Andrew’s struggle to deal with two other-worldly entities controlling his emotions from inside his head.

Even the side characters are given plenty to do, with new character Gina finding herself treated like a completely different person after her body develops over the summer and Missy feeling under siege by her negative body image. Not only do the writers manage to find the time to fit all of this in around the endless dick jokes, but all of these plot points manage to perfectly come to a head in episodes eight and nine that essentially function as the season finale, with episode ten left as an epilogue of sorts.

In fact, storytelling has improved across the board with almost every named character ending up in a different place from where they begin in the first episode, which deals with Jay and Jessi’s ill-advised plan to run away to Mexico together. Once that plot point is quickly resolved, the show can start to sick its teeth into the main theme of the season: shame. This takes the form of the season’s best new addition and primary antagonist, the Shame Wizard, voiced to demented perfection by David Thewlis, who is clearly having a ball with the role. Big Mouth’s greatest strength has always been its ability to combine the absurd with the relatable when it comes to the horrors of adolescence and the Shame Wizard is the embodiment of this. Much like the Hormone Monsters, he can only be seen by his wards but whereas they are supportive and caring, he delights in verbalising every shameful thought and insecurity rattling around in the teenager’s heads, swooping through scenes with the malice of a cockney Lord Voldemort.

Big Mouth wastes little time in addressing the flaws of its first season, namely just how superfluous and distracting the characters of Duke Ellington and Coach Steve felt. Duke has been relegated to just a handful of appearances, which is probably the best move considering he remains the most noticeably odd addition to a show featuring pet penises and sentient pillows. Coach Steve, on the other hand, is far better served, going through his own story of sexual awakening that mirrors that of his students. He feels like a member of the gang this time around, rather than a barely-connected oddball who would show up just to get a couple of jokes in before disappearing again. This time around, the only obvious flaws are a few side characters and jokes that don’t quite land as they should, like Nick’s Hormone Monster Rick, who is very reminiscent of season one Coach Steve.

However, Big Mouth is still a comedy show and it remains every bit as filthy as fans would expect. The way it approaches its crudeness with a combination of cleverness and childishness harkens back to the early years of shows like South Park and Family Guy, such as when the Shame Wizard puts Andrew on trial for his many perversions. We’re treated to a hilarious list of the many abstract things he has recently pleasured himself to, only for the assembled gallery of Shame Wizards (the trial takes place in his head) to morph into a mob of Andrews, each loudly proclaiming him guilty. Scenes like this are the show’s trademark, managing to get both a laugh and a nod of understanding from the viewer at the same time. With that said, not every joke is a winner and too many of them feature a wacky side character directly addressing the audience with a joke that falls flat. Still, Big Mouth has lost none of its bite and holds nothing back from the viewer, so first-time watchers should expect gratuitous nudity and swearing from a show that is simultaneously one of the most mature and juvenile on television.
One of the most rewarding aspects of the show is how it continues the good work of season one and builds upon it, fleshing out the world and giving events a sense of natural progression. The characters took their first, nervous steps in their pubescent journey last season, so it just makes good sense that as they now delve further into that world, emotions like shame and insecurity would start to weave their way into proceedings. Another example is Jessi’s parents’ divorce storyline, which feels like the logical next step considering how unhappy we saw them to be last season.

Despite the endless moments of humiliation that the characters suffer that will leave you cringing in sympathy, this is a surprisingly optimistic show. With every pubescent misfortune portrayed onscreen, there’s the unspoken acknowledgement that everyone feels this way sometimes and that friendship will see you through the darkest of circumstances. Much like American Vandal, this is a show that manages to get into the heads of teenagers in a way that’s funny and all-too relatable and for that, it deserves nothing but praise.
8/10

UL’s Outfits of the Week