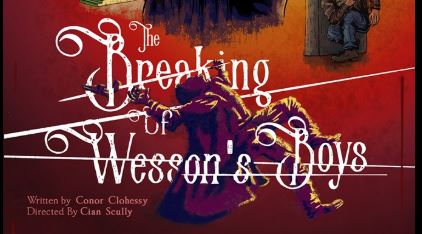 The UL Drama Society and Film Society finally witnessed the fruits of their labors on Tuesday evening at the premiere of their new short film, The Breaking of Wesson’s Boys.

The film was shown in the University Concert Hall in front of a sold-out audience, which included the members of the cast and crew.

The Breaking of Wesson’s Boys is set in the old west, and it surrounds the story of five young men who were taken under the wing of Pete Wesson (played by Kevin Kennedy) when they were just kids in an orphanage.

But when the band of misfits decides to rob a bank, Pete leaves them to fend for themselves, and the events that ensue are nothing short of dramatic.

Acting as the story’s narrator, Pete describes each of the characters with the affection of a father figure, giving the audience some insight into the personalities of Mason Harvey (played by Conor Clohessy), Charlie Rose (played by Darragh Dowling), Dean Rose (played by Ollie Parry), Tom Day (played by Hugh Greaney) and Harry Hughes (played by Luke Fitzgerald).

The audience discovers that although the boys are all unique in what they bring to the team, they all experienced the same trauma as children in the frightening Catholic orphanage.

Before carrying out their crime, the band of brothers spend the day carousing with prostitutes in a scene laced with clever humor.

Playwright Conor Clohessy, speaking to An Focal, said his work is inspired by the likes of Tarantino and McDonagh, and it’s evident the student of the stage and screen has carved out his own creative voice.

After this, they attempt to enact their bank heist scheme in a fast-paced action sequence, which ends in a classic “shoot-em-up” scene in a graveyard.

The movie concludes with the unfortunate death of one of the members, and he is carried away by his grieving brothers.

All throughout the movie, the film and drama societies showed their cinematography chops, skillfully using camera angles, special effects, and lighting to convey the story well.

The six young actors who played the main characters managed to pull off some convincing southern accents, and although they were accustomed to acting for the stage, they seemed just as comfortable acting in front of a camera.

The whip-smart script kept the audience on their toes and brought out even better performances in the actors.

“It’s hard to direct a western in Limerick,” Director Cian Scully joked before the film began, “We don’t have much sand.”

Despite the lack of desert terrain, the film and drama societies’ first movie production was a hit, and the audience gave the film an enthusiastic standing ovation.

The two societies clearly benefit positively from each other, and hopefully we’ll be seeing more collaborations from them in the future.