Suffering some FOMO because you’re not at County Colours? Fear not, because tonight is only the start, and it’s only going to get better from here!

In the courtyard tomorrow, be prepared to bump into Red Bull, Spin SouthWest, Dinky Donuts as well as casting your eye on the Hanging Bar Challenge, from 1pm the Stables will be buzzing with music from DJ Paudie, followed closely by both the Shave or Dye and Leg Wax which will both be commencing at 1.30pm, pop down and don’t be afraid to contribute your bit to Charity Week! Games with DJ Ber will follow DJ Paudie.

Bongo Steve will have his bongos out in the Library (the nightclub, not the Glucksman!) from 8 pm, tickets are €5! Other than that, the Scholars is gearing up for a night of trivia with a table quiz also commencing from 8 pm- so take your pick! Teams of 4 at €2.50 per person!

The SU Courtyard is where it’s at Tuesday evening with The Riptide Movement making their debut at the University of Limerick, with support from Daithí, Hammy & the Pilgrim, and Dan Jackson tickets are €10 but of course, access is granted with a banter band also. Gates are to open at 8 pm- hopefully, the weather will be on our side!

On Wednesday evening of Charity Week 2018, we’re banishing the hump day slump with Leeds DJ Tom Zanetti & K.O Kane, who will be supported by UL student, Kash as well as Music Soc DJs and the DJs of Afterlife. This event will also be residing in the SU Courtyard at €10 a ticket!

DIE is back at Dolans Warehouse for the best Thursday of the month this Charity Week, at €7 entrance, tickets can be both bought at the SU or on the door, dependant on ticket sales.

TGIF at the Stables ends the week-long of Charitable events for a further €5 in the Stables from 9 pm where you can ring out UL Charity Week in style.

Tickets for all events can be purchased at the UL Student Union throughout the week, as well as Banter Bands for €25 which will allow the wearer entrance to Bongo Steve, the Riptide Movement, Tom Zanetti, and TGIF.

This year the University of Limerick have chosen the amazing charities that are; Rape Crisis Midwest, Clare’s Wish Foundation, Limerick Suicide Watch, and the Peter McVerry Trust. 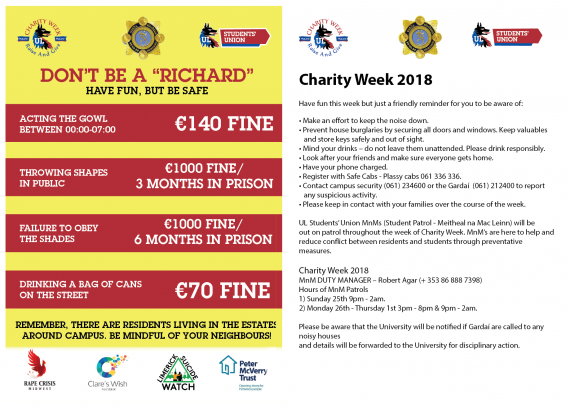