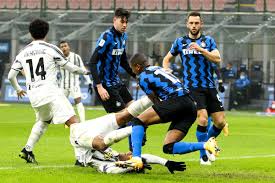 Serie A Champions Juventus have sealed their place in the final of the Coppa Italia against Inter Milan after a goalless draw in Turin.

The Old Lady won after an authentically Italian defensive showcase that prevented Inter’s men breaking down the Juve Wall who needed two goals to overturn the first-leg defeat.

Andrea Pirlo’s men will now face either Atalanta or last year’s winner Napoli in the final as Pirlo seeks to claim his second piece of silverware after winning the Supercoppa Italiana in January.

Speaking after the match, the former Juventus and Milan midfielder praised his defence saying that: “I’m lucky to have four excellent centre-backs and they’re all doing well. We played well today because Inter hardly had any shots on goal. We had the best chances and Handanovic was the best player on the pitch.”

Although the Juventus defence held up till the end, Antonio Conte’s men will feel more like the semi-final was a game of missed opportunities rather than a shutout.

The Milan side was aggressive in the first half, pressing high and pinning back Juventus which resulted in nine shots on Buffon’s goal in the half.

Argentine Attacker Martinez would be particularly critical of himself as he failed to convert several chances to give his side the first goal that they desperately needed to claw back the deficit.

Juventus were able to impose their game more effectively in early in the second half with Kuluveski, Cuadrado, McKennie and Ronaldo running at the Inter backline cause them distress.

Slovenian Goalkeeper Handanovic had to make several saves to keep Inter in the tie including two superb low reflex efforts against Ronaldo.

Frustration set in as the second half boiled over with substitutions Sensi, Kolarov and Perisic unable to change Inter’s fate, with bookings for Perisic and Brozovic being emblematic of their side’s fortunes.

“We tried to turn things around tonight but weren’t able to. We need to learn from our mistakes and bounce back,” Antonio Conte said of his side and chalked his side performance to failure to capitalise over two legs.

The former Italian National team coach who took over the Milan side in May 2019 has overseen massive investment in the squad bringing in stars like Lukaku, Hakimi and Sanchez.

However, Conte has now failed to make any major progress in cup competitions and is still shy of claiming the topflight trophy.

Antonio Conte will now face increased pressure as the league will be his only chance to win silverware this year as Inter seek to end a 10-year trophy drought.

How The Pandemic Changed My Relationship with Fashion