Ellen Gough spoke to outgoing Communties Officer, Chelsea Joyce about how being the first officer for Communities faired out this year. 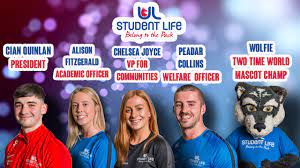 Chelsea Joyce certainly didn’t anticipate a year like this as the first ever Communities Officer.

“To be honest, my manifesto went out the window with Covid,” she said.

The role of Communities Officer was created in 2020, after a quality review into Student Life identified a need for a student officer to specifically cater to minority students in UL.

Much of the work had previously been the responsibility of the Welfare student officer.

According to Chelsea: “The Welfare Officer had to do an awful lot of what I’m doing now, and their own responsibilities so they were just so drained, they were dealing with an awful lot.”

Chelsea was no stranger to the business of Student Life when she was elected in April 2020.

For her work placement in second year, she worked as the Events Coordinator.

She also worked part-time in the reception during final year of her degree, History with Sociology and Economics.

It was these experiences that cemented her interest in running for a student officer position.

However, she was unsure if any of the roles available at the time would suit her.

“President wasn’t for me, Academic was NOT for me…I was really unsure about the Welfare position. For me, I can get emotionally attached, and I didn’t think I’d be able to leave student cases at the door,” she explained.

Working in Student Life already meant she was one of the first people to hear about the new Communities role, and something clicked right away.

“I was like ‘I could do that! I could definitely do that and put my stamp on it’, And that was it then for me.”

Being the first person in the new role however, was incredibly daunting.

A lot of it, Chelsea said, was trusting in herself and her own abilities.

“I was definitely jealous of Cian, Alison and Peadar who came in and had their rules and their set agenda, whereas I felt like I was creating everything myself.”

Another issue for Chelsea was the challenge of making herself known, a situation not helped by Covid.

She found huge disconnect between herself and the staff members, and students in particular.

Many didn’t seem to know what she did or what to contact her about.

She also found herself being left out of meetings because “people didn’t know I existed.”

It was Cian, Alison and Peader who began ensuring she wasn’t left out.

They took it on themselves to remind people to invite Chelsea to meetings, checking everything they were invited to.

If students were contacting them about something that was now under her role, they sent them on to her, something she really appreciated.

“They really had my back from a really early time,” she said.

UL campus has been almost entirely closed for just over a year now, but in spite of this challenge, Chelsea is proud of what she has accomplished in the new role.

She organised many awareness weeks and campaigns, such as UL’s first ever Black History Week, in October 2020, and producing an awareness video as part of Sexual Assault Awareness month.

She was also involved in developing the Gender Recognition and Identity policy and has championed the establishment of a staff and student LGBTQ+ network group.

Her proudest achievement though is pushing UL to begin overhauling the Dignity and Respect policy, the mechanism for reporting bullying and harassment within the university.

“We’re still working on it, this is gonna take a while, but it was something that I fought to get acknowledgement about,” she stated.

“Students have fallen through the cracks on this, we need to change this.”

The podcast is hosted by final year journalism students Nicky Anderson and Cathal O’Sullivan, with Chelsea as the ‘stage mom’, sourcing and contacting interviewees.

“It’s something I’m very proud of, and I’m sad to give it up,” she said affectionately.

“I’d love to see it through and keep it going but I think it’s time for someone else to see it with fresh eyes.”

Stepping down as Communities Officer doesn’t mean UL has seen the last of Chelsea Joyce.

She’s recently been hired as the Consent Framework Coordinator, another brand-new position within UL for her to establish.

And her advice for her successor?

Be as creative as possible.

“In every situation, try and think of ‘what is it like for the underdog, for the person who has no voice’.”