An Focal contributor, Jordan Fenlon takes a look at the history behind the #FreePalestine movement 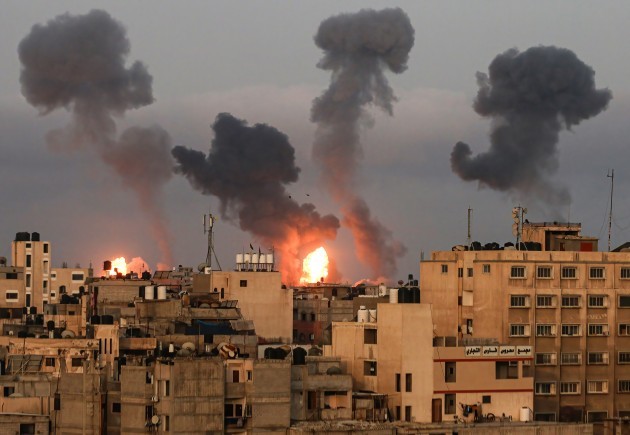 In recent days Instagram stories have besieged us for attention with vivid imagery of the tragedy unfolding in the Middle East, but how did such traumatic scenes make it to our video screens? Why is there fighting? What is Hamas? It’s a long story and like all notable sectarian tensions, it begins with the British Empire.

In the early 1870’s Jewish people in Europe started settling in Palestine, an era colloquially called the “Moshavot” which built up settlements, the most famous of which is “petah tikva”, still standing today. By 1897, in Basel Switzerland, the first zionist congress was convened by the godfather of Zionism, Theodr Herzl, which set forth a mission to return to the ancestrial homeland of the levant, which had come to be known as Palestine, then part of the Ottoman Empire.

Around the same time the British Empire concluded that dominating the middle east was in it’s interests after a victory in the opium wars in which it obtained the region we now know as Hong Kong via acting like a cartel, selling opium to the masses, after that they used the same deceitful methods on the Gajars (selling opium) of Persia to trick them into letting the British exploit their oil resources and establish the “Anglo – Iranian oil company”, which today, we call “BP”. (British Petroleum).

The British Empire wanted to assert its rule over the Middle East, the only hindrance to this was the Ottoman Empire, as faith would have it, World War One began which involved the British against said Ottomans.

The British, French & Russians proposed a plan in 1916 to divvy up the Middle East after defeating the Ottomans, the infamous Sykes – Picot agreement was birthed, the Russians were to take Istanbul and recreate Constantinople, fulfilling the Russian notions of being the 3rd Rome, evident in their kings being called “Tzars” (after Julious Caesar), the French wanted the Levant coast as it had Christians, the Italians wanted the Aegean coast and the British wanted the rest, these plans had no intellectual dept and if you look at the middle east map today, you will see dead straight lines arbitrarily drawn.

To defeat the Ottomans the British devised to divide and conquer by spurring a revolt by the Arabs in the Ottoman Empire against the out of touch Turks who ruled from Istanbul, to do this they deployed T:E Lawrance, aka, Lawrence of Arabia, who succeeded in leading an Arab revolt in return the British promised the Arabs independence for their comradery. However, the Arab’s were unaware of the “Sykes – Picot Agreement”. 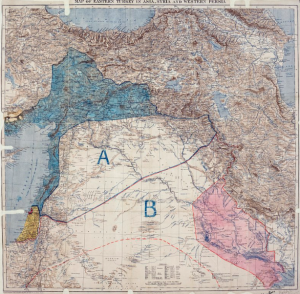 (Sykes – Picot demarcation lines, A for the French & B for the British.)

Arthur Balfour in 1917 declared his intentions to create a Jewish state in the region of Palestine. In the same year the Germans sent Vladimir Lenin on his famous night train to Moscow to end Russian involvement in World War One as he sparked a revolution in Russia.

World War one ended, France & the British got straight to work in betraying their allies in the region, they split the middle east, France got Syria and from it carved the Christian state of Lebanon, and the British redeemed Richard the Lionheart by getting the prize of Jerusalem in what became the “British Mandate of Palestine” (but for simplicity people just call it Palestine or the Mandate) as well as creating Jordan, Iraq, Kuwait, Qatar & Bahrain.

During this period the Jews of Europe became more entranced with the idea of a Jewish state in Palestine, there was however one major caveat: there were already people there.

Jewish immigration kept increasing and it was putting serious strain on British – Arab relations, which was a double edged sword in the most literal sense, as both Arabs & Jew’s did not like the British.

New Jewish cities expanded, like Tel Aviv, built beside the historic port city of Jaffa, and the Jewish presence in the region was increasing exponentially, in reaction the Arabs revolted from 1936 – 1939 against what they saw as a Jewish takeover facilitated by the British Empire, to assuage the Arab – British relations, Britain issued the “White Paper” guaranteeing less Jewish immigration, those years may stand out like a sore thumb, the years of course were when the Nazi regime was just short of overtly genociding the Jewish people of Europe.

The Jewish people in Palestine were politically split, the right wing Revisionists and Socialist left and their respective militias, the Irgun, Haganah & Lehi united in the struggle against the British, known as the Ma’avak to open the borders to Jewish refugees.

World War Two ended and after the horrors of the holocaust, the salience of a Jewish homeland became of immediate concern, the British state was badly damaged and decided to pass the issue of the Mandate of Palestine to the newly minted United Nations which proposed a resolution in 1947 to partition Palestine between a Jewish & Arab state, of course, neither side liked it, and on May 14th 1948, Israel was born as prime minister Da’vid Ben Gurion declared independence in Tel Aviv, which instantaniously resulted in an invasion by all of it’s neighbours, miracuassly the new Jewish state survived.

However during the war the Palestinians fled for shelter, consequently, they lost their homes in the process as they were seized by Israelis. On May the 15th the “Nakba” happened (catastrophe in Arabic) the Palestinians seeked refuge in Lebanon, Jordan & Egypt, where to this day remain unable to return to their homes. 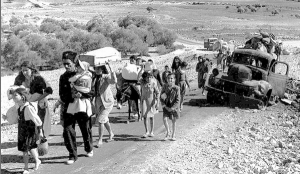 (Palestinians leaving their homes in search of safety: 1948.)

Post the war of 1948, Israel gained more territory than it bargained for, but the Jordanians took Jerusalem, for years the Old City in Jerusalem was in the hands of the Jordanians where the Jewish Quarter lay derelict, something that the Israeli’s would hold a grudge over as it is the holiest site in Judaism.

On June the 6th the state of Israel conducted a pre-emptive attack on it’s neighbours, in 6 days Israel took the whole Sinai Peninsula of Egypt, the Golan Height off Syria and the West Bank & main prize, Jerusalem off Jordan.

Jerusalem, home to the “old city” within the confines of the wall of David the old city holds 4 quarters, the Christian, Armenian, Jewish & Muslim Quarter. It is situated in East Jerusalem, a majority Arab area of Jerusalem at the time. The new Israeli state took an esoteric political stance on Jerusalem which is essentially: “It’s ours”.

Following the war Israel conducted a census of Jerusalem and the Palestinians of the city were given permanent residency, if, they could prove their connection to Jerusalem, which some couldn’t, thus losing their property rights and their homes being bought by Jewish Israelis, thus diminishing Palestinian connection to the city they call Al – Quds.

A situation exacerbated by the gears of bureaucracy built by the Israeli’s. Building permits for Jewish Isreali settlements encircled the Arab majority East Jerusalem, and with it came increasing hostility towards the Arabs, coupled with rising real estate value and rents, the Palestinians were simply priced out of their homeland and pushed to the outskirts of Jerusalem, which affected their “permanent residency” status, making any hope of returning, legally implausible.

By 1993, East Jerusalem was a Jewish – Israeli majority area and a policy of expanding Israeli dominance in the city & the West Bank was the modus operandi for every government in Israel.

Settlements, which are Jewish villages, expanded into the West Bank, which was majority Arab, and which the Israelis call “Judea”. In reaction violent attacks by Palastinians emanated from the West Bank, in reaction Israel erected separation walls, which cut into territory belonging to the Palestinians.

The PLO represented the Palestinians, lead by Yasser Arafat, who eventually came around to attempting peace with Israel, known as the Oslo Accords, signed by Yassar Arafat & Yitzhak Rabin, which established ties between the two peoples, however, it was an unpopular move, the Palestinians got a mesley amount of land in the West Bank for self governing called “Area A.” & the Israeli’s public was outraged by it’s acknowledgment of a Palestinian reprasentative government which would become the Palestinian Authority (PA).

However it was a step towards peace, which tragically resulted in the assasination of Yitzhak Rabin, gunned down by a far right Israeli.

The Oslo Accords were subsequently paid homage and homage only, and by 1997 Benjamin Netanyahu was PM, peace was unofficially off the table, which made the Palestinian government in Ramallah known as the PA quite upset, but they showed restraint, which spurred a reactionary movement called “Hamas”, which ostentatiously presented itself as the real resistance to Israel, it was Islamist, militant and gaining popularity.

The Gaza Strip, a mainly Palestinian area was occupied by Israel and settlements of Jewish Israelis were established namely, Gush Katif, but in 2005 Israel removed it’s thousands of settlers from the area, a very unpopular move for the ruling right wing party under Ariel Sharon, who wanted to go from war hawk to a loving grandfather persona, with the pull out of Israeli forces, Gaza was to become a Palestinian governed area.

However the following year in 2006, Hamas won the election & took over the Gaza Strip, Hamas was intransigent in it’s opposition to Israel. For many years back and forth skirmishes and wars were in abundant supply, the 2014 war, operation protective edge was the most deadly. In the years since, Hamas peddled in uncompromising hyperbole, calling for the annihilation of Israel & branding the Palestinian government in the West Bank as “collaborators”.

A few weeks ago Israel tried to evict families in Sheikh Jarrah by using the bureaucracy it built by having claims taking to court that the Arab families living in this suburb (Sheikh Jarrah) are occupying houses that used to be owned by Jews, and that they should be evicted & their houses given to Jewish Israeli’s, an issue ongoing since the early 2000’s, the most infamous case being the “Al – Kurd” family.

This was the straw that broke the camel’s back for the Palestinians who see this as Jerusalem being pulled from underneath them. Public protests ensued which saw Jewish Israelis counterprotest, these protests turned violent and the IDF were deployed to keep the peace, in favour of the Israeli’s. In reaction, Hamas fired rockets at Jerusalem.

Israel responded with heavy force, which left both sides in a quagmire, with such heavy attacks on Gaza by Israel, Hamas was again forced to respond, and in response to their response, Israel was forced to respond, both governments are now battling for legitimacy as they present themselves as “the protectors of their people”. Violence begetting violence & saving face is a motif of middle eastern politics.

A situation exacerbated by a reckoning for both hardline camps, that cooperation is in fact possible, recently the state of Israel was having government coalition talks which included an Islamist party cut from the same cloth as Hamas, which would of been a major blow to Hamas & Likud as their relevance is largely based on division.

Currently a ceasefire has been called, but it is unlikely to last.

This article left out a plethora of important events, organisations & various factors which also contribute greatly to the situation, things like the intifada, lebanese war, black september and so on, but the articles aim to delineate how we got to this point and what Hamas is.