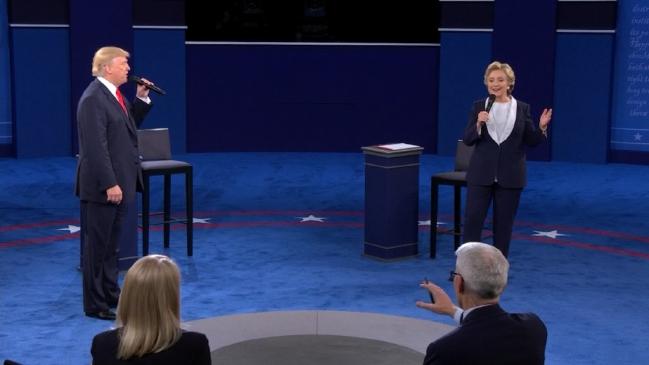 In an election season already rife with continual upsets and harsh accusations constantly being thrown, even more scandal was brought into the political boxing ring last week.

A 2005 video capturing the audio of, then 59-year-old, Republican party nominee Donald Trump in a lewd conversation with, then-anchor of the show Access Hollywood, Billy Bush. The audio reveals Trump boasting about his extremely questionable conquests of women, seemingly done so through excessive groping and unwelcome sexual advances.

The video sparked the largest cries of outrage the Trump team’s experienced yet. Many influential Republican leaders who had previously expressed endorsements for Trump quickly pulled them and usually accompanied their announcements with sharp calls for him to drop out, despite his adamant promises he would do no such thing.

Such a hostile background is what set the stage for the second of three presidential debates this past Sunday night, an event which took place at Washington University in St. Louis, Missouri. A town hall-styled event in which real voters could attend and ask the candidates questions, the 90-minute evening was moderated by CNN’s Anderson Cooper and ABC’s Martha Raddatz.

Though the two’s attempts to keep the nominees on topic were certainly admirable, from the start it was clear that such a thing was simply not going to happen.

The debate’s tone was set the moment Trump and Clinton appeared on stage. Both neglecting any notion of a handshake, they simply stood and waited for the inevitable issue that would first be addressed; and sure enough, before having citizens launch their questions to start off the night, Cooper stepped in and prompted Trump for an explanation.

A half-apology was issued, with an iteration that Trump “respects women” and how in all honesty, it was simply “locker-room talk”, a phrase he uttered at least a good 5 times throughout the duration of the evening. Naturally, Clinton got time to respond with her aversion towards what had been said, to which Trump eagerly fired back with reminders of her husband’s (former US President Bill Clinton) past infidelities.

On and on it went. What can only be described as bickering between the two ensued, with a wide range of popular controversies making their appearance: the newly-made sexist comments, Trump not paying taxes, Clinton’s deleted emails and Trump wanting to arrest her as a result.

Once 30 minutes in and somewhat clear from the muck, a tentative start was made on the real issues- and in all reality, that’s how the rest of the debate felt. Tentative.

Healthcare was discussed, with Trump favouring the total eradication and replacement of Obamacare and Clinton preferring to instead fix and build upon it. International security addressing Muslim relations and Russian technology hacks were also brought up. The evening was rounded off by further reflection on who the new Supreme Court nominee should be, along with taxes and clean energy.

Miraculously, this debate saw a much calmer Trump, though when upset he appeared to almost try and walk it off as he paced oddly around the stage while Clinton talked.

Clinton herself remained in her usual collective control, though there were moments during the night where her sheer frustration would appear through grimace-like smiles. She was also forced to waste valuable time in defending herself against false accusations.

Though the two candidates did shake hands in the end, the gesture meant little. Online, Clinton was again declared winner of the evening. From my perspective neither of them really won- there was simply too much fighting with not enough constructive discussion to balance it out.