Francis Higgins takes a look at the state of democracy and what should naturally replace it. 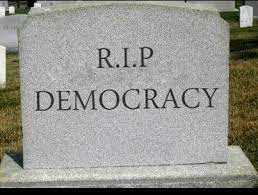 Democracy is an inherently flawed concept, the main use of governance for the past 2 millennia has resulted in creating the thought process that has allowed for the commodification, dehumanisation and rapid destruction of the planet.

When Marx saw the class hierarchy back in the 16th century it only pales in comparison to the world we live in today.

The Neoliberals have fast-forwarded our species into extinction at a rate that is now unstoppable to alter.

The modern-day slavery of workers, through their pay, has garnered a society that is centred around the individual and not the collective, this is not a view held by many, which is why I am right, because we know that an individual can be smart, but a group of people will always be dumb – Isaac Newton.

This is exactly why I propose the following about democracy, it should be gotten rid of, voided, scrubbed from the world, and in its place, the system that allowed humanity to install flourish in its infancy, the system that created some of the greatest states the world has ever seen.

But as we know, social hierarchies are all around us, just look at lobsters, even animals with tiny brains exhibit and partake in the social hierarchy, which is why, me with my huge brain, is making this totally air-tight comparison.

So, with social hierarchy a universal given, that must come into effect with the returning of the system. What system?

That of the totalitarian dictatorship of course.

Throughout history, the countries that have shed the shackles of democracy and reverted back to the simple hierarchy of a state-run by an all-knowing and tough leader created the likes of the Roman Empire, the Greek Empire and the great Italian and German states of the 1930s, and while yes those latter examples are flawed in terms of their xenophobia, I argue that that was simply a misstep, as racism is only a new concept.

The creation of nation-states in the 18th century through the ever more increasing democratising of Europe, we saw enriched tribalism between each new created Sovereign state, and with each elected government, the task of finding blame for the government fell upon, what Gramsci saw as the subaltern, the other.

Before the democratising of Europe, it was about the holding of land.

Why aren’t the Mongolians an inherent xenophobic culture, they participated in a greater death toll per capita than any modern state but aren’t discussed in the same breath as the fascist regimes.

What about the moors in Spain, or the reclaiming of Jerusalem in the crusades, yes to reclaim territory from other ethnicities, but it was less about who they wanted to eradicate but why – that why being the holding of land deemed sacred.

The crusades would have happened regardless of who held Jerusalem.

It was not until the modernity of democracy and the stagnation of borders that the reason as to why tribalism shifted from obsession with land to hatred of others.

This is the very definition of Hegelian dialect, in the stagnation of the modern world, the conflict between people has shifted from one that seeks to gain land and resources for your people, but to who exactly are your people.

Now I have no bone to pick with graveyards, the past is the past.

We can only seek to change the future, by learning from the past.

We see every day the negatives of democracy, the mistrust of the state, the lack of work accomplished and the ever-growing vilification of the subaltern.

By reverting by to totalitarian dictatorships, just as we see in the ever-growing leading superpower of the world; China.

The abolition of the individual voice kills the manifesting of the agreed destruction of the world.

Democracies are doomed to create an ever corrupted system.

In countries that have attempted to find the right track of socialism, the main example of a state where it has flourished – Bolivia, created problems because the leader could not run again, and through coups new governments and riots, the old socialist leader was reinstated. All of this shows how having the right all supreme leader is the solution to such political and social strife. Without it, Bolivia was doomed to circle the drainpipe of democracy until it finally fell into civil conflict.

The Bolivian case is just the most recent example of why democracy is a system that produces too many problems for it to be maintained, and the re-introduction of totalitarian dictatorships curtails the speed at which humanity tightens the noose around its own neck.