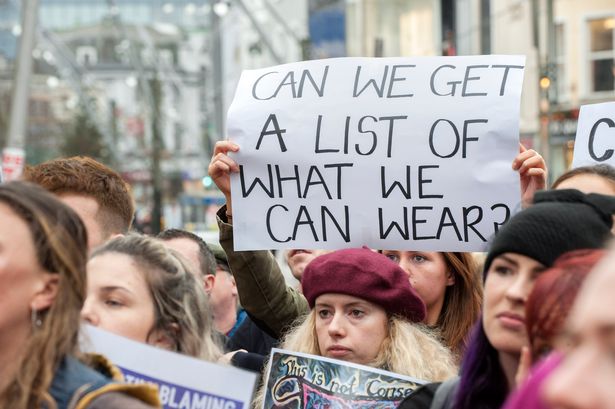 The actions of a barrister in the recent “Cork rape trial” has caused uproar across the country.

A seventeen-year-old girl was in court, facing her attacker when a defence lawyer referred to the underwear she was wearing on the night of her rape.

“Does the evidence out-rule the possibility that she was attracted to the defendant and was open to meeting someone and being with someone? You have to look at the way she was dressed. She was wearing a thong with a lace front,” the barrister told the jury, who later acquitted the man.

The comments caused a national outcry of rage and support from the wider public.

What underwear a woman, or any person is wearing should never be taken as consent.

TD Ruth Coppinger held up a thong in the parliament chamber to bring more attention to this topic. Taoiseach Leo Varadkar stated on RTE 1: “No one asks to be raped.”

UL student, Aisling O’Connor, was present at the protests which took place in Limerick City.

She explained that she went to the protests, to show support for the young woman at the centre of the trial.

There were only around thirty people present, but the presence of Limerick Mayor James Collins was seen to represent the solidarity Limerick has with the seventeen year old girl.

When asked about her thoughts on the verdict, Ms O’Connor said she was “disappointed, but not surprised.”

While it is heartbreaking, news like this is almost expected nowadays.

The journalism said she believed a movement is happening, especially with the Ulster Rugby trial.

She hopes in the future “we can all look back on this like it was a bad dream”.

He emphasized that UL Student Life are continuing to run workshops about consent and sexual harassment such as IT Stops Now campaign.

There is a strong sense of hope in UL and nationally that what this girl went through is unacceptable and that going forward things will change for the better.

Whatever we wear, wherever we go, yes means yes and no means no.