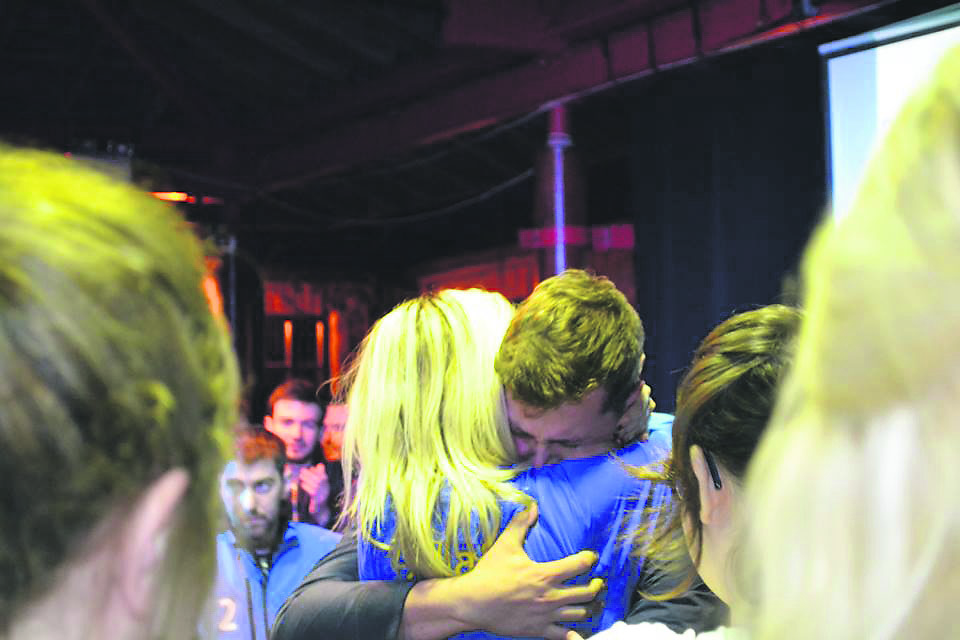 By Eilís Walsh and Tomás Heneghan

Earlier this month, students at the University of Limerick elected a new Students’ Union sabbatical team, with a record turnout of 32.5 percent.

The announcement of the new team, who will take up their positions during the summer at the University of Limerick Students’ Union (ULSU), was made on the night of the vote at popular on-campus bar, the Stables Club.

Ms Dunphy is the first female ULSU President since the 2013/2014 Academic year and only the third female president of the Union’s now 40 presidents since its foundation in 1972.

Speaking to An Focal after her win, Ms Dunphy said: “It’s very surreal still. It’s been hugely enjoyable, the whole campaign and I’m looking forward to the year ahead.”

“My main aim would be to actually create the [UL app], if I could, with the map of UL because I think it’s something that is needed and just to work with my sabbatical officers and have a fantastic year and make a big improvement in UL as much as possible.”

Mr O’Donnell, who will take over the role as Welfare Officer from Ciara Corcoran during the summer, said of the election result: “It’s crazy, knowing that we were part of a record-breaking election – absolutely phenomenal. It hasn’t really kicked in yet.”

Speaking about his plans for the next academic year, he explained: “I think anyone who saw my campaign saw that mental health is a massive thing for me, so I’m going to be doing a lot of work with that.

“In working with that, we are going to try and sort out a sensible drugs policy in the college because there is a strong correlation between the two, so obviously I’m going to do everything I can because this isn’t a thing I can bring on my own, I’m going to have to get the support of the two other sabbatical officers.”

Mr Foley, who will in a few months time take over from current Academic Officer, Marian O’Donnell commented to An Focal: “It really hasn’t set in yet but the biggest thing is I couldn’t have done it without my campaign team and to be quite honest, they’re not a campaign team, they’re friends, so I’d put all the success down to them.”

“My main plan is to get the student forum up and running so students can go on and get their module description and all the details they need to know about the module from a student point of view, because I think it’s very ambiguous getting it from a lecturer’s point of view because they know a lot more than students.”

There was an earlier controversy in the lead-up to the election when current ULSU President Colin Clarke failed to complete all parts of his nomination form by the deadline for submission, as he had intended to run again for position of President of the Union.

Mr Clarke and a second candidate hoping to run for President appealed their exclusion last Friday from the election to the Electoral and Referenda Board (ERB), however their appeal failed.

The statement also explained the reasons for their elimination, saying:

“Schedule 1 of the Constitution provides amongst other things that “Nomination Forms must reach the democracy development manager or such other person nominated by the ERB not later than 5pm on day of close of nomination”.  In addition the ERB Rules and Guidelines 2016 at paragraph 1.5 provides that nominations close Friday 4th March (week 6) 2016 at 5pm.

“Page 3 asks the candidate to formally agree to uphold the ULSU constitution. The candidate also must confirm that they and their campaign manager have read and understood and will abide by the rules and guidelines outlined by the ERB for the sabbatical officer’s elections 2016.

“Under Article 11 of the ULSU constitution the procedure for all elections and referenda shall be determined by the ERB. Failure to both complete and execute the confirmations required on page 3 and the failure of the campaign manager to execute the confirmations required on page 3 means that the nomination form in the form made available by the ERB for the purpose of the nomination is incomplete.  Under the ULSU constitution the ERB does have the authority to require the nomination form (subject to the requirements of the Constitution) to be submitted in the form required by the ERB.

The Returning Officer’s decision on the appeal shall be final and binding on all parties. USLU Constitution, Schedule 1. 46”

The statement from the ERB concluded: “It is an unfortunate set of circumstances that have led to Jack’s and Colin’s elimination from the election.  We wish Jack and Colin all the best in their respective future endeavours.  No further comment will be made by the ERB members on this matter.”