An Focal’s Siadbh Redmond spoke to Munster star Gavin Coombes on his recent performances for Munster, his growth as a player and the ‘West Cork Mafia’. 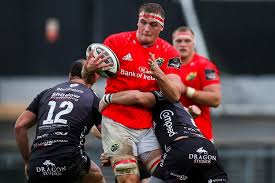 West Cork back-rower Gavin Coombes is hot off his back-to-back man of the match performances against Ospreys and Glasgow respectively.

The number 8 has been in terrific try-scoring form for Munster, scoring a hat-trick in the Ospreys game.

Coming from Bandon Grammar Secondary School, Gavin said there was a huge jump between school’s rugby and the Munster academy. “I went from doing one gym session a week to doing four a week, with training every-day on top of the gym”.

Playing in the Irish Under-20’s squad in 2017 gave him major confidence going into the Munster set-up “international rugby is always a step up, but I gained great confidence in my game through-out playing for Ireland”.

Right throughout his time playing for Skibbereen RFC and Bandon Grammar, Gavin had always played at number 8, but when he moved into the Munster Academy, he played second row, number 7 and now eventually back to his original number 8.

“I was happy to slot into any position made available for me, just so I could get playing time”, Coombes added.

In his recent outings for the side, Coombes has been not only scoring for his side but also winning vital turnovers and making hard tackles. “I’m not doing anything different this season as to previous ones, I am just getting an opportunity to play games and perform when I get those chances”.

With internationals like CJ Stander and Peter O’ Mahony missing from the province, it is giving younger players like Gavin a chance to show what they are made of against tough opposition in the Pro-14. “Your goals change when you’re not picked for a match, I might do extra gym sessions, or spend longer at rucks or tackling after training”.

During lockdown Coombes has been more than impressive for Munster, with his man of the match performances being celebrated with his teammates, rather than family and friends. “I have done most of my playing with no fans in the stadiums, so I don’t take much notice of it anymore, but it will be great to get fans back to create more atmosphere”.

Described as the “West Cork Mafia” by commentators, Gavin says it is great to be playing with people he has grown up with.

“It is a great feeling to have them playing around you, there has been a lot of work done in west cork with rugby and it is really starting to show through. I’ve grown up playing against these guys and now to be playing with them at Munster is fantastic”.