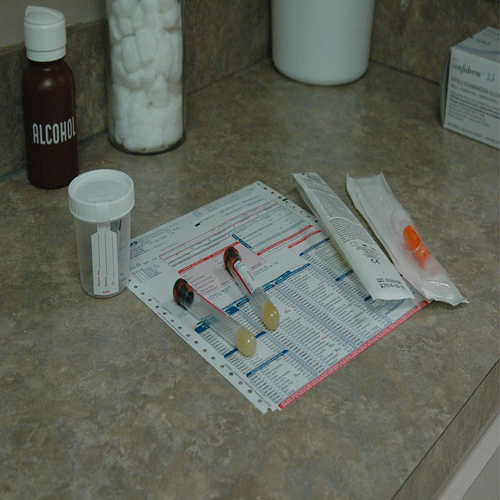 Before we start, I have never had a test like this before but I do fail a test every semester.

After a steady increase of STIs in UL, I have taken a new approach on becoming a responsible sexually active adult.

I decided to bite the bullet and overcome the social stigma that is peeing in a test tube and letting a doctor test if I have an STI.

On the day, I began my journey by walking through the maze that is the main building to discover EG010.

As we arrived I noticed that there seemed to be a nice flow of people being screened.

I was greeted by a nice lady who told me that everything is going to be alright.

Many people consider an STI test a scary process but (for me anyway) it was simply just peeing into a cup and trying not to overfill it.

She explained clearly what was being tested and what to do if there is a problem afterwards.

She went and pointed me to the bathroom down the hall where I was greeted by another nurse.

Except, this nurse was on the frontline for collecting male urine samples.

I noticed there was a great deal of hygiene involved when the guys were handing over their samples.

To make the situation a little more light hearted as I was entering the bathroom, the nurse shouted: “If you hit the target, I will have a little present out here waiting.”

Next thing I know I had hit my target and was holding my prize cup of pee in my hand.

No stage fright or nothing.

I was out the door smiling with a sense of relief.

I walked up to the nurse to claim my prize.

What was the prize, you ask?

It was none other than a “Johnny’s Got You Covered” condom.

I was told that I would receive a phone call if I have an STI and now feel that I am stuck in limbo, if I’m honest.

All I know is that if I’m positive I will receive a phone call from an unknown number asking me will I come to the GU clinic next to the hospital.

Limerick Stands Up Against Mental Illness