“With half-baked characters, a nonsensical plot and villains straight out of a Saturday morning cartoon, Godzilla vs. Kong may not be the high-tier piece of filmmaking one would hope for,” writes Kevin Ruddy. 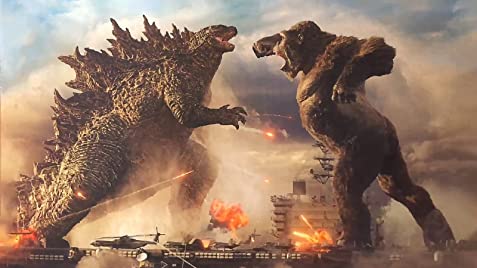 After several pushbacks and speculation, Godzilla, and King Kong have finally had their long-awaited grudge match almost fifty nine years in the making after the extremely silly 1962 Toho original. It is the equivalent of a heavyweight show-down the likes that Muhammad Ali and George Foreman would be proud of and to put it simply, it delivers, somewhat.

Godzilla vs. Kong is the fourth instalment of the ‘’Monsterverse’’ by Legendary Pictures and Warner Bros. The series mostly focuses on the two titular characters having appeared in Godzilla (2014), a prequel set in the 1970s Kong: Skull Island (2017) and, Godzilla: King of the Monsters (2019).

Director Adam Wingard (You’re Next) delivers on what you would expect from a big silly blockbuster of this nature, by giving long time Kaiju fans what they came to see, a fun, fast-paced and city-destroying spectacle that fans of both monsters will be satisfied with, even if the rest of the film fails to live up to the monster-sized hype.

The film starts out five years after King of the Monsters (2019). Kong is now much older and considerably bigger than his teenage years in Skull Island (2017). This time, however, Skull Island is uninhabitable, and the big ape is being looked after by Dr Ilene Andrews (Rebecca Hall), alongside her deaf adoptive daughter Jia (Kaylee Hottle) who has a special bond with Kong. Joining team Kong is Dr Nathan Lind (Alexander Skarsgård) whose story takes them and Kong across the pacific in search of the infamous ‘’Hollow Earth’’.

Godzilla, who was seen as the world’s protector has now turned against humanity, why you ask? It is not really fully explained but by the end of the film you can make your own assumptions. The big Lizard starts out attacking the shady corporation Apex, sensing foul play and just being an overall a**hole to humanity.

Team Godzilla consists of Mille Bobby Brown and Kyle Chandler as the Russel family, the daughter-father duo from the previous film, they suffer from any sort of screen time and development. Brown is wasted with a subplot involving a sceptical conspiracy theorist who believes Apex is up to something (They are!) All of the old and newbie characters are not really given much from the script, apart from Jia, they are mostly one-dimensional, merely used to anchor Godzilla and Kong towards one another.

When Godzilla and Kong do fight, it is wonderful to behold, the VFX is top-notch, and the sense of scale is jaw-dropping, it is a shame many have to watch the two titans fight on the small screen but nonetheless it is still a spectacle. Not only do the pair face-off on an aircraft carrier in their first encounter, but the climatic Hong Kong battle between the two is what the film builds up to. Rather if you are Team Godzilla or Team Kong, both monsters get moments to shine and by the end of the movie, both fanbases will be thoroughly pleased.

While Godzilla is perceived as the villain and is truly vicious, Kong is the heart of the story and is the only true character who has an arc. His relationship with Jia is the driving force of the movie, only being able to communicate through sign language, their connection is the only emotional beat to the film, and it sticks the landing perfectly.

Ultimately, with an impressive runtime of 113 minutes, the film runs at a fast pace and gets straight into the action. Although with half-baked characters, a nonsensical plot and villains straight out of a Saturday morning cartoon, Godzilla vs. Kong may not be the high-tier piece of filmmaking one would hope for. With great action, a wonderful sense of scale and getting to see Godzilla and Kong on-screen together, it delivers on what you expect it would deliver, a love letter to both characters’ histories and a satisfying culmination of these iconic monsters.

These Shoes Are Made for Locals: Limerick Business Adapts to Lockdown