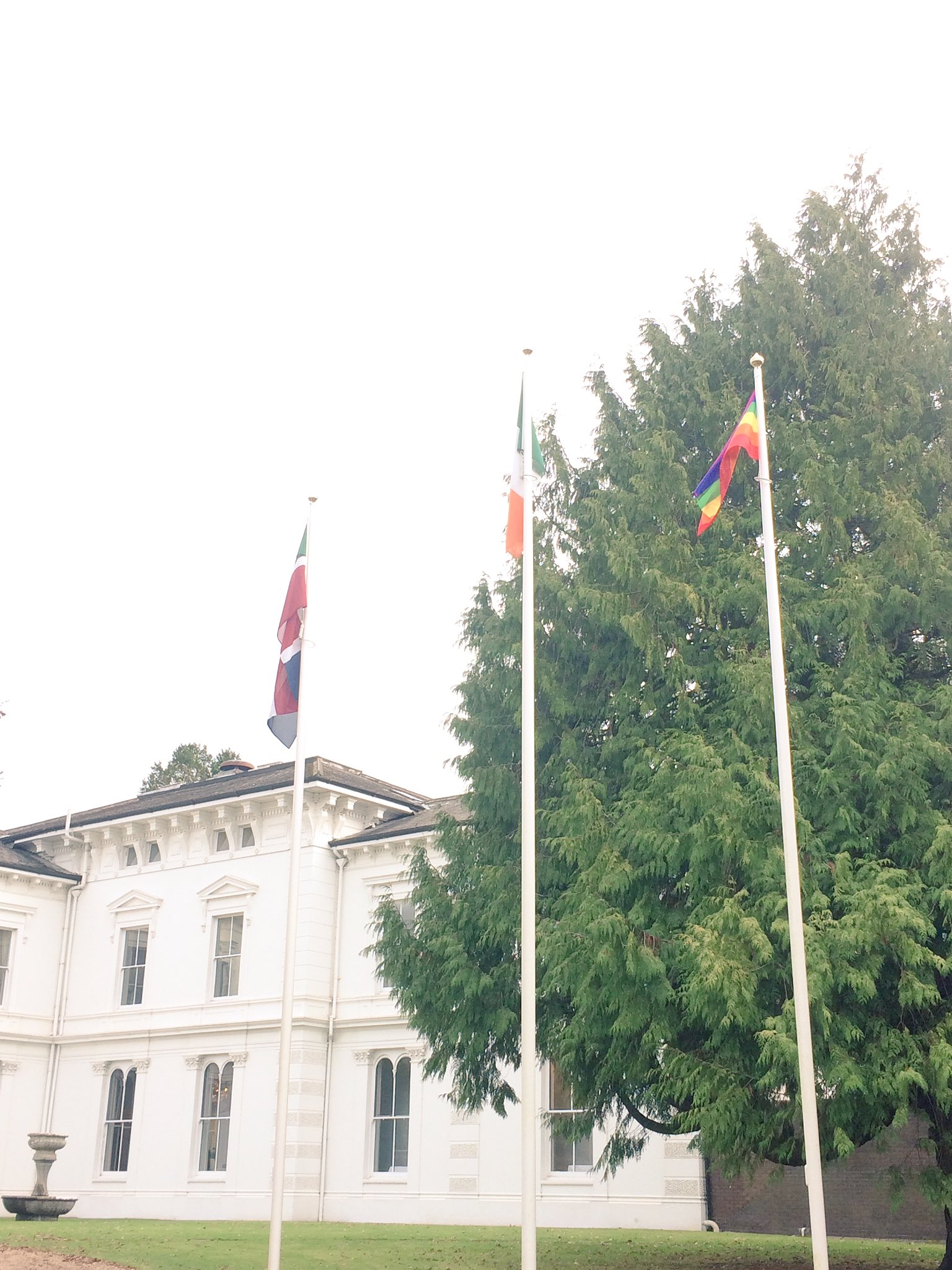 The rainbow flag is flying outside Plassey House this week for Trans Health and Awareness Week.

The rainbow flag is a symbol of lesbian, gay, bisexual and transgender (LGBT) pride and LGBT social movements.

It was raised two months after anti non-binary graffiti scrawled on a gender neutral toilet in the University of Limerick (UL) was discovered.

The week is the result of a “concerted effort” to ensure that issues which specifically affect trans students would be addressed, Alena Kiel says.

Kiel is a second year PhD student and tutor in the department of English, Irish and Communications.

They also identify as a non-binary transgender person.

They have been developing several projects with Student Life to improve administrative understanding of and accommodations for transgender students and staff for some time now, and kicked off Trans Health and Awareness week with a ‘Trans 101’ workshop on Tuesday.

“My impression is that students want to be helpful/supportive of their trans peers, but feel unsure how to do so or what kind of language to use,” they said.

“When we can give people the right words to use, they can take away a sense of empowerment and an understanding that it’s easier than they think to be supportive.”

Alena has experienced harassment and discrimination on campus, and says most of their professional peers refuse to use their proper pronouns, even though they’re in their email signature and they often wear a badge that says “they/them”.

Some reasons provided by their peers as to why they couldn’t use Alena’s pronouns included “it’s too hard to remember” or they’re “grammatically incorrect.”

“I have had slurs shouted at me on multiple occasions, from people walking by on campus or passing in cars as I walked to my student accommodation.”

The English and Sociology tutor said they often speak about gender and queer theory in their classes: “I have had students in my tutorials actually laugh in my face or engage in other disrespectful behaviours when the topic comes up.”

Alena has been working on a volunteer basis with the Student’s Union for the last few years, providing LGBTQI+ and Trans 101 trainings to student representatives, sabbat officers and Student Life staff.

“I helped draft a Student Name Change policy for the SU to use when trans students want to run for office, and started a conversation around providing more gender neutral options on student and staff-facing paperwork,” they explain.

This includes a third, ideally write-in, gender option and the inclusion of the neutral title Mx.

Alena wants to ensure there are policies in place to protect trans students and staff, and a system of accountability to ensure that those policies are upheld at every level.

Another idea Alena has comes from her alma matter in the United States.

“I loved seeing those stickers everywhere on my campus because it made me feel safe and confident that even if I was discriminated against or harassed, I had a wealth of places to go and people to talk to for help.”

“I would absolutely love to see something like that at UL, and I’m trying to figure out the logistics of it currently.”

Alena hopes the week will show people that, in regards to trans inclusivity, that “UL is a safe place.”

“Where people are well-informed and understand a variety of perspectives, and that UL has specific policies in place and will stand up for them should something like hate speech or harassment occur.”

“I want people to see that UL and Limerick are safe places to be who you are, gender identity included.”

They hope Trans Health and Awareness Week sends a message to trans students and staff members, whether they’re out or not, that UL “cares about them, respects them, and values them as individuals.”