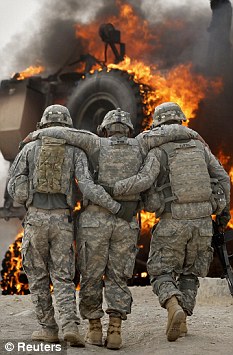 For many, the Iraq war seems million of miles away. For others,it rages on in their memories.By Kate Devaney

It was a normal September day.

The summer was ending, the children were going back to school.

Some people still lay in bed, their day yet to start.

For others, their life would end and the day’s date would forever be remembered in history.

A war had begun.

For Melonie, she still remembers the event taking place and her fifteen-year old self watching through a television screen, her blood
running cold.

It was at this point she was certain she was going to join the U.S Army.

“Everything changed in Iraq,” Melonie Kotschwar said, a mature student in UL, doing her Masters in psychology.

Melonie joined the US Army Reserves when she was only seventeen years old, being the only one to raise her hand after a Commanding Officer came to her school asking if anyone wanted to join.

“Since I was a little kid, I’ve always wanted to be in the military” she said.

Her own Grandfather had served in World War II, however he rarely reflected on his experience, being too traumatised after his Navy Ship was hit by a Kamikaze, killing a lot of his friends.

Melonie took her army oath when she was only seventeen years old and recalls how you “pretty much sign your life away”.

“You are giving yourself to the government, not a person, a soldier. They can put you anywhere.”

After graduating and completing 9 weeks of basic training, she then went on to do job training.

Only three months after completing job training, she was called to Iraq.

Physically, she was ready.

So, she flew out.

Her job was convoying, protecting local truck drivers that were bringing food and water to the civilians.

There was also a gunner on her convoy truck, which she gunned on herself for three months.

However, she said truck driving was the hardest, often working off as little as 3 hours sleep and having to deal with small arms fire and
constant roadside bombs.

Out of every four convoys they had, there would be one if not two roadside bombs.

“We would just be waiting, on that one spot, looking at the bomb, hoping it doesn’t go off.”

There were many dangerous routes but the hardest was the 3rd furthest from base, known as the “Widow-Maker”.

It is a bottleneck road and once you drove in, the only way out was to keep going forward.

This made it easy to plant bombs and shoot convoys.

After long hours of endless driving and adrenaline pumping through your body, willing it to stay alert, they returned to base for some
down time.

“As a female, it’s much harder to relax,” she said.

At this time, out of the one hundred and sixty-nine soldiers in her group, only twenty were female.

Melonie said that the guys could mess about and have fun, but for females to let go it was a lot harder.

There were a lot of rumours cycled around and she never felt like she had “off-time.”

“The atmosphere was so toxic at times,” she recalled.

Matters became worse after she was sexually harassed by another male soldier, who was twenty years older than her.

After reporting it to officials, she did not get the help she needed, and she felt they did not support her. She felt ostracized.

“There are a lot of politics in the military,” she said.

So, she decided her time in Iraq was done.

But the trauma followed her, and she suffered severe depression and war PTSD (Post-traumatic stress disorder).

On top of this, after being sexually harassed in the military, it brought back repressed trauma of her childhood sexual trauma at the age of
6, when she was sexually abused by her baby-sitter’s 15-year old foster child.

She also had severe culture shock, saying it was harder to adjust to life coming back then it was going to Iraq.

“Kids in Iraq who have no shoes, live in a war-torn area, don’t get alot of food. Kids were selling pornography to get by,” she said.

However, Melonie credits the military for making her who she was today, and she is now pursuing a master’s in psychology, focusing on
helping those who experience PTSD and sexual trauma.

“I know the difference between first world and third world problems”.

The Charities Of UL Charity Week 2019