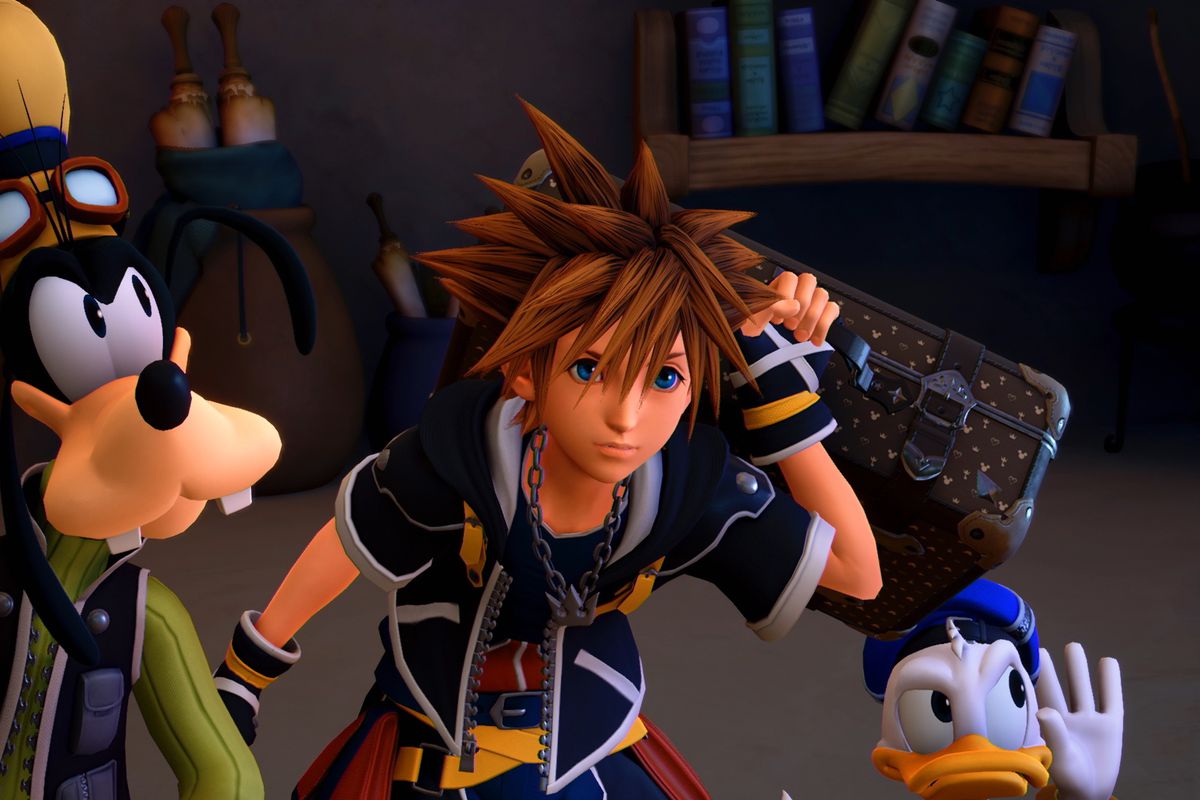 I would suggest not reading this review until at least you have finished Kingdom Hearts 0.2: A Fragmentary Passage or are up to date with the story up to then.

At some time in the future I will be doing a Kingdom Hearts retrospective as well as a Beginners’ Guide to getting into Kingdom Hearts so if you want, wait for that.

Having said that, from here on out, spoiler warnings are in place.

Continuing from where 0.2 left off, Sora and the other Keyblade wielders are nearing the final battle with Master Xehanort, the overarching antagonist of the series. However, following the events of Dream Drop Distance, Sora has lost the bulk of his power with the Keyblade, as well as the Guardians of Light being short a few members.
Thus, he goes with Donald and Goofy to train with Hercules.
At the same time, Riku goes with King Mickey to the Realm of Darkness to find Aqua, who is still trapped there after the events of Birth by Sleep.
Finding her would allow them to find Ventus’ body, while his heart is in Sora, and discover what happened to Terra.
While all this is going on, Kairi and Lea, Axel’s Somebody, are training to become Keyblade wielders.
The septet are also trying to figure out how to save Roxas, Xion, and Naminé, all of whom seemingly cannot exist simultaneously with Sora or Kairi.
And yes, the game is as confusing about how this is all explained.

While this sort of jigsaw plot was expected, the way it’s done is very haphazard.

Twice in the game, the player changes control to other characters, and while they are not nearly as complicated as playing as Sora, it feels like a very token move, like an excuse to not have a cutscene.

Master Xehanort, in his attempt to re-forge the Chi-blade and control Kingdom Hearts, has created the “True Organisation XIII,” twelve other antagonists who become vessels for his soul.

The True Organisation is mostly made up of characters who have previously been used as vessels in the past or were members of Organisation XIII.

Interestingly, it’s mostly made of the characters who weren’t really focused on in Kingdom Hearts II, such as Marluxia and Larxene from Chain of Memories and Luxord.

This is a welcome addition, as I felt those characters were somewhat underdeveloped in their games and 358/2 Days did little to flesh them out.

Along with them are other former members of Organisation XIII, now reformed into their true selves again. In particular, Ienzo, who was once Zexion, acts as a mission control for Sora and Riku in their respective goals.

I like this addition, as the first six Organisation members were initially good guys before being turned into Nobodies, so them helping the protagonists feels real.

As well as that, there is a very clever twist with a reformed Organisation member that I’ll admit; I didn’t see coming.

Was it because it was a shrewd move or was it because the game is being held together with nostalgia and chewed gum? I honestly cannot tell.

Gameplay is really where this game shines through, in my opinion. It takes aspects of most of the other games’ combat and rolls them into a chaotic mix of fun, while building on it to create a fun, frenetic combat system.

The Kingdom Hearts II drop-down menu is combined with BbS’s Shotlock commands and 3D’s Flowmotion (both heavily rebalanced from their original games), and the transition from a Shotlock to magic to Flowmotion is smooth and quick. Added to the mix are Keyblade transformations – after a certain number of melee attacks, a Reaction Command will pop to change the Keyblade in another form usually a different melee weapon. 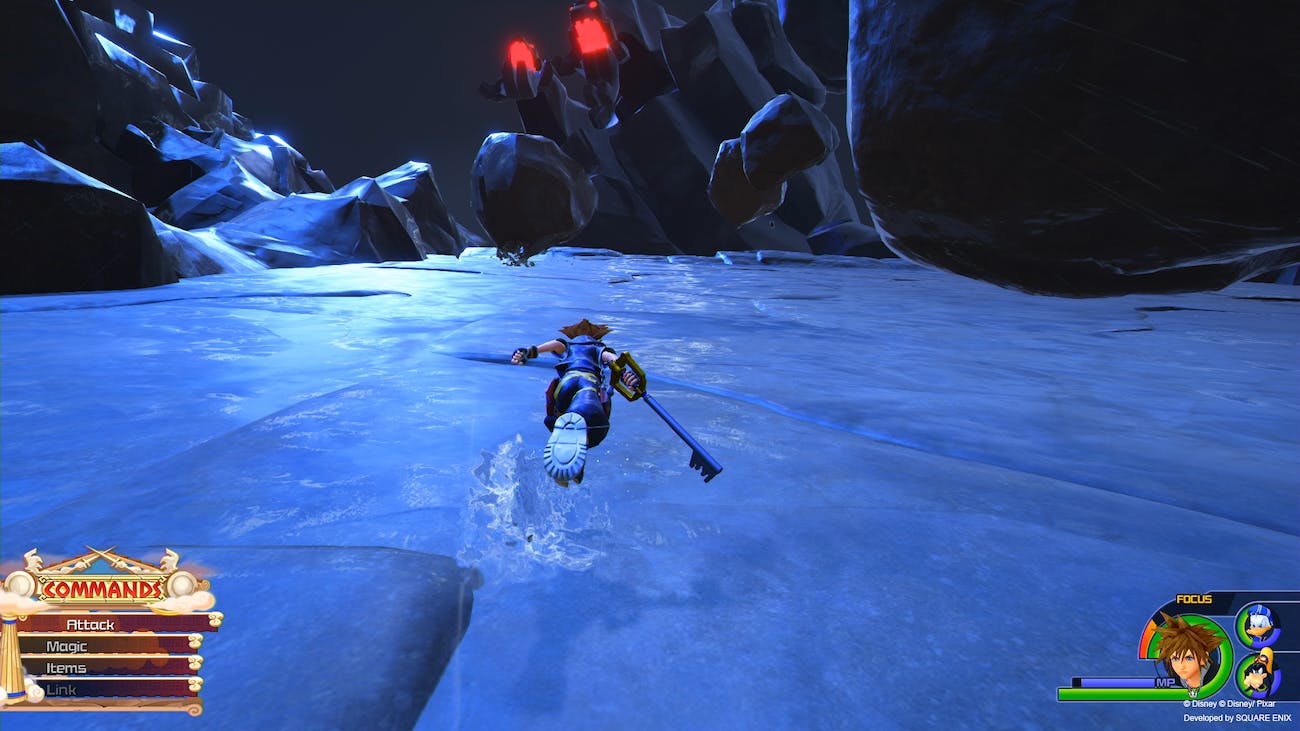 This sort of ability was hinted at in BbS with the trio’s air gliders when they went into their knockoff Kamen Rider armour, and it is brought full circle here.

Each Keyblade has a different form; Frozen’s turns into a staff that can leave behind copies of Sora after dodging that can use magic alongside him, Winnie the Pooh’s turn into honey blasters (just roll with it) that can further transform into a hand cannon. My personal favourite was the Toy Story Keyblade’s hammer/drill mode, aka “I win.”

Each transformation completely changes Sora’s fighting style and can quickly turn the tide of battle. As well as that, a Keyblade upgrade system similar to that of Unchained is introduced, allowing the Keyblade to be upgraded.

This is a welcome introduction, as when a new Keyblade was obtained in previous games the previous one was rendered redundant.

A messy, confusing story with excellent gameplay and moments that, individually, made me well up and feel for these characters.

But, and this is a big but, for the climax of this part of the Kingdom Hearts franchise, it is narratively weak, and very short even before skipping cutscenes.

I clocked in at just under 29 hours, less than double my time with Kingdom Hearts II. Overall, I can recommend it if you’re a long-term fan of the series or of Disney or Final Fantasy for the closure, but little else I’m afraid.