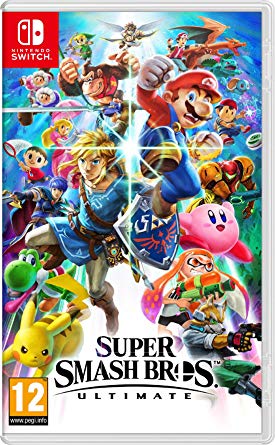 I don’t think I can forget the announcement of this game.

A group of us all live streaming the Direct, “Everyone Is Here” came up…My ears are still ringing.

Every single fighter from the last four games, plus newcomers from Animal Crossing, Castlevania, RIDLEY, what else would anyone with a Switch need?

And all within the year?

2018 suddenly looked up for gaming.

And while it must be said that “Ultimate,” and indeed Smash Bros, in general, has a particular fanbase, that fanbase has been satisfied by this latest entry, but there are some complaints to be made from an objective standpoint.

What was once Nintendo saying “let’s see what happens when Samus Aran has to fight Pikachu” has expanded to include many 3rd party characters such as Mega Man, Solid Snake (especially admirable given Konami’s recent….ventures) and Bayonetta? Totally, family-friendly … Bayonetta.

Newcomers to the series include Simon and Richter Belmont (Castlevania), Ken Masters (Street Fighter) and Nintendo’s own Ridley (Metroid) and Isabelle (Animal Crossing) and more.

As well as that, some characters were added to be moveset clones of other characters, such as Princess Daisy (Super Mario Bros.) and Chrom (Fire Emblem Awakening), being clones of Princess Peach and Roy respectively.

With these newly dubbed “Echo Fighters,” some older characters who were essentially Echoes before the term existed, such as Dark Pit (Kid Icarus) were retroactively made into Echo Fighters. A menu option can combine Echo Fighters with the original user in the choose character menu, significantly de-cluttering it, a welcome change.

As well as the newcomers and Echo Fighters, five confirmed characters will be available as DLC, and if the first two are any indication, they will be extremely varied in origin. The first being the Piranha Plant (Super Mario Bros.), an amusing choice if nothing else, but the second is far more interesting.

Now, for that story mode.

“World of Light” features Kirby going around a map saving other fighters that, when collected, can be used to fight.

But there are only 70 or so fighters, so padding comes in the form of Spirits, which are ridiculously broad in scope. Spirits are essentially those characters who didn’t quite make the roster and needed a consolation prize.

They can adjust a fighter’s power, let them start with an item, allow them to begin with extra stamina, etc. To give just a flavour of who the Spirits are, there’s Shovel Knight, Dr. Kawashima (the Brain Training guy), Shantae, and many MANY more. However, the padding is where I find the story mode’s weakness.

It is not something that is intended to be plowed through in an afternoon.

As well as that, compared to the cinematic and deep story of Subspace Emissary, the World of Light is extremely bare bones, and the story is very safe and generic.

Overall, as Super Smash Bros. games go, it is undoubtedly the most ambitious, and it succeeds in this capacity.

The number of characters, stages, 800+ music tracks (remixes of music from the represented franchises mostly, but even still) and all on a handheld console.

However, the Nintendo holding pattern is still blatantly obvious, and to call it a must buy is difficult.