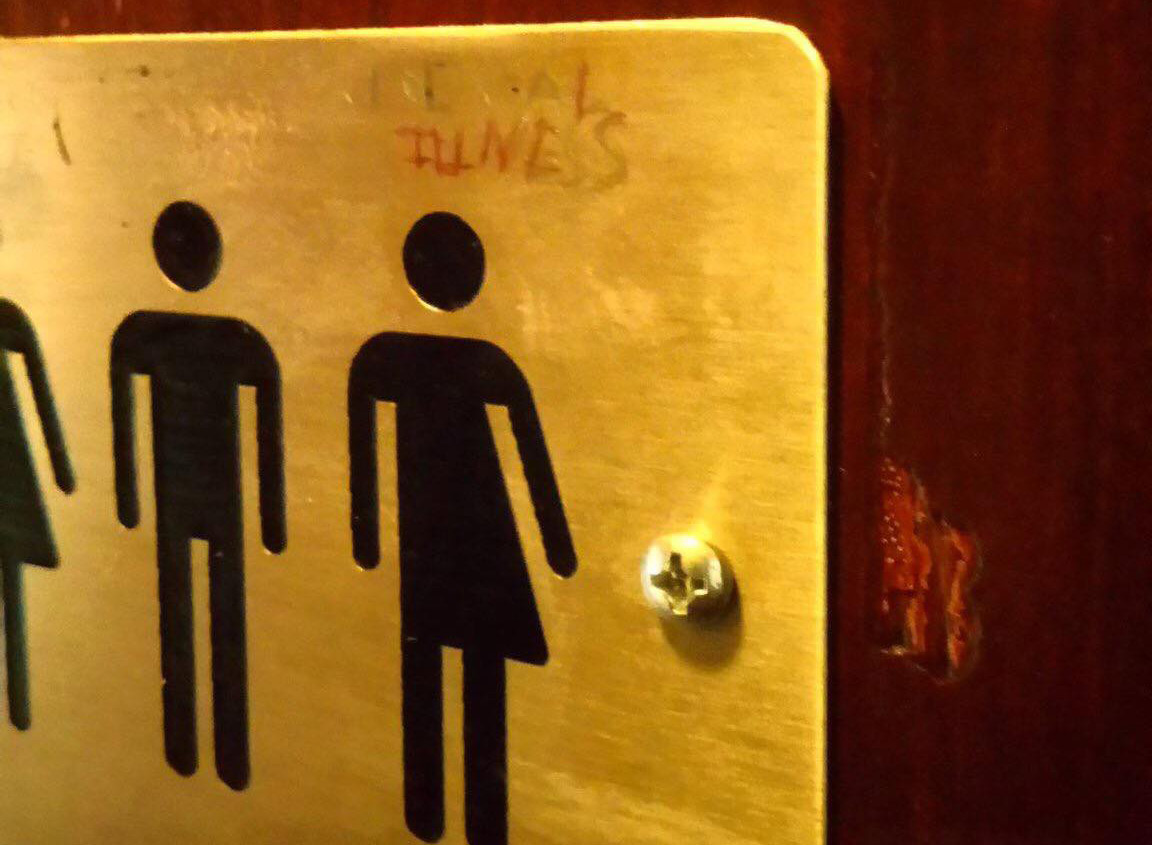 The photo appears to show the words ‘mental illness’ scrawled over an image supposed to represent a non-cisgender person.

Renée Yoxon, who posted the tweet, said there was also graffiti in the stalls that read: “There are only two genders.”

Renée said their reaction to the graffiti was that of “resignation.”

“This type of comment online is not new so I’m used to laughing it off but I’m still trying to decide how safe it is to use these washrooms regularly if there’s evidence of bigotry being physically in those spaces.”

Renée identified some issues  non-binary UL students face such as not being able to sign up for clubs and societies without choosing a binary gender.

“Also while I was able to apply with my preferred honorific (Mx. Yoxon) there are still places in the application and tuition payment process where I’m being misgendered,” they said.

However, the international MA in Songwriting student was eager to assert that the UL staff they have interacted with so far have been “absolute treasures” and have treated them with “nothing but respect.”

Alena Kiel is a second year PhD student and tutor in the department of English, Irish and Communications.

They have been developing several projects with Student Life to improve official/administrative understanding of and accommodations for transgender students and staff.

This is unacceptable and a hate crime. I demand to know what @UL and @UL_StudentLife are going to do about it to keep me and my fellow trans students and staff safe. https://t.co/QAgGv73tLL

“It is a little bit of a shock, honestly,” Alena said, responding to the graffiti.

“Nobody wants to believe someone in real life feels such strong hatred against trans people that they’d do this. Especially in UL, which has been making some pretty good efforts to be inclusive specifically toward trans students and staff lately.”

“It’s hard not to take it personally and feel unsafe when something like this happens,” they said.

“Incidents like this are incredibly damaging to the trans communities on campus because they make people afraid. This sends a message that UL is not a safe space for transgender students to be “out”.”

“It makes me, personally, and I’m sure a number of folks would feel the same, afraid of what students and staff on campus really think about me, and afraid that if someone felt strongly enough to carve that graffiti into a metal plate, that they’d certainly feel strongly enough to attempt to harass or attack me.”

Alena said the lack of a public statement from UL so far is “very condemning.”

“We need a prompt response in these situations, and we need a way of holding whoever did this accountable to ensure this doesn’t happen again” they said.

Alena said a statement along the lines of “We’re aware what happened, it’s inappropriate, and we’re committed to ensuring this won’t happen again because we stand behind our trans students and staff” would be appropriate in this instance.

They also suggested people should be more aware of how to report hate crimes or discrimination to the university.

“When I went to report this, I didn’t actually know the protocol and had to contact a sympathetic person in HR who could guide me through the process,” they explained.

“Another thing that I think is incredibly important is education: if we can offer,  for example, LGBTQI+ or trans 101 type trainings for all students and staff, we can address and eliminate any misconceptions, misunderstandings and, ideally, harmful assumptions that people have against LGBTQI+ and specifically trans communities.”

“I recognise that this is a somewhat idealistic view but, in my experience, education is empowerment, and maybe we can make some positive difference in people’s attitudes with something as simple as trainings or info sessions.”

In a statement, a spokesperson for UL told An Focal;

“University of Limerick is currently addressing a complaint in relation to an act of vandalism to the signage on one of the campus’ 14 gender neutral bathroom facilities. The sign has been removed and will be repaired and replaced.”

The University emphasised the huge commitment by UL management to ensure the University “is a place of absolute inclusivity” with many new measures taken over the past number of years to achieve this, including the establishment of the gender neutral bathroom facilities.

In a statement issued to An Focal, Deputy President and Student Welfare Officer of UL Student Life Lorcan O’ Donnell called the incident “a cowardly act of transphobia,” adding that it was in complete opposition “to all that UL Student Life stand for in [their] constant effort to champion equality and diversity.

“Ensuring trans members of our UL community feel safe and supported is a common goal for both UL and UL Student Life. This is demonstrated by our continued efforts to get university staff trained in supporting transgender students, and our current objective to publish a gender expression and identity policy that specifically states that this kind of transphobic harassment and discrimination will be dealt with accordingly.”

“To our trans and non-binary students and staff, know that this incident does not reflect the view of our university community. It is horrible to see that the facilities that are intended to make your lives easier are being used against you. UL Student Life stands with you.”

For anyone that has been affected, or has information regarding the incident, please contact: