Molly Cantwell gets the scoop on one of the first post-pandemic music festivals in Ireland this month. 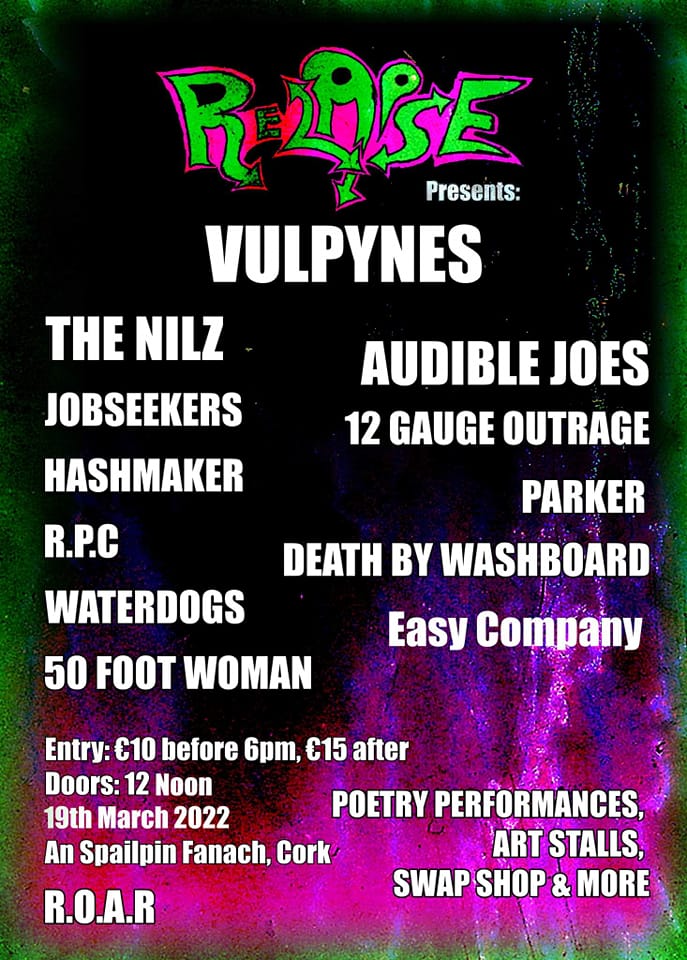 Two years since the beginning of the pandemic, the Irish music industry is finally starting to get back on its feet.

Aaron Griffin, Ciara Hayes, and Jim Spillane are a group of musicians focused on showcasing the best that Irish music has to offer in the form of Relapse Promotions.

The group is coming to the end of preparations for the Relapse Festival, taking place on March 19th in An Spailpín Fánach in Cork City.

Relapse Festival, a reincarnation of the pre-covid Overdose Festival, is the beginning of a series of festivals and gigs run by the new promotion company.

“I’m excited about us getting the chance to put on a festival and getting to see everyone play again,” Limerick native Aaron Griffin said.

He added, “everyone’s been missing gigs, I have as well, so I’m really excited about the opportunity to put on an event for people, have a bit of craic and get back the things we’ve missed from gigs”.

The Dublin duo, Vulpynes, will headline the festival, along with notable performances from The Nilz, Audible Joe’s, Hashmaker, Waterdogs, and 50 Foot Woman.

50 Foot Woman are a young punk band from Limerick who formed over lockdown, making Relapse their first out-of-county gig.

Discussing the new group, Aaron said, “I was interested to see what young punks in Limerick were up to coming out of the pandemic-punk music is usually reactionary to your environment, so it’s interesting to see what they’re doing with it.”

“Being from Limerick, I wanted to promote punk music in Limerick, so putting them on to the set was a no-brainer,” he added.

Waterdogs are another band making their debut at Relapse.

The band features festival organisers Aaron Griffin on guitar and Ciara Hayes on bass, along with lead vocalist Gearoid Relihan.

“Obviously, we would’ve loved to have played gigs earlier, but with restrictions we couldn’t,” front man Relihan commented. “We’re at a place now where we’re really comfortable with what we’re doing. “

The Waterdogs singer added: “Relapse is not just a gig, there’s so much more going on, it’s an experience, and to have that as our first gig is so exciting.”

During the festival, there will be much more than music to feast on that poetry and art lovers can avail of.

“There’ll be art stalls, poetry, and a swap-shop on the day,” Mr Griffin stated.

Tickets are currently on pre-sale on Eventbrite and are flying out quickly.

Relapse Promotions can be found on Facebook and Instagram at @relapsepromotionsirl and can be contacted for bookings or enquiries through RelapsePromotionsIRL@gmail.com.