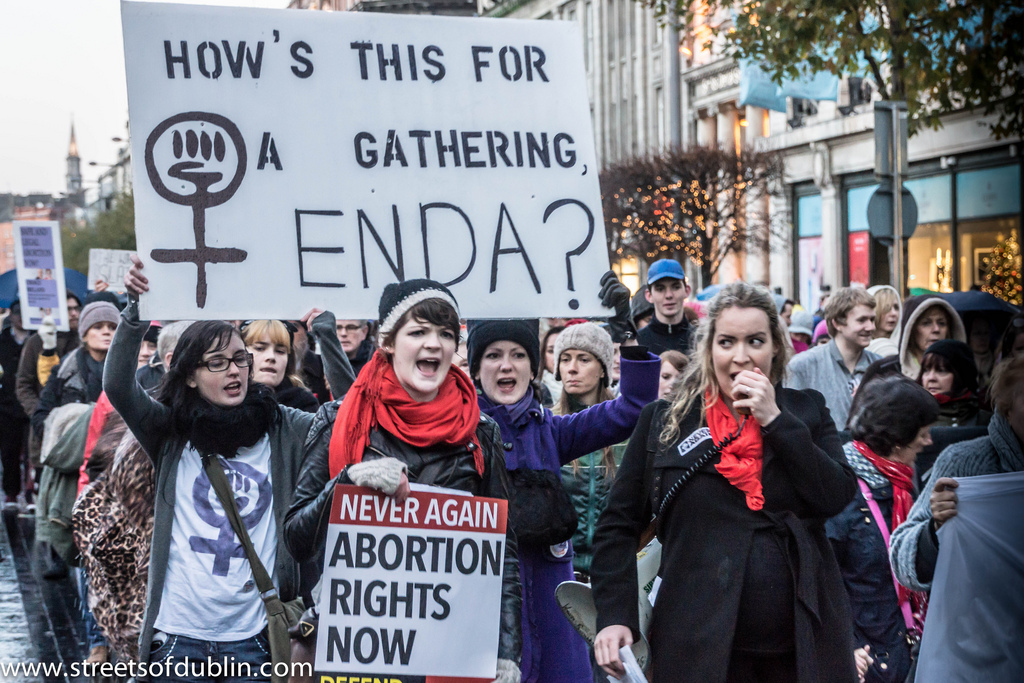 Unless you’ve been hiding under a rock or have just arisen from a coma then you’ll have heard the news about Ireland holding a referendum on abortion this summer. As the news was announced, protests by pro-life campaigners were organised using emotive placards featuring children with Down Syndrome and medically inaccurate photos of late term abortions.

In some instances, red paint was thrown over pro-choice campaigners. In 2013, a white cross covered with red paint was placed in front of TD Heather Humphries home after she announced her Pro-choice views. Although these tactics aren’t reflective of all pro-life individuals as a whole, they do reflect the anger that some people feel in regard to the possibility of Ireland loosening its’ abortion laws. 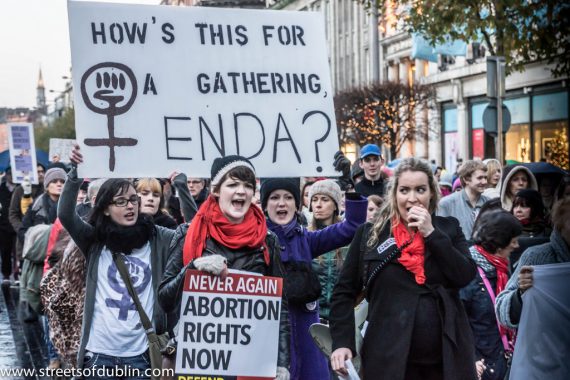 Most countries in the EU have legislation allowing for early abortion on request, and permitting terminations in certain circumstances beyond that. 25 of 28 EU member states have made it lawful for women to access abortion “either on a woman’s request, without restriction as to reason or for reasons of distress, or on broad socioeconomic or psychological grounds, at least in early pregnancy.

That being said, these European countries still experienced similar backlash when they first introduced their own abortion laws.

The UK has come a long way from abortion being illegal to it now being carried up until 24 weeks. Back in the late 1920s/early 1930s fifteen percent of maternal deaths were due to illegal abortion. In the fifties, support for reform grew. During the 1960s, fertility control became more widespread with the growth of the women’s movement and availability of the contraceptive pill. However, illegal abortion was still killing, or ruining the health of many women.

Eventually abortion was legalised in 1967 under the Abortion Act. In response to this, the Society for the Protection of Unborn Children was formed to “uphold the principle of respect for human life, in particular the life of the unborn child” at the time. It was the first such organization in the world.

In 1974, the Abortion Act was threatened by James White’s private member’s bill, sponsored by an anti-choice organisation. Whilst the Abortion Law Reform Association, ALRA, and others made more formal representations, women’s groups organised demonstrations and meetings, many brandishing wire coat-hangers, symbolic of dangerous back-street abortion methods. The campaign led to the formation of the National Abortion Campaign (NAC) in 1975.

In 1990, the Human Fertilisation and Embryology Act introduced controls over new techniques which had been developed to help infertile couples and to monitor experiments on embryos. Despite attempts to use this law to restrict abortion rights, the 1990 Act lowered the legal time limit from 28 to 24 weeks, which is the currently accepted point of viability. It also clarified the circumstances under which abortion could be obtained at a later stage.

It should be noted that abortions can be carried out in England, Scotland and Wales but not Northern Ireland.

Countries across Europe aren’t as liberal as parts of the UK when it comes to abortion. The period limit for an abortion on request can vary from 10 weeks from the woman’s last menstrual period, in countries such as Slovenia and Croatia, to 18 weeks in Sweden.

Abortion legislation in Spain has a varied history. During the 1930s, abortion law was liberalized in parts of Spain, but this was short-lived, as the Franco regime – a Christian conservative government – outlawed abortion again. The laws were relaxed in 1985, and were further liberalized in 2010.

Over one million demonstrators took part in a march in Madrid in October 2009 to protest plans by the government of José Luis Zapatero to legalize elective abortions and eliminate parental consent restrictions. The following year, over one million Spaniards signed a petition against the liberal abortion policy of the government. The petition was launched by the organizations “Derecho a vivir” (right to life) and “Hazteoir” (make yourself heard).

Abortion in Poland is illegal except in cases of rape, when the woman’s life is in jeopardy, or if the fetus is irreparably damaged. In 2016, with proposed legislation to completely outlaw abortion, 30,000 women went on strike and marched in cities across the country to protest their further loss of reproductive rights, leading high-ranking politicians to distance themselves from the proposed law. Just three days after the strike, lawmakers voted against the new law.

Poland is one of the few countries in the world to outlaw abortion after decades of complete legalisation (during Communist rule). Polish women often seek abortion in neighbouring countries due to the strict restraints in their own country, much like Irish women.

As you can see, abortion continues to be a divisive subject, not just here in the emerald isle, but across the continent of Europe. It should be expected however, that people must be given time to change their views and so that everyone can have a reasoned conversation on this contentious issue.