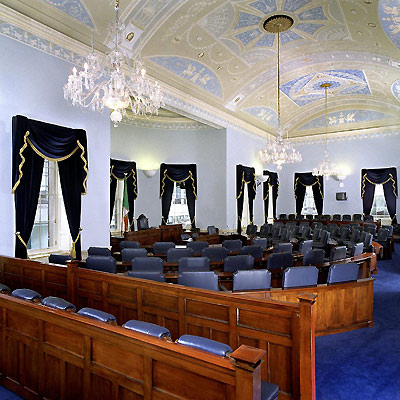 This year’s upcoming Seanad elections will allow the graduates of Trinity College, UCD, NUIG, NUIM and UCC to cast their vote on who should gain the six Seanad seats allowed to represent graduates of third level education in Ireland. However graduates of major institutions such as UL and DCU, not to mention all of the IT’s around the country, remain ineligible to vote.

Following this year’s General Election, and within 90 days of the dissolution of Dáil Éireann, there will be another election to decide the membership of the 25th Seanad. Expected to take place in early June, the Seanad elections will decide the 60 senators that will make up the upper house for the next five years.

Of these 60 seats; 11 are nominees of the recently elected (or re-elected) Taoiseach; 43 are elected by the sitting TDs, local government councillors and outgoing senators; and six are elected by the graduates from the constitute institutions of the National University of Ireland and Trinity College Dublin, split 3 apiece. The current Seanad’s six university representatives being: NUI Senators Feargal Quinn, Rónán Mullen and John Crown, and Trinity College Senators David Norris, Ivana Bacik and Seán Barrett.

This state of affairs has been the case since the introduction of the Constitution of Ireland in 1937 despite numerous calls for change from politicians, the public and advocacy groups, such as Graduate Equality, alike. There was in fact a referendum in August 1979 which despite a low turnout (around 28%) was passed with over 90% in favour. This led to the introduction of the Seventh Amendment of the Constitution (Election of Members of Seanad Éireann by Institutions of Higher Education) Act, 1979. This amendment, quoting from the official text of Bunreacht na hÉireann, “Allowed the State to extend the provisions for the election of members of Seanad Éireann by certain universities to other institutions of higher education in the State”. However this was never enacted by the government of the day, nor any of those to have held power subsequently, despite the mandate to do so.

The result of this is that there is no voice for over half of graduates from third level education to elect representatives that are supposed to represent them despite a thirty-six year old mandate for government to allow them this right. Instead circa 150,000 NUI graduates, and only 50,000 of their Trinity College counterparts, will elect the 6 senators whom will represent graduates over the next 5 years.

Under the current coalition’s programme for government there was a motion to abolish the Seanad which was narrowly defeated (51.87% against) by the people through referendum on 4th October 2013. The popular consensus being that rather than abolition there would instead be reform, although there is of course the possibility of a certain amount of the vote against being protest votes against a government with falling popularity.

However as it stands the Seanad Bill 2015, which is currently being debated through the houses of the Oireachtas, is the summation of these calls for reform and it includes provision for the extension of Seanad voting to “all graduates of third level education in Ireland”. This bill was submitted by a Seanad working group in May last but Taoiseach Enda Kenny has recently said it will not be passed by the Dáil before the upcoming general election.

There is a feeling amongst those opposed to the bill that it does not offer ‘true’ reform, but is merely a platitude towards those that are seeking changes that will make the upper house more relevant. One of these, Senator David Norris, a Trinity College seat holder, who, whilst speaking in a Seanad debate on the 2015 bill, argued: “The Bill goes a small way towards rectifying an idiotic situation” and that the current proposal “would magnify the existing disparity”, in terms of the democratic deficit showcased by 200,000 electing six representatives whilst the Taoiseach alone elects 11. Senator Norris did however go on to say he would vote in favour of the bill, should the occasion arise, “because it is some token gesture towards Seanad reform”.

In all there is a fear that this talk of reform could be lost in the confusion around a general election. Indeed should the government fail to be returned to office then the future of this bill is even less certain. Either way for the next five years the majority of Ireland’s third level graduates will remain without representation in the Seanad.