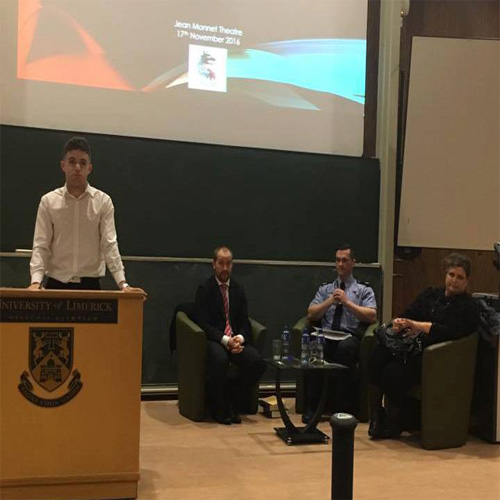 The seminar featured two barristers and a member of An Garda Síochána speaking about the laws surrounding self-defence.

The seminar informed students on how to defend themselves not only from attack, but from the law too.
Barrister Angela Liddy advised people to run if in a potential dangerous situation, but if people have no choice but to defend, they should use reasonable force.

If a martial artist caused serious harm they would find themselves in court, she explained.
“There is no valid defence for excessive force,” she said.

The barrister took into consideration that people cannot be expected to calculate how much force to use in the heat of moment, but to consider appropriate use of force by direct comparison to the threat.

“The fact that you have the skill set to defend yourself is wonderful but don’t take it too far.”

Barrister Jack Nicholas said that there is an impulse for people who know how to defend themselves to do so.

As the threshold for assault is low, he said that “you can get sucked into the legal system quickly because the other guy lies.”

Garda Barry O’Farrell said that as the Gardaí can’t be everywhere all the time, in certain circumstances people have no choice but to take the law into their own hands.

However, he said that people end up in court if someone tries to rob them and they respond by hitting them.

The person could end up in the circuit court or the DPP for more serious incidents, he said.