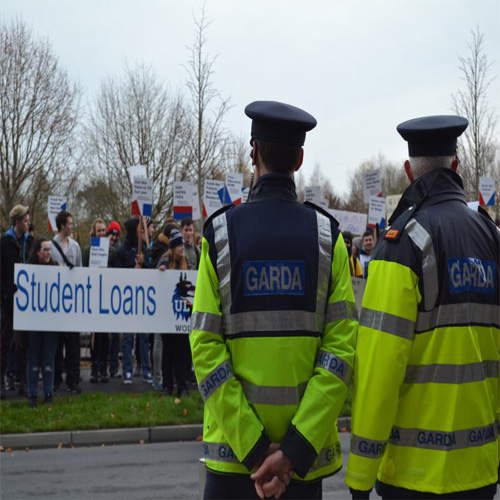 Over one hundred UL students turned out to protest against third level fees as Enda Kenny launched the €86 million Bernal Institute.

The protesters were comprised of students from a variety of the universities societies such as Out in UL, Sinn Féin society, Social Democrats and many students who joined the protest as it marched across the campus.

The protest was organised by the UL Student Council in response to the Governments Cassell’s report which outlined the option of a student loan scheme to fund student’s third level education.

UL Experience Group chairperson and one of the organisers of the protest, Chris Collins said: “Since Fine Gael entered office, student fees have gone up 100 per cent.

“The Cassell’s report gave three options to the government and one option is a loan scheme, which is what the Fine Gael government are favouring and we protested simply because this is not the right option for students.”

The march started on the north side of campus, where the crowd crossed the Living Bridge and the Students Union (SU) courtyard before stopping outside the Analog Devices building to sing a few of their songs and homemade chants.

Chants such as: “Not a penny, Enda Kenny,” “No way we won’t pay,” “Education is a right not a privilege,” and “You can stick your loan scheme up your arse,” rang across campus.

ULSU Academic Officer Donal Foley presented a letter to Taoiseach Kenny on behalf of the students of UL and briefly chatted to the Fine Gael leader.

Mr Foley said: “Enda asked would I pay a higher rate of income tax to have college publicly funded and I said that I would have no problem with that.”

Officer Foley would like to see a rise in Corporation Tax and Income Tax in order to have third level education free for all students.

“With this system people would see that they got their education for free and they will pay a higher rate of income tax for the rest of their lives and the option that the government is proposing, we might end up with a big massive hole of debt,” he added.

Mr Foley likened the situation in Ireland to that of Australia who has a similar loan scheme in place.

Australia’s student debt is projected to be $185 billion by the year 2025 and Officer Foley labeled their situation “a ticking time bomb.”

The UL student Council is hoping this will inspire other universities in Ireland to come together and protest the student loan scheme.