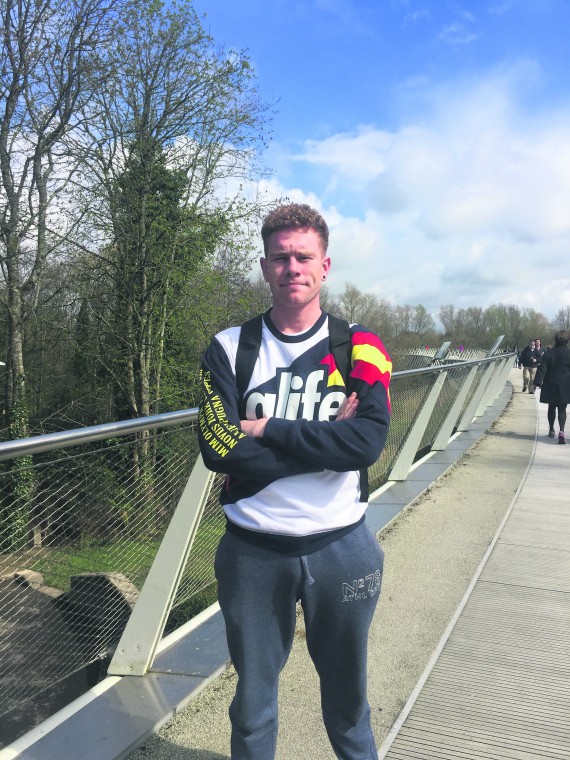 It’s a Monday evening in Castletroy and Michael hears a knock at the door. For the third time this semester his landlord has arrived for an unannounced inspection of the house. Michael lets him in, simply because he can’t physically stop him. He is 90 per cent sure it’s against the law for him to arrive like this and before he can type the question into the Google search bar on his phone the landlord has noticed a stain on the couch and is threatening a fine.

It’s an age-old debate: Students ‘vs’ landlords. But who is right? Do the students damage the properties or do the landlords take advantage of their power? I investigated both sides of the argument to see what can be done to avoid the seasonal spat between both parties when the houses are inspected and the deposits are returned.

Meet Brendan, who’s landlord claimed they hadn’t looked after the garden properly and tried to charge them just under €5,000 in expenses which they refused to pay.

“He was charging us for not cutting the trees at the front of the house. We decided not to pay and never heard from him again, he was just chancing his arm. Looking back on it, it was ridiculous that we paid €320 a month. The house wasn’t in good enough condition to be paying that price. It was our first time living off campus and we just thought all of the houses must be like this,” he said.

Rewind to late August/early September and the excitement of the reunion with your friends is all that you can focus on as you return to college. Bags are packed, cars are stuffed and the summer is officially over. But not to worry, Fresher’s Week is about to commence. You meet your landlord, grab the keys and quickly run up the stairs to mark your territory in the best bedroom in the house. The landlord leaves and you begin your semester.

But what happens when the shower is leaking and the bins haven’t been collected in six weeks? You discover that the leg on your desk is broken just as you begin to study for mid-terms and the walls that were only slightly damp at the beginning are now notably worse. Have you gotten the correct contact details of your landlord? Did you check all of the broken items and report them to your landlord when you moved in? Had any of your housemates gotten a receipt for the deposit and did you even bother to read or keep a copy of your contract? Practices like these seem to be how students often get themselves into difficult situations. Students simply aren’t aware of their rights and studies show they don’t always know where to go to for help.

Solicitor, Pat McDermott encouraged students to find out as much as possible about your landlord before signing anything. “Knowing your landlord is the best avenue to avoid a dispute. Doing Background checks such as enquiries with recent tenants can reveal illicit information about a landlord,” he stated.

Back to student teacher Michael, he and his housemates were charged €50 to clean their cooker. When I looked further into the price of cooker cleaning apparatus I found it difficult to get my hands on something for that price. According to local Tesco’s, Dunnes Stores and Super Valu’s a bottle of ‘Cif’ or ‘Mr Muscle Cooker Cleaner’ costs €4 or €5 per bottle of 500ml. Now unless this landlord had to buy two bottles per tenants’ damage, and ten in total, it would appear this landlord is charging too much. The same landlord refused to show receipts for any of the repairs he listed in an e-mail to them.

University of Limerick students are most definitely calling out for rental regulations or some form of aid to censor landlord’s credibility. In a survey of 100 students in UL 75 per cent said they had felt that a landlord exploited them and the lack of deposit return was the main reason. A number of students in UL were in favour of the introduction of a government initiative that would tell them the ‘need to know’ rights through a website or some sort of infographic that could be done in collaboration with the Union of Students in Ireland or each university’s students’ union.

“We don’t learn anything about being a tenant at school and when we get to college its so overwhelming. Once you have a bed you don’t have time to think about taking photographs or inventing your own inventory. A system that would help you and remind you to do these things would hugely benefit students,” Tara Kelly, a second year business student explained. Students simply want somewhere to go where they can find out all of their rights and obligations as tenants in a clear and concise manner.

But the problem is spiraling out of control and it seems that if relations between students and landlords are not improved students may be driven away from third level education. However, acting Minister for the Environment, Community and Local Government Alan Kelly has said: “Under the new laws which I introduced before Christmas, tenants have substantially better rights when dealing with their landlord than they did before.”

Some University of Limerick students this year were forced to find accommodation in County Tipperary and commute each day. General Manager at The Abbey Court Hotel in Nenagh heard through word of mouth about the difficulties students have encountered.

“We saw a gap in the market and we went for it,” he said. “It’s €500 per room per month with TV, Wi-Fi, heating and electricity included in that. A limitless pass for JJ Kavanagh & Sons bus which goes to and from the University of Limerick campus multiple times daily is also included. The student guests have full use of our gym and leisure centre too and they seem to really be enjoying their stay here,” he added.

Nenagh, which is a forty-minute drive to the University of Limerick has become a satellite town of sorts to the University and students there seem “content and enjoying seeing another historic town in Ireland,” Mr. Muller added.

But how can we avoid these issues? Will the unfair treatment of students and the lack of accommodation available turn our scholars away? What can be done to help these students or more importantly what can these students do to help themselves?