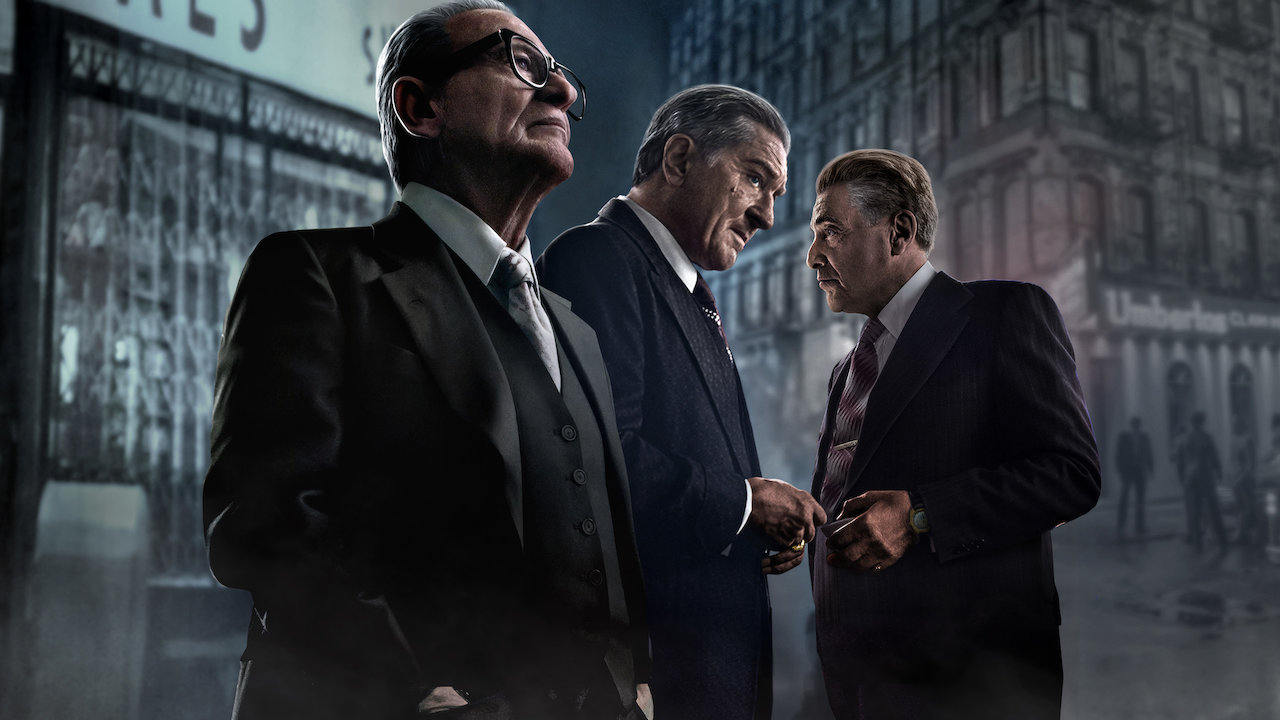 If you’re reading this review and weighing up whether to watch The Irishman, what are you still doing here?

Go watch it, and come back to this review.

Leave it open in another tab.

The mid-budget film has died a death, superhero films are more popular than ever, and the New Hollywood era is struggling to find a foothold in the modern climate.

He took 160 million dollars of Netflix’s money and turned out what might well be his finest film in 20 years.

After cowardly audiences stayed away from Silence, Scorcese returned to the genre he helped define: the gangster film.

Much like how season 3 of Twin Peaks was David Lynch wrestling with the legacy he created for himself, The Irishman is Martin Scorcese staring himself in the mirror and analysing the genre he helped create.

Telling the true story of Frank Sheehan, played by a never-better Robert De Niro, The Irishman is a decades-spanning saga, taking in everything from World War 2, the JFK assassination and the rise and fall of Al Pacino’s Jimmy Hoffa.

De Niro is the anchor of the movie, with the movie employing an ingenious framing device of a wheelchair-bound, retirement home based Sheehan recounting his life and times to the audience, almost like it’s a conference call from here to eternity.

Along the way, he encounters a dynamite Joe Pesci, a “where did he learn to act?” Ray Romano, a charming Bobby Cannavale, and in an extraordinary turn of events, Anna Paquin carrying the movie on her shoulders despite having less than 3 lines of dialogue.

It truly needs to be seen to be believed.

The film cost as much as the average superhero movie because of the liberal amount of CGI de-ageing to make our characters look like they did in their prime – Al Pacino looks nearly identical to his Godfather 3 get-up and De Niro looks like his Casino character – and it’s seamless.

The CGI is a perfect summation of everything The Irishman gets so right; it’s Scorcese’s traditional, old-school sensibilities meeting with leaps in technology and filmmaking.

That is an element that explains why the film works as well as it does, although Steven Zaillian’s diamond-cut screenplay also does a lot of the heavy lifting.

Based on the book I Heard You Paint Houses by Frank Sheehan, the book seems tailor-made for a big-budget Hollywood movie.

The film version could have so easily have fallen into the trap of “well, this was in the book, so we gotta include it for verisimilitude sake” but despite the 3 and a half hour run time, every minute feels earned.

The difference between The Irishman and every other movie could be surmised in one scene.

There’s a scene 45 minutes in, where the characters are in a bowling alley.

Every other director would have left this on the cutting room floor, but this scene gives you some character development, explores the relationship between the characters, and sets up a plot point that will pay off subtly later.

Most films out there would cut that scene because it wants to get to the big and expensive scene they showed in the trailers.

Scorcese is a different kind of director.

He takes the coat and hat off the audience at the front door, invites you to sit down, and sit in his house for a few hours; the master is at work, telling you a great story.

The acting is a sight to behold too.

Robert De Niro hasn’t been this good in years, and it’s nice to see him do a real film again after adding gravitas that wasn’t deserved in Joker, Al Pacino turns in his best performance since The Insider, but the surprise MVP of the movie is Joe Pesci.

Joe Pesci is usually the terrifying little bulldog or blunderbuss who could erupt in the middle of a scene and startle the audience.

Here, Pesci is quiet, pragmatic soul of the movie, driving the plot along, has his own little plotlines, but is the total opposite of what you’d expect from a Pesci role.

Anna Paquin’s character has been the centre of much online discourse, and perhaps indicative of female characters forever being Scorcese’s weak point, but she is the core of the movie.

Anna Paquin is us, the audience, watching the movie, merely observing and a bystander in the chaos around her.

When her lines hit, they hit with the force of a volcano.

It’s maybe the greatest performance ever given by an Oscar winner that has less than 5 lines of dialogue, as overly-narrow as that superlative is.

Mexican cinematographer Rodrigo Prieto and longtime Scorcese editor Thelma Schoonmaker also work their magic behind the scenes, in ways not noticeable to the untrained eye.

The length might be an issue for some people, but to quote the great Roger Ebert “No good movie is too long and no bad movie is short enough.”

After watching The Irishman, you’d wish there was a 7-hour long cut to watch.

The Irishman, as stated, is Scorcese’s thesis statement about the current state of cinema, and explores why we love the gangster movie so much.

He points the mirror at the audience and asks us why are we so fascinated with the glitz and glamour.

It didn’t work in Wolf Of Wall Street; it works here.

The day Martin Scorcese leaves this mortal coil, not only will the art form of cinema be poorer without him; humanity will be too.