The Matrix At 20 – A Cinematic Game-Changer

Cian O’ Broin Takes Us Back in Time to Visit our Future Selves on the 20th Anniversary of The Matrix Trilogy. 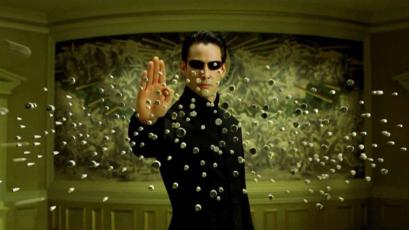 The Matrix At 20 – A Cinematic Game-Changer

The turn of the century took us in a direction we could never have expected. Placed in front of us were two pills: one red and one blue.

We followed Morpheus’ advice and chose to go down that rabbit hole and see what the world had to offer.

What a journey it has been.

Perhaps the Wachowski sisters had seen the Matrix before us.

On the cusp of its twentieth anniversary, we take a look at the iconic trilogy that revolutionised science fiction at a pivotal time in our technological evolution.

Never ‘Scene’ Before:
With the advent of fully autonomous A.I peering at us over the not so distant horizon, we look back at the Matrix with a fondness for such innovative thinking. In a world governed by omnipotent artificial intelligence Neo and the resistance manipulate the internal code of the Matrix, retuning the laws of physics to their advantage.

The iconic image of Neo bending backwards amid a rain of fire from Agent Jones revolutionised action movies over the last two decades.

In the construction of this infamous scene, Lana Wachowski wanted to “push the boundaries of reality.”

Technological inhibitions prevailed, and the Wachowski’s settled for digital effects as opposed to an omniscient camera that could track every single movement.

Deeper Influences:
With an immoderate budget of sixty-three million dollars, the first of the trilogy was a major box office hit – adjusted for inflation, it made 300 million dollars in the United States alone.

Transcending its numerical value, the film incited a wave of philosophical ideals and theories.

One notable public figure, Elon Musk believes in the possibility of our lives mirroring a virtual reality governed by some sort of superintelligence.

A theory spawning from the Matrix trilogy.

Alternative realities inundated movie theatres throughout the ’90s and similarities were drawn between the Matrix and the Truman show at the time despite the Wachowski sisters dismissing any external influence on their masterpiece.

Deeper deconstructions have linked the series to the ‘rabbit hole’ present in Lewis Carrol’s classic tale of Alice’s Adventures in Wonderland.

Extremism?
So profoundly influential was the trilogy at the time that it spawned a new religious movement called ‘matrixism.’

Much like the ‘flat earthers,’ sincere contentions have been made against the authenticity of this movement.

Nevertheless, followers of Matrixism believe in a messianic prophecy, the use of psychedelic drugs, a multi-layered subjective reality as well as an eclectic mix of some of the world’s major religions.

Taking a less compulsive approach, Matrix lovers have created an endless amount of fanfiction in the form of comics, animation, websites and an infinite number of community threads.

What’s Stopping You?
Convincing someone to dive into the trilogy takes little convincing, considering the aura that exists around it.

The films swept the technical awards at the Academy Awards and Baftas the following year, taking home Editing, Visual Effects and Sound awards.

If Inception tickled your fancy, why not give kudos to its oldest relative and indeed a massive inspiration for its storyline.

Phenomenal characterisation is a testament to the series overall success with the unmistakable towering figure of Morpheus donning his neoteric sunglasses that set a longstanding trend.

Toping it all off are the deeply engrained symbolism of the pills, the rabbit hole and the ‘there is no spoon theory’ that sparked a heated debate worldwide. None of these ringing any bells? I guess you’ll have to find out…

The Matrix trilogy will forever be in our hearts as one of the most revolutionary science fiction trilogies to ever grace our screens.

What wouldn’t we give to reconfigure our reality like the resistance?

What if none of this mattered and you’re not really sitting at your computer screen right now. Your life is nothing but a simulation.