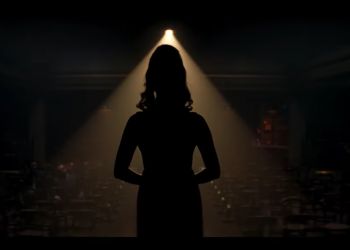 Moving to the big city is meant to be a nerve-racking but thrilling experience. Unfortunately for fashion student Eloise, she might not be ready for quite the amount of frights and thrills in store in this horror thriller from the mind behind the Cornetto trilogy, Edgar Wright.

Thomasin Mackenzie plays Eloise, a talented young designer from Cornwall who gets accepted to the University of the Arts, London in a fashion and design course.

She leaves behind her small town and is immediately a tiny fish in a massive pond full of bigger fish. Her roommate is extremely competitive and nasty, leading to Eloise moving into a bedsit with an old lady landlord.
Initially, she thrives but soon is plagued by night terrors and visions of a young wannabe star from 1960s London being led down a dark path.

Eloise begins to crack as she believes what she’s seeing happened, leading to mental breaks and catastrophic decisions.

Edgar Wright is best known for his Cornetto trilogy starring Simon Pegg and Nick Frost. Baby Driver followed that, showing he could keep his energetic and stylish techniques while telling an engaging story.

He delivers once again with this time-bending thriller set simultaneously in present-day London and some time in the 1960s.

This movie is stylish, fast-paced, and does its job as a horror as well. Ghosts plague Eloise at every turn as she slowly unravels.

Spectres advance upon her in dimly lit libraries, around street corners, and even burst through the walls. While they are ominous at first, the up-close look of these demons may frighten some viewers, so be warned.

The principal cast of Thomasin Mackenzie, Anya Taylor-Joy, Matt Smith, and Michael Ajao is ably assisted by Diana Rigg and Synnove Karlsen.The movie is dedicated to Diana Rigg in the opening credits. The titan of British film and television, unfortunately, passed away before the film could be released.
A special mention must go to Karlsen who plays Eloise’s roommate. She portrayed the jealous and vindictive Jocasta so well that I hated every minute she was on screen. The sign of a great actor.

Is this movie full of brilliant acting? No.

Does this movie have a twist ending that could be guessed with a little bit of thought early on? Yes.

Will it win any awards? No.

But that’s not what you will watch it for.

You will watch it for the story itself, the way Wright blends time and imagination, and the high-speed chases that will leave your heart thumping.

Last Night in Soho is in cinemas around the country now!