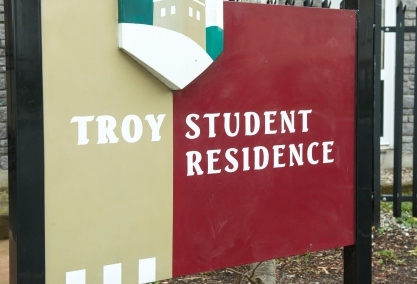 Troy Student Village has been repeatedly damaged by local kids in the past two weeks. Children from the neighbourhood broke the pedestrian gate at the entrance of the student village last Saturday by crashing a bike into it and they also damaged the sensor on the gate last Monday.

Their abusive behaviour is nothing new to the residents and the university staff – they had been offensive and insulting in the past years as well.

“They are a nuisance. The university should be able to deal with it, to provide me and other students with security. And if they won’t, as an American citizen, I will report it to the US embassy,” said one of the students.

Most of the children vandalising the area live in the neighbouring estates and it is very easy for them to hop over the wall and run from security, especially at daytime.

Troy Village Manager Philip King said he could not discuss the topic.

“It is an ongoing investigation with the Gardaí,” he explained.

“We are dealing with it. We brought it to the attention of the community Gardaí and the head of Security in the University. At the minute my staff tenders are trying to speak to them, but they are children, so they won’t listen to us,” Mr King added.

Several students have gone to the reception asking for explanations.

“I hope they are going to solve the problem as quick as possible. These kids are vandals, abusive and terrible for cursing, I am really sick of dealing with them,” said one of the residents.