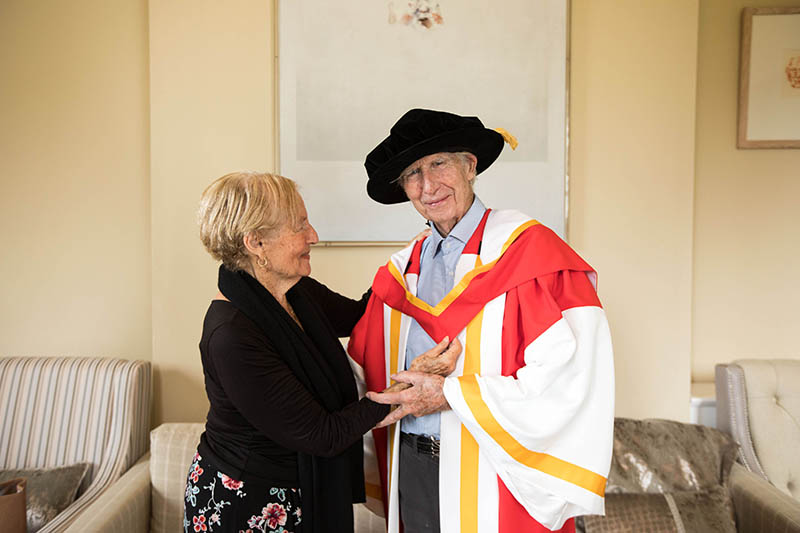 University of Limerick (UL) has conferred artist Brian O’Doherty with an honorary doctorate in recognition of his contribution to national and international art.

An artist, novelist, critic and dramatist of international acclaim, Mr O’Doherty was nominated for a Booker prize for his novel The Deposition of Father McCreevy and his paintings have been acknowledged in five retrospective exhibitions in Washington D.C., New York, Ohio, Derry and Dublin.

A native of County Roscommon, O’Doherty left Ireland in the 1950s after completing his medical degree, making his home in Manhattan where he went on to become a leading figure in the visual and literary arts.

UL’s Dean of Arts, Humanities and Social Sciences, Professor Helen Kelly Holmes, described the conferral as a great honour for University of Limerick.

“The Honorary Doctorate Conferring Ceremony gives us an opportunity to express our values as an institution as well as to bask in the reflected glory of a stellar individual.”

“In this case, it’s hard to imagine a more luminous candidate than Brian O’Doherty.”

“One of Brian’s most distinguishing achievements as an artist has been to break out of his milieu and to wield his art in a meaningful political context” she finished.

In 1972, Brian O’Doherty changed his name to Patrick Ireland, in response to the Bloody Sunday killing of thirteen unarmed citizens of Derry.

Thirty-six years later, following the establishment of power sharing in Northern Ireland, a choreographed ‘funeral’ was held for Patrick Ireland at the Irish Museum of Modern Art.

Professor Holmes says: “We take seriously the political role of the university to inform enlightened policy, to rebalance educational inequality, to defend human rights and to stand up for progressive democracy and relentless inquiry in the face of autocracy and anti-intellectualism.”

“Brian O’Doherty’s fearless exploration of his subject matter over many years provides us with a shot of courage to keep challenging orthodoxy while honouring what the past has taught us,”

The citation, read by UCD’s Professor Eoin O’Brien, stated: “We have before us a doctor, an artist, a writer, a philosopher, a personality who is best described by that much maligned term, polymath, who left Ireland to forge his art in the competitive environment of Manhattan, where he challenged the conventions of modernism to become one of the most respected leaders of postmodernist art.”