“No one watches the show to feel feelings” 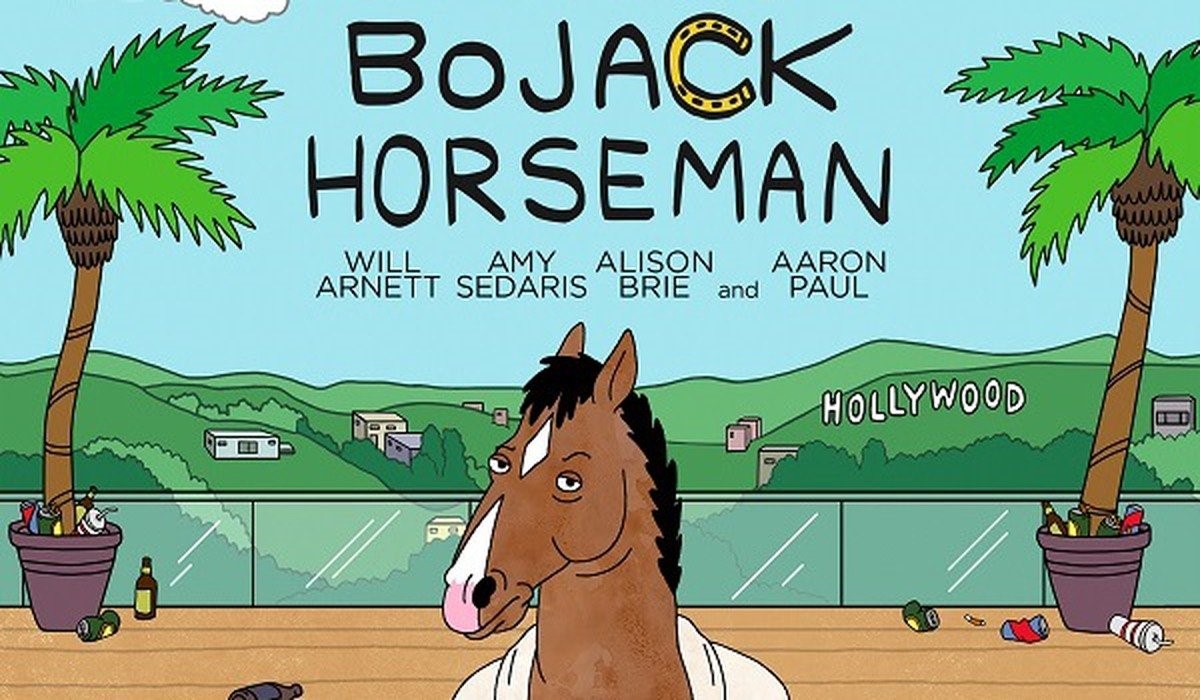 It’s a show about a talking horse that makes me laugh, then cry. I put the show on one evening because I wanted a funny series to help me unwind. The cartoon style by Lisa Hanawait the creator of “Tuca and Bertie” alongside the goofy humour reminded me of “The Simpsons” and “Family Guy”. However, it did not end up being a lighthearted, feel-good show like I anticipated. By the end of the series I was left in tears as the credits rolled. Despite Netflix cancelling the show after the sixth season , it still won countless awards even winning the Critics’ Choice Award for Best Animated Series. It is an adult cartoon series set in Hollywood in a world where animals and humans live side by side. The show centres around BoJack Horseman (Will Arnett) , an alcoholic horse actor who starred in a 90’s sitcom called “Horsin’ Around”. He lives with his best friend Todd Chavez (Aaron Samuels) , an innocent and optimistic character that acts as a foil against BoJack who his self-deprecating and grouchy. Princess Carolyn (Amy Sedaris) is both BoJack’s agent and ex-girlfriend which makes for an interesting relationship. She is an extremely work driven , pink cat and does her best to try and improve his career. In the pilot, BoJack decides to write a book as his comeback into stardom and hires Diane Nguyen as his ghost-writer. Their relationship takes a turn when BoJack learns she is dating Mr. Peanut Butter (Paul F. Tompkins) a friendly, yellow labrador who happens to be his rival. The characters get involved in strange antics such as Todd being held hostage on a ship, to Mr Peanut butter running for Governor. Although it sounds wacky and nonsensical the writers do an amazing job of making it feel natural.

The plot however creeps up on you as you watch the show. On the surface it’s about BoJack trying to develop his acting career, Diane trying to become a writer and Princess Carolyn dealing with eccentric clients. It becomes more about these characters dealing with life. in a world where animal jokes run rapid. Like Mr Peanut butters’ hatred for the postman to Diane being the black sheep in the family despite her brother literally being a black sheep. However, it mainly deals with BoJack’s self-destructive behaviour that hurts himself, and the people around him. 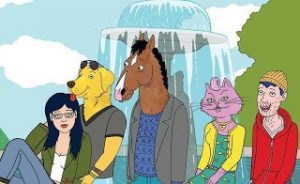 Hanawait alongside her high school friend Raphael Bob-Waksberg created the show. Bob-Waksberg came up with the idea after moving to LA and living in a house overlooking the Hollywood sign. This became the idea for BoJack’s home. The show’s star an exemplary cast that truly immerse themselves in the characters and bring them to life in a way that is relatable and credible. The show has an amazing list of special guests from Daniel Radcliffe, Lisa Kudrow, Lin-Manual Miranda, and Dave Franco. It even has a catchy theme song by Grouplove. The first half of season one is generally seen as the weakest of the series due to the worldbuilding and character establishment, but it was required for the show’s success in later episodes. The second half of the season is when the show begins to shine and shows its true colours. You realise that there is something darker and deeper happening under the quirky visuals. Bob-Waksberg makes a statement about political correctness through the show and feels as maker of media , no subject should be off-limits. Taboo topics are dealt with in an honest manner that is so unique to other series on tv at the moment. Areas of depression, addiction, alcoholism , suicide, abortion and trauma are dealt with- and not glamourized or sugar-coated like other shows have in order for the audience to swallow them easier. It is unfiltered and unafraid. What also makes this show so refreshing is the contrast of the visuals and humour against the serious matters. The creator wanted to tell “sad stories without sacrificing humour.”

The show’s writing is yet another reason why this show is must watch. There are so many quotable and memorable lines that are relevant to any area of life. From the hilariously bad script from Mr Peanut butter’s show “Birthday Dad” to the lyrics of Sarah Lynn’s song “ Don’t stop Dancing “ displaying the harsh effects of childhood stardom. There are recurring several alliteration jokes throughout the show where tongue-twisting and ridiculous names are constantly repeated, especially by Princess Carolyn who deal with lots of different clients and tv projects such as “Zach Braff Short Stack Breakfast Attack at Shake Snack.” Try saying that ten times fast. The well-balanced writing manages to incorporate humorous animal puns and hard-hitting lines. Wanda delivers one of the show’s most memorable lines about loving someone only to see their bad sides when it’s too late stating that  “Through rose-coloured glasses all the red flags just look like flags”. The shows unbelievable writing shines through in the episode “Free Churro”. BoJack delivers a monologue that lasts the entire episode. It is heart breaking and flows beautifully in a way that leaves you wishing the episode were longer. The shows writing skills are most evident in the episode “The View from Halfway down” in a which  a poem by the same name perfectly in captures BoJack’s emotions. He feels too far gone and cannot be saved from himself even though his problems are fixable and thinks “before I leaped,  I wish I had seen the view from halfway down.” This mix of witty and haunting writing is consistent throughout the show.

Although the cast, writing, animation, the honest approach to heavy topics and the humour all make this show a must see, it is the shows lessons that make it so powerful and compelling. The overall message lies in BoJack struggles with his demons and self-sabotaging manner. It deals with mental health and addiction in a more credible form than “Thirteen Reasons Why” and “Euphoria” even though it’s about talking animals. Some viewers have complained that BoJack’s pattern of self-destruction is repetitive and monotonous. But to me that is entirely the point, he is stuck in a cycle of self-loathing and reliance of external factors for self-worth. The point of the show is not to see BoJack break out of the cycle but see him relentlessly trying to change. His need to be better even though he does not know how to be good. As Todd mentions in the last episode, “you do the hokey pokey and turn yourself arounds, that’s what it’s all about.” It is the turning yourself around that matters. It too closes to reality for some viewers but that’s entirely why it’s important. The human need for self-improvement and bettering yourself is something everyone can empathise with and that’s why we continue to root for BoJack inspite of the terrible things he does. In one-episode BoJack struggles to jog up a hill in the LA heat and collapses. A jogging baboon reminds him that it gets easier, but he has to do it every day and stay consistent. He tells him to keep trying and one day he will reach the top of the hill. “You have to do it every day that’s the hard part”. It displays that life is intricate and unlike other shows it cannot be resolved in a straightforward way where all the loose ends are tried up. Sometimes they are left dangling. It shows that in a world that does not give closure, you must find your own closure and accept the way things are and “keep running forward.”

BoJack knows that people watched his comedy show only to escape their lives and own pain. We as watchers do the same thing. But the show doesn’t allow you to escape completely but comforts you by letting you know that it’s painful for everyone at times. Todd mentions that art isn’t about the effort that goes into it but rather what people get out of it and everyone can get something from this show. BoJack Horseman can in its simplest form be a show about a drunk horse interacting with colourful characters in a world where,  a cow waitress serves steak to a customer. Or where Pinkie the Penguin works for Penguin Publishing. It can cheer you up after a lousy day. But in its fullest form , it is the most realistic depiction of life as chaotic, unpredictable and messy and that’s why it’s a must watch show.