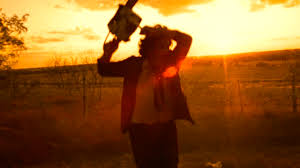 “The old way, with the sledge. See, that was better. They died better that way.”

‘The Texas Chain Saw Massacre’ is one of the most iconic horror movies of all and, as I found out, one of the best too.

The movie tells the story of Sally (Marilyn Burns), her brother Franklin (Paul A. Partain) and their friends who after Sally hears her grandfather’s grave has been vandalised. After a detour, a group of crazed outcasts – Leatherface (Gunnar Hansen), hitchhiker (Teri McMinn) and the old man (Jim Siedow) – hunt them down one-by-one.

The opening scrawl, narrated by John Larroquette, is a perfect introduction to the story and sets the tone for the movie – a grisly nervousness.

The iconic Leatherface is disturbing and creepy, butchering his victims in a house full of bones, the sound he makes equal to pig noises.

His tall, powerful demeanour, along with his silence has inspired other famous characters like Michael Myers and Jason Voorhees.

He and the other members of the family are so disturbing and creepy that every scene they are in unnerves you.

The best horrors are the ones that set an underlying tone of fear and have it carefully become more and more prevalent throughout.

The sweltering heat of the Texas sun heightens the sense of discomfort inside you and inside the friends as the movie continues.

The metaphor of pigs in a slaughterhouse at the start of the film is a great piece of foreshadowing and the writing in the film remains as consistent throughout.

The friends stumble across danger unknowingly throughout the first half of the movie and seem not to know any better.

They ignore the danger of the suspect radio interview and the ramblings of a local, continuing blindly towards their demise.

The hitchhiker they pick up creeps them out and slashes himself and Franklin with a knife.

He hints at their demise and tells them that his family are into ‘meat’.

He marks the minivan with his blood after he gets kicked out of it for his actions.

Much like pigs in a slaughterhouse, they walk towards their death without having any knowledge of what is going on.

The first to die, Kirk (William Vail), enters the house of the crazed group and walks right into Leatherface, who kills him with a sledgehammer.

The death mirrors a pig’s death back in the day when they used sledgehammers instead of bolt guns.

The rest of the five all stumble upon their deaths much like Kirk did with Sally being the sole survivor.

Sally is a ‘pig’ in this scenario too. She makes the same mistake as the rest but gets away when she realises the reality of the situation.

When she is caught by the old man, she is tied up, stored in a bag and transport to the dinner table.

She escapes when she realises that what is happening is real – when she accepts it – during the attempted slaughter of her character.

She faces the truth.

Her friends all were blind to the truth that they live in a world where men such as Leatherface exist, but Sally came to accept it.

She realises the truth after a breakdown in the famous dinner table scene – the best in the movie.

The fantastic editing by J. Larry Carroll and Sallye Richardson focus on her eyes in this scene and this combines with the score created by Wayne Bell and Tobe Hooper to show Sally’s crazed breakdown of events in her mind.

Although there is a lot of fear and horror (and gore – the guy wears a mask made from human skin!), there is also an aspect of comedy to the film.

A fine example of this is when Leatherface is scolded and hit by the old man for breaking the door down with his chainsaw during a chase rather than opening it.

That kind of charm helps to amplify the macabre world that Hooper has put his character’s into.

The blend of this sense of fear and comedy adds another layer to the film and makes it even more disturbing.

The final shot of Leatherface swinging his chainsaw around suggests a hint of innocence to the character and the suggestion reinforced by how he acts throughout the film – butchering of teenagers aside.

Tobe Hooper’s horror masterpiece is an easy-to-follow film about gore and fear but, when you look underneath its surface, you realise it is about so much more than just violence.