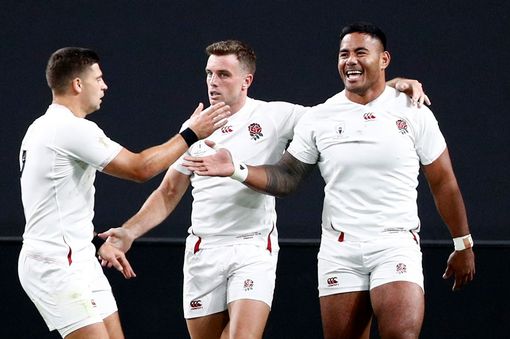 England started their Rugby World Cup (RWC) campaign with a game against Tonga. As heavy favourites, England were expected to blow the Tongans away.

A moment of silence was held before the game for Akilisi Pohiva, the Tongan Prime Minister who recently passed away. Tonga then performed their Sipi Tau, possibly bearing extra importance for the Pacific Island today.

England started the game off comfortably, monitoring Tonga before making their move and coming close to an early try.

Owen Farrell, Ireland’s sweetheart, took care of an easy penalty to get three points on the board early.

Tonga brought the game to England, somehow managing to tackle Billy Vunipola, who grew up in Tonga, and winning a penalty from it. Scrum half Tane Takulua hit a great penalty from an iffy angle, a statement of intent.

Tonga kept up their physical display, winning a third penalty in 15 minutes and bringing the ball close to England’s 22. However, it was intercepted and the ball ended up in the Tongan 22.

England applied pressure when defending, tackling well – not including Courtney Lawes. The ball was turned over and found Jonny May but nothing came of it.

A minute later, Tuilagi and Underhill combined to get the ball over the line, but the referee and TMO judged the ball to be held up. Another showcase of great defending by the Tongans, namely Piutau and Vaipulu.

Right after that, England got over the line again. This time Tuilagi’s try was given, the referee not seeing any signs of it being held up. Farrell missed the conversion from a tight angle but England had what mattered.

Takulua had an attempt to bring the difference down to two but placed his kick too far right.

England kept up their defensive display, patiently waiting to get the ball and break. Elliot Daly played a fantastic ball to Jonny May, who played it into Tuilagi for the centre’s second try of the day. Farrell, this time, converted. What could have been 8-6 is now 15-3.

A fantastic lineout won by Lawes led to another TMO decision to determine a try. It was determined that there was no try but that the Tongans had played the ball on the ground. A penalty was awarded to England which Farrell quickly took.

Kalamafoni was judged to have Anthony Watson safely via TMO and got a penalty a minute later as Maro Itoje was offside.

Farrell hit an early penalty between the posts to set the tone for the second half. England were happy to take it slow from here. They came close in the 51st minute but their third unforced handling error ruined the chance.

England use a lineout to create a maul and give Jamie George the ball back in a quick move to score their third try. Farrell converted with ease. England could have had more just two minutes later but were penalised for not releasing. Henry Slade went down from a challenge just before the penalty but felt good enough to carry on.

Tonga won the ball through a knock-on after a number of calamitous handling errors and got as close as the 5-metre line for a lineout but England turned it over for a scrum. They always appear cocky but this England team can certainly back it up.

Anthony Watson made a fantastic run late on in the 73rd minute but the ball went to waste with miscommunication between Slade and Daly.

They managed to get their bonus point try through Luke Cowan-Dickie, who took advantage of a gaping hole in the Tongan defence. Farrell finished off a great kicking game with an easy conversion to put England 35-3 up.

A great start for England. Like Ireland, they kept their opposition from getting over the line in the game – a show of their defensive qualities. They weren’t as clinical as they usually are but they didn’t need to be. Not a spectacular performance, but one wasn’t needed. Argentina and France will either be very tough or very easy but England will most likely come out of their pool on top.

Tonga put in a solid defensive display but a lot of work will have to be done on their attack. The USA will be a win for Tonga, at least according to the masses, but they will be easily dispatched by France and Argentina, but only if the latter two turn up.

Probably the tournament’s worst game so far, hopefully there won’t be many of these in the next month or so.